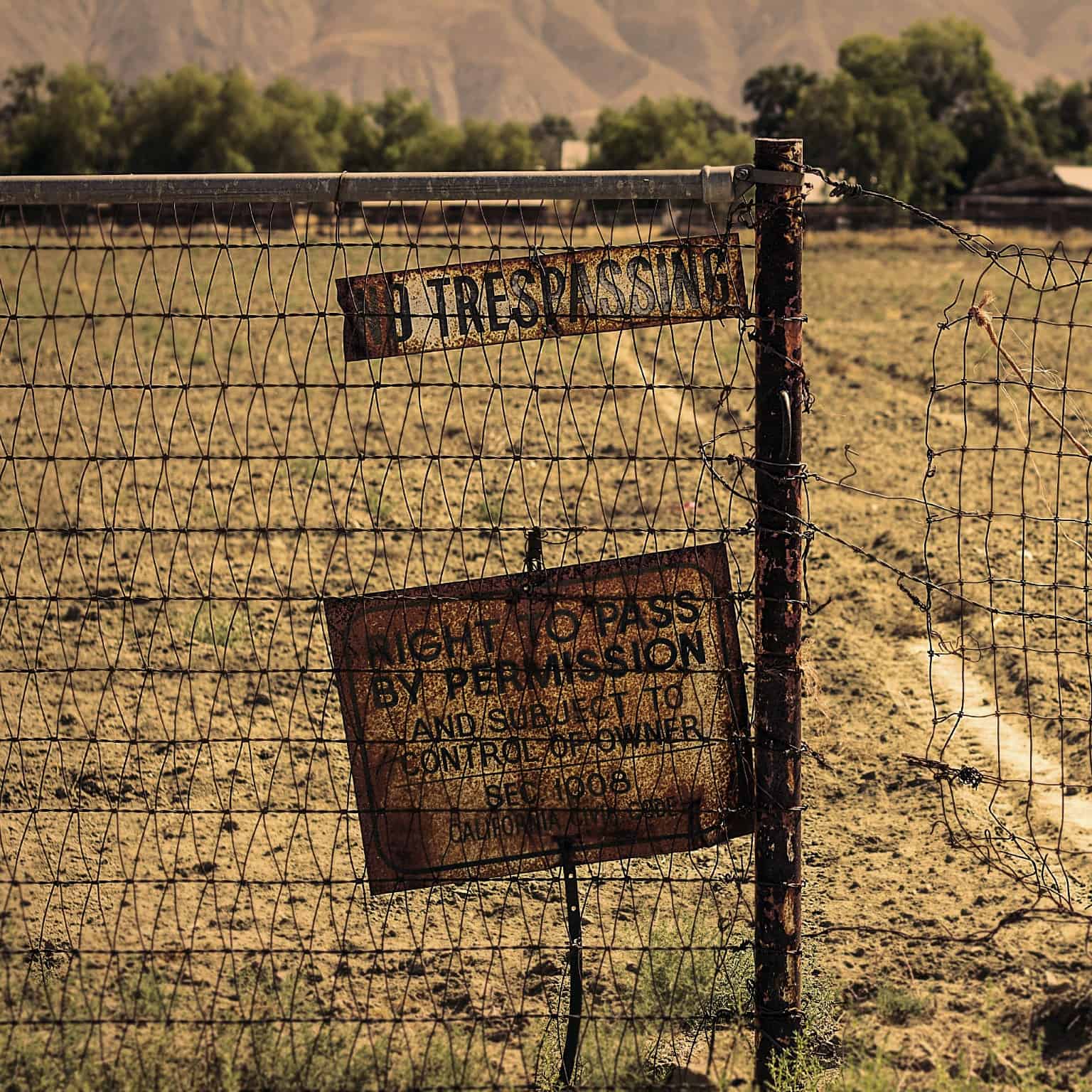 As a property owner, there are very few situations more upsetting than feeling as though your holdings are being wrongfully intruded upon: whether it is on your land or even your home and its surroundings.

It’s bad enough when someone we know stops by for a visit uninvited, but even worse when a stranger is messing around on our property without our permission and for reasons unknown.

And sometimes we do this ourselves, knowingly or not, when we are out hunting, hiking, camping, or four-wheeling.

Surprisingly, some people don’t think it is such a big deal if you aren’t hurting anything. But what’s the real story? Is trespassing really a crime?

Yes, trespassing is a crime and can come with serious legal consequences. Trespassing laws vary from state to state, and depending on the circumstances can entail fines, jail time, or both.

No matter where you live and what kind of property you own, it pays to have an understanding of trespassing laws so you know exactly where your rights begin and end.

This article will help you with some key points about trespassing as a concept and what you need to do to get the law to back you up against those who would trespass on your property. Let’s get started.

Trespassing is a criminal act that involves unlawfully entering or remaining on someone else’s property.

The legal definition of “property” varies from state to state, but broadly means land, buildings, and other items attached to the land. In some states, the term also applies to vehicles.

The term “trespassing” can also apply, and subsequently, trespassing occurs without any physical contact between the trespasser and the property, and it can also apply even without damage or destruction of someone else’s property.

Criminal trespass usually occurs when someone knowingly or willfully enters or remains on a property without the owner’s permission or with the intent to commit or further some other crime.

It is invariably considered more serious than standard trespassing, as it involves an additional element of criminality.

On the other hand, trespass, sometimes called simple trespass, is usually considered a less serious offense.

It usually involves someone entering or staying on a property without the owner’s permission. In this case, the person trespassing does so without knowing that they are trespassing.

It sounds like semantics, but it isn’t: for instance, someone who is criminally trespassing might enter a property in defiance of posted no-trespassing signage or to illegally hunt or fish on the property.

A “simple” trespasser might be a person who just got lost while hiking or hunting and wandered onto someone’s land without permission- or knowledge and intent!

What are the Consequences of Trespassing?

Once again, the consequences of trespassing vary greatly from state to state, and are also modified by the specific circumstances or the crime.

When someone trespasses on someone else’s property, they are breaking the law but the severity can range from a simple violation and small fine all the way up to serious felony charges with accompanying prison sentences.

In all cases, expect to be fined or arrested unless the private property owner wants to drop the charges.

Trespassing can also lead to civil lawsuits outside of the county or state action if a property owner decides to sue the trespasser.

How Do State Laws on Trespassing Vary?

Laws on trespassing are mostly recognizable from one state to the next but often vary in a few ways.

Strict definitions of trespassing and property are common, as are the penalty schedules for trespassing.

Pretty much every state has its own regulations for protecting property, based on type, from trespassers through the use of signage, fencing, or direct notification.

The latter especially is important for property owners to dig into since it might include certain exemptions from prosecution if the regulations aren’t followed, specific requirements for signage (color, font, size, etc.), or written warning requirements to individuals caught on the property.

It’s also worthwhile to keep an eye out for regulations that dictate when an individual can be ejected from property and whether or not the property owner can detain them for police in case of violation.

Generally speaking, most states agree that a property owner has the right to eject or bar someone at any time and for any reason. If you want detailed information, you can read our dedicated articles on trespassing laws for each state from the table below:

Aside from the typical conception of trespassing, there are special classifications that are increasingly relevant in our modern age.

One of the most important, and most hotly debated, is trespassing via use of a drone or other aerial vehicle.

Drones are increasingly sophisticated, and their aerial capabilities combined with shockingly good cameras means they represent a major threat to privacy.

Accordingly, many states are implementing special laws to ensure that drone operators stay within legal limits when passing over or operating near private property.

Such statutes usually entail restrictions on recording anyone where they have a reasonable expectation of privacy. Violation is usually a serious charge.

Other special kinds of trespassing revolve around trespassing on government-run secure installations or important infrastructure.

These instances of trespass are notable since they typically entail very serious charges, often felonies with prison sentences. You have been warned!

How Can you Protect Yourself and Your Property from Trespassers?

There are a few things that you can do to protect yourself and your property from trespassers.

The most important thing is to learn your state’s laws for posting or notifying against trespassers and follow them to the letter.

Make sure that your property is clearly marked with no trespassing signs or fenced as appropriate.

If someone does trespass on your property, you can call the police to have them given notice of trespass and removed.

Trespassers that repeatedly offend usually face progressively worse charges, so this can keep them from coming back.

Failing to abide by your state’s laws for protecting your property from trespassers can leave you open to seeing wanton trespassers walk away scot-free! Make sure you know the laws in your area and protect yourself.

Can You Use Force if You Encounter a Trespasser?

Generally, you cannot use force if you simply encounter a trespasser on your property.

You can almost never use lethal force unless the trespasser is presenting an imminent and immediate lethal threat themselves, or in some cases is committing some other forcible felony.

Your best bet, assuming there is no immediate threat to life and limb, is to first try to identify who the trespasser is and what they are doing on your property.

Talk to the trespasser and ask them to leave. If they are there accidentally or are apologetic, let them go.

If the trespasser refuses to leave, is a repeat offender, or has damaged property call the police and make a report.

Now, some states do allow a homeowner to detain a trespasser using an appropriate amount of force in some cases, but this is not something you should attempt lightly.

Simple altercations have escalated into life-or-death fights in the past. Think twice, and let the police handle it when possible!

How Can You Avoid Trespassing Yourself?

There are a few things that you can do to avoid getting into trouble for trespassing.

Second, always get permission from a property owner before entering or using their property for any reason whatsoever.

Get it in writing: If you are unsure about whether you have permission, clarify.

Additionally, be aware of any posted signs or paint markings that indicate that you are approaching and not allowed on the property.

Lastly, even if you have permission always act respectfully when on someone else’s property: don’t damage or destroy anything, and be sure to leave the property clean and undamaged when you leave.