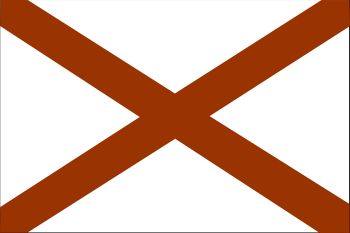 Alabama is a state with easy-to-understand trespassing laws. There aren’t too many of them, they aren’t too long, they are generally logical, and make sense.

No matter what kind of trespassing is committed in the state, it only results in misdemeanor charges, assuming no other crimes were committed while trespassing or trespassing was done with the intent of committing another crime.

You can get a quick breakdown just below on everything you need to know, and read on for more thorough analysis.

In Alabama, a vehicle is considered a building as far as the trespass law is concerned.

The person doing the trespassing does not need to have any other unlawful intent to be considered trespassing, and even if you notify the owner of any given property that you don’t have any ill intent they can still have you trespassed.

This also includes empty, unused and otherwise unimproved land. It can be nothing but a patch of weeds or wild woods, and if you don’t belong on the property you can be trespassed if notice has been given against entry.

You can be trespassed for entering into any dwelling unlawfully in the state of Alabama, no notice, no signage and no fencing required.

If you were to enter upon or enter into any building or other piece of real property which is fenced, walled off or otherwise enclosed in such a way as to exclude intruders or limit access that is also trespassing.

This also applies to completely undeveloped or unused land so long as it is posted, fenced or walled off, or specific notice has been given to you by the owner, either verbally or in writing.

Entering in defiance of any of the aforementioned methods of notice will get you charged with trespassing.

But in the case of empty or unused land that is undeveloped, if you have not received prior notice and the land is not posted or fenced under the law, it is considered that you do have permission to be on the land.

It can be revoked at any time, obviously, if you are caught but you can walk right on in so long as you do not cross fencing or ignore a posted sign.

Violating any trespass statute in the State of Alabama will result in misdemeanor charges, which could see you put in jail for up to a year and fined.

Alabama does not have too many statutes covering trespassing. You can find the most important ones below.

The following definitions are applicable to this article:

(1) BUILDING. Any structure which may be entered and utilized by persons for business, public use, lodging or the storage of goods, and such term includes any vehicle, aircraft or watercraft used for the lodging of persons or carrying on business therein, and such term includes any railroad box car or other rail equipment or trailer or tractor trailer or combination thereof.

Where a building consists of two or more units separately occupied or secure, each shall be deemed both a separate building and a part of the main building.

(2) DWELLING. A building which is used or normally used by a person for sleeping, living or lodging therein.

(3) ENTER OR REMAIN UNLAWFULLY. A person “enters or remains unlawfully” in or upon premises when he is not licensed, invited or privileged to do so.

A person who, regardless of his intent, enters or remains in or upon premises which are at the time open to the public does so with license and privilege unless he defies a lawful order not to enter or remain, personally communicated to him by the owner of such premises or other authorized person.

A person who enters or remains upon unimproved and apparently unused land, which is neither fenced nor otherwise enclosed in a manner designed to exclude intruders, does so with license and privileges unless notice against trespass is personally communicated to him by the owner of such land or other authorized person, or unless such notice is given by posting in a conspicuous manner.

(4) POSTING IN A CONSPICUOUS MANNER. A sign or signs posted on the property, reasonably likely to come to the attention of intruders, indicating that entry is forbidden or the placement of identifying purple paint marks on trees or posts on the property, provided that the marks satisfy all of the following:

(5) PREMISES. Such term includes any “building,” as herein defined, and any real property.

Article 1 – Burglary and Criminal Trespass. Section 13A-7-2 – Criminal trespass in the first degree.

Criminal trespass in the first degree.

(a) A person is guilty of criminal trespass in the first degree if he knowingly enters or remains unlawfully in a dwelling.

(b) Criminal trespass in the first degree is a Class A misdemeanor.

Article 1 – Burglary and Criminal Trespass. Section 13A-7-3 – Criminal trespass in the second degree.

Criminal trespass in the second degree.

(a) A person is guilty of criminal trespass in the second degree if he knowingly enters or remains unlawfully in a building or upon real property which is fenced or enclosed in a manner designed to exclude intruders.

(b) Criminal trespass in the second degree is a Class C misdemeanor.

Article 1 – Burglary and Criminal Trespass. Section 13A-7-4 – Criminal trespass in the third degree.

Criminal trespass in the third degree.

(a) A person is guilty of criminal trespass in the third degree when he knowingly enters or remains unlawfully in or upon premises.

(b) Criminal trespass in the third degree is a violation.