It’s safe to say that the striker-fired pistol market today is dominated by Glock (as it has been for sometime), and while there’s no denying that Glock made readily available quality guns, there are a variety of great pistols out there. If you want a pistol other than Glock, you have many options. Two of these options are the Walther PPQ and HK VP9.

The PPQ and the VP9 both stand out from the Glock in a number of ways. While the basic design is the same as the Glock, both the PPQ and VP9 feature improved ergonomics that could make them more appealing to different shooters.

Let’s go over the PPQ and VP9 in detail so you can understand the main differences between the two pistols. 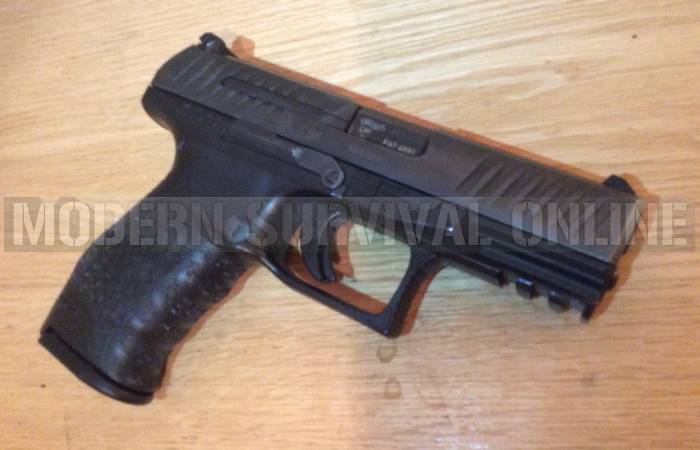 The Walther PPQ is slightly older than the VP9, being released in 2011. The PPQ is simply an updated version of their previous P99 series of pistols.

While the P99 was striker fired, it was unique in that the first trigger pull is long while all subsequent shots are short. The P99 also features a decocker button to put the pistol back to the double action pull.

The P99 was quite successful in Europe, but noticeably less so in the United States. It seems that American shooters prefer their striker fired pistols to have a single consistent trigger pull like the Glock.

A video going over the Walther PPQ:

Walther PPQ M2: Does it Live Up to the Hype?

Walther picked up on this and released the PPQ, which unlike the P99 is not a DA/SA design, and has a consistent trigger pull. However, this trigger is also the main hallmark of the PPQ: it’s no ordinary trigger, at least not when compared to the Glock.

Whereas other striker fired pistols such as Glocks will have a little bit of creep before the gun can be fired, the PPQ’s trigger is noticeably lighter and crisper. This allows the shooter to not only have a more pleasurable shooting experience; it also allows them to fire faster follow up shots.

A major advantage to the PPQ is its ergonomics, particularly in the grip. The engineers of Walther spent much time (as in years) in developing the ergonomics for their P99 and PPQ pistols, wanting the gun to have a natural point of aim and for it to feel as if it melts in your hand.  Ergonomics are entirely based on one’s personal preference, but most agree that the ergonomics to the PPQ are superior over the more block-like feel of the Glock.

The HK VP9 is another highly regarded striker fired pistol and one of the main rivals to the PPQ.  As with the PPQ, there is a lot of history in the VP9’s development.

The only issue with the VP70 was that it was expensive, and admittedly not the best design in the world, so it didn’t see much success. Glock perfected making the polymer framed striker fired pistol, which is why they were so successful.

HK went on to mainly make hammer fired pistols, eventually producing the HK USP and later the HK P30 with improved ergonomics over the USP. They were still itching to get back into the striker fired market, however, so they continued their VP series and produced the VP9 in 9mm (15 rounds) in 2014 and then the VP40 in .40 S&W (13 rounds) in 2015.

Shooting the HK VP9: Does it Beat The Rest?

The HK VP9’s ergonomics and looks closely resemble that of the HK P30. The trigger on the VP9 is improved over the Glock and closely rivals that of the PPQ.

There are two major appealing points to the VP9 in terms of its ergonomics. The first is the addition of what are called ‘bunny ears,’ or short polymer protrusions (on the right hand and left hand sides of the slide). These allow the shooter to grip the VP9’s slide firmer to rack it, should one ever be in wet conditions.

The other major plus of the VP9’s ergonomics is that not only can the back straps of the grips be swapped out like with the PPQ, but the sides of the grips can also be swapped out. This means you can literally make the VP9 as comfortable as you want it to.

So the main question is: should you go with the PPQ or the VP9? Both pistols are high quality, come from reputable manufacturers, and underwent years of development. So it’s safe to say that you can’t go wrong in choosing either pistol.

In terms of ergonomics, it’s entirely up to you as to whether you prefer the PPQ or the VP9. To determine which one you like more, you’re just going to have to hold them for yourself in a sporting goods store.

The biggest point of contention between the PPQ and the VP9 however, is in the trigger. When the PPQ was released, Walther marketed it as having the best pull of any production striker fired pistol. When HK released the VP9, however, they also claimed that the VP9’s trigger was the best on the market.

Both pistols also utilize a Picatinny accessory rail for adding lights and lasers. They are roughly the same size and weight, although the VP9 is just a tad larger. Both are suitable for concealed carry or home defense. In addition, price between the PPQ and the VP9 is about the same, though usually the PPQ can be had for just a tad less.

This video shows a contrast between the PPQ and VP9:

When it comes down to it, both are top-tier German manufactured pistols that were the culmination of many years of development. Both are going to do exactly what you ask of them, so in that regards, you won’t be disappointed in either. Whichever pistol you choose should be based on which one you prefer when handling or when shooting on the range.

The PPQ and the VP9 are great alternatives to the Glock series of handguns because they both offer a number of out-of-the-box improvements. That’s not to say that they are superior in quality to Glock, but it is to say that you may prefer them for the reasons this article has gone over.