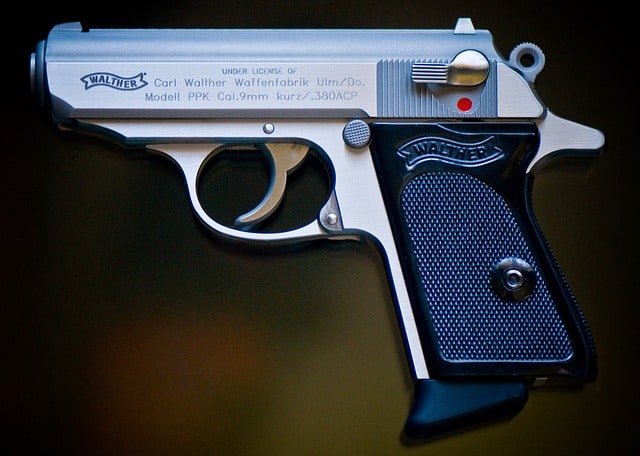 Walther is a gun company that always seems to introduce a new innovative feature with each gun they make. They’ve gone from a simple target rifle manufacturer in the 1880s to now being one of the most famous firearms manufacturers in the entire world.

The special thing about Walther is how each of their handguns is unique from other guns in their respective classes. Some of their guns have been enormously successful, to the point of becoming iconic, and others not so much.

But there’s no denying that Walther is a gun company to be reckoned with when it comes to innovation and reliability.

Regardless of whether you want to begin collecting Walthers or are just looking for a single Walther handgun to own, take heart in knowing that when you buy a Walther, you’re buying a gun that’s going to last you for life.

Here are the top five Walther pistols to own, presented in the order that they were made:

The PPK is probably the gun you think of first when you hear the name ‘Walther.’  After all, the Walther PPK in .32 ACP is well known for being the sidearm of choice for James Bond 007.

There are more reasons to own a PPK (or a PPK/S) than just to say that you own the James Bond gun.

First and foremost, the PPK was one of the most innovative pistols of its time. It has been so successful that numerous other famous pistols, such as the Russian Makarov, have since copied it.

Walther originally released the PP in 1929. It became the first successful blowback double action single action pistol ever released. A year later, Walther cut down the grip and barrel to make the most concealable PPK.

The PPK quickly found favor as a concealment and a backup weapon with law enforcement and people across the globe. It remained a favorite for many decades.

The PPK built a reputation for durability, reliability, accuracy, and slimness. By all accounts, it was the gun that brought Walther worldwide attention.

Because of the Gun Control Act of 1968, the PPK was deemed too small to be imported into the United States.

Walther remedied this situation by taking the slide and barrel of the PPK and slapping it on the frame of the PP to create the PPK/S. The PPK/S holds one more round than the PPK in .32 (8 vs. 7-round) and .380 (7 vs. 6-round).

While the PPK has been largely eclipsed by more modern pistols in its class that are lighter in weight, it truly is a timeless and proven design.  It’s an accurate and well-balanced firearm that’s equally at home in your gun safe as it is in your waistband.

Another highly successful design from Walther is the P38. Like the PPK, its basic lock-breech design is seen in many other famous pistols, including the Beretta 92. The magazine holds eight rounds of 9mm and can be released by the European style heel mag release.

The P38 was designed chiefly as a military sidearm for the German Army in the late 1930s. Not only did it serve with distinction in World War II, but it also continued to be used by German police and military units in the decades afterward. It was only completely phased out in 2004 which says a lot about the overall quality of the design.

While the P38 was not the first DA/SA pistol ever produced, it was the first successful such pistol. Like the Beretta 92, the safety is located on the slide and acts as a decocker when depressed.

A loaded chamber indicator slightly protrudes out of the rear of the slide when the weapon is chambered. Also, the P38 also uses the same open slide design that the Beretta 92 has become famous for.

Today, P38’s can be found floating on the used market in the $500 to $700 range. Surplus parts and magazines are relatively plentiful. For these reasons, the P38 would even be an appropriate choice as an SHTF sidearm.

Note: the aluminum-framed version of the P38 is the P1. Other than this, the two guns are identical and spare parts are interchangeable.

The Walther P5 is affectionately known by Walther aficionados as the ‘forgotten Walther.’

While successful with police units in Europe, it gained significantly less attention in the United States. However, there are still some who consider the P5 to be the finest Walther ever made, and there are good reasons why.

The P5 is essentially an updated version of the P38. The story goes that in the 1970s, German police were looking for new sidearms to replace the World War II-era ones that they had been using.

Many companies submitted designs, and Walther’s entry was the P5. It was quickly accepted by multiple police agencies in Germany, Finland, and the Netherlands (the latter of whom issued it until 2013).

Like the P38, the P5 utilizes a locked breach design with a heel magazine release (though it does not have the open slide design of the P38).

It fires the 9mm Luger round from 8-round magazines, but it will accept P38 magazines if the magazine heel is swapped out for the P38 heel.

One of the most notable features of the P5 is how the spent shell casings eject to the left side of the frame rather than the right. This is obviously a major plus for left-handed shooters.

The reason for this design in the P5 was because if a jam were to occur, the shooter would be able to see it instantly without rotating the gun to view the ejection on the other side.

All in all, the P5 is a fantastically well-made firearm. Admittedly it’s better suited these days as a collector’s item rather than as a duty or a concealed carry firearm.

This has nothing to do with the quality of the weapon, but rather with the fact that the P5 is no longer produced. This means spare parts and accessories are difficult and expensive to find.

The P99 was Walther’s first polymer framed striker fired handgun, riding on the heels of the Glock tidal wave. The P99 is still far from being a Glock copy.

Whereas the Glock and most other striker fired handguns have one consistent trigger pull, the P99 utilizes what Walther calls the Anti-Stress (AS) firing system that is modeled more after a DA/SA handgun.

It works like a double action pistol. The first trigger pull is long and heavy. After the gun cycles, all subsequent shots are much shorter and in a single action.

A decocker is present on the slide that returns the pistol to the double action pull mode when depressed for safe carrying. However, the unique feature about the P99 is how it can be cocked.

When the gun is in double action mode, and the slide is pulled back slightly, the ‘AS’ mode is activated. In this position, the trigger is still in the position of the DA mode but has virtually no take-up, similar to if you were to manually cock a DA/SA hammer fired pistol.

The P99 fires from 15 shot magazines in 9mm or 12 shots in .40 S&W. It features an ambidextrous paddle magazine release on the side.

While successful in Europe, like the P5, it garnered significantly less attention in the United States.

Walther recognized this and decided to update the P99 with a single continuous trigger pull. The result was the PPQ.

As mentioned above, the PPQ is essentially the P99 only with the same trigger pull for each shot (called the ‘Quick Defense’ trigger by Walther), which is like the Glock.

This trigger is widely regarded as being one of the smoothest and lightest of any production pistol on the marketplace.

The M2 model features a reversible push button release. All accessories between the M1 and M2 models are compatible except for the magazines.

The PPQ has become the flagship model in Walther’s lineup. In addition to its smooth trigger, it has gained a reputation for improved ergonomics, accuracy, and reliability.

Walther produces top quality pistols designed to be used for life. Just as importantly, their designs are among the most innovative of any gun manufacturer in the world.

While all their handguns are undoubtedly well made, the PPK, P38, P5, P99, and PPQ are the five that deserve the most recognition.

We will not spam you.
Print
16
Shares

4 thoughts on “Top 5 Walther Pistols to Own”