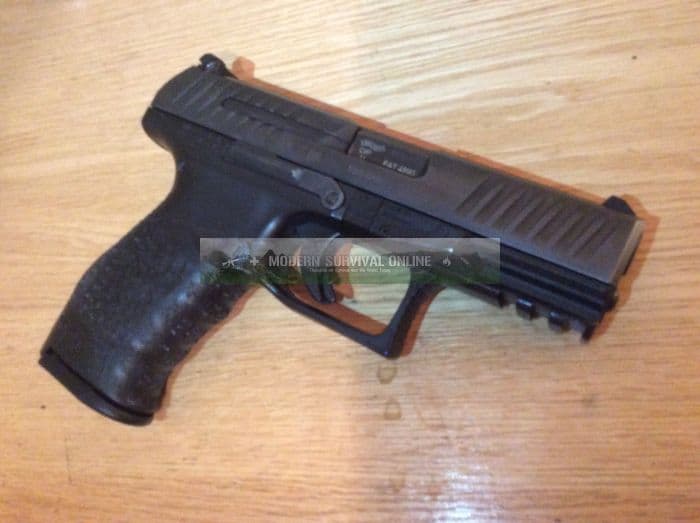 Ever since the Glock first became popular in the 1980s, there has been a nearly countless number of polymer framed, striker fired pistols that adopted the same concept. While some of these pistols may have fallen short of the high bar that Glock set, others exceeded it. One such example is the Walther PPQ.

Walther has always been a gun manufacturer who has introduced a unique innovation with each new firearm released, and the PPQ is no exception. When the M1 model was first released in 2011, the big selling point was its trigger, purported to be the smoothest of any production striker fired pistol in the world.

There was just one significant criticism of the PPQ from American shooters. They disliked the European-style paddle magazine release. Walther listened and in 2013 released a revised model that featured an American-style push button release instead. This was the PPQ M2.

The first thing to talk about with the PPQ is its ergonomics, which are stellar. While obviously, opinions on pistol ergonomics are subjectively biased, reaction to the feel of the grip on the PPQ has been overwhelmingly positive.

Walther has long been known for producing some of the most ergonomic pistols on the market. The texturing on the PPQ’s grip is designed to be more aggressive than that of the earlier P99 model. The grip also has three-fingered grooves that help the grip mold into the hand better and make slippage in wet environments less of an issue.

The PPQ also sells with three separate back straps: small, medium, and large (medium comes standard on the gun). Simply pop out the pin at the base of a grip with a screwdriver, swap out the back, and then push the pin back inside.

The PPQ is equally as simple as a Glock. There are no external safeties on the gun, other than the lever on the front of the trigger that must be depressed for the rest of the trigger to pull. The slide release is present on both sides of the gun for true ambidexterity, and it is larger and easier to release than the Glock as well.

While the push button magazine release is not truly ambidextrous, it is reversible, and therefore adaptable for left-handed shooters.

The PPQ also features a loaded chamber indicator that you will find near the ejection port. When the weapon is chambered, the extractor will be slightly pulled back and reveal a red marking that signifies the gun is loaded. Even in dark conditions, you can feel the extractor has been pulled back to tell you there is a round in the chamber is loaded.

On the dust cover of the PPQ, you will find a Picatinny accessory rail upon which you can mount lights, lasers, or whatever accessories you like to add to your pistols. A light, in particular, would be a good thing to add if you want to use the PPQ as a nightstand gun and want to have a two-handed grip over your gun instead of having one hand on the gun and one hand holding the light.

But the greatest feature of the PPQ and the single feature that has caused it to sell so well for Walther is the trigger. In fact, the trigger is a category of its own. Walther claims it is the smoothest and lightest trigger of any production striker fired pistol on the market, and you’ll be inclined to believe it when you shoot it for yourself.

The average trigger pull on the PPQ is between 4.5-5.5 pounds (if you use a trigger gauge, the trigger pull on any pistol won’t be identical with each shot). There’s a short and very smooth take-up before you get to the break, which is very crisp has a mere 0.1-inch reset. This neat of a trigger means the PPQ is excellent for firing follow-up shots.

As usual with Walther firearms, the PPQ has already proved in the five years of its existence to be an extraordinarily reliable firearm, on par with Glock. It will effortlessly feed any kind of ammo that you put through it. I’ve never encountered any jams or misfires of any kind with my personal PPQ.

The durability of the PPQ is also noteworthy. As with Glock, Walther coats the steel slide in a tough Tenifer finish, which will easily resist moisture and physical force. You may get a few light scratches here and there, but you can use the PPQ when it’s raining hard out, wipe it down afterward, and you won’t need to worry about rust or corrosion getting on the gun.

The polymer frame of the PPQ is also durable just like a Glock, and there have been very few reports of it ever failing or cracking.

The PPQ is a blast to shoot. Part of this is due to the incredible trigger. The PPQ comes equipped with standard white three dot sights (which are made of polymer, unfortunately.) It would be better if the sights were metal like the rest of the slide, which is very easy to see when preparing to shoot.

The PPQ is also a highly accurate gun for its type. Again, the natural ergonomics and trigger no doubt play a role in this. At distances of twenty to thirty yards, I have found my PPQ to be among the most accurate 9mm pistols that I have ever shot.

As is customary with pistols these days, the PPQ is extraordinarily simple to field strip.

Simply reverse these steps to reassemble.

While my personal PPQ is the 9mm M2 model with a 4-inch barrel, Walther offers the PPQ in many other variations.

Walther currently offers the PPQ in .22 LR, 9mm, .40 S&W, and .45 ACP. The 9mm version is also available with the paddle release as the M1, while the .22 LR, 9mm, and .40 S&W versions are also offered with a longer 5-inch barrel for target shooting or competition use.

The capacity of the PPQ for each of the calibers is as follows:

9mm or .40 S&W P99 magazines will also work in the M1 variants of the PPQ with the paddle release; they will not work in the M2 models like mine that have the push button magazine release instead.

While customization choices on the PPQ are currently limited in contrast to more commonplace guns such as Glock or the M&P, you still have options. The number of options is only likely to grow as the PPQ becomes more popular.

There are numerous holsters of all types for the PPQ that you can find from many manufacturers, include reputable ones such as Galco.

As far as customization of the PPQ is concerned, you can have the trigger swapped out for a better one, though why would you want to? You can replace the plastic guide rod that comes standard on the gun with a metal or stainless steel one (which I have done, as it’s heavier and helps to lower recoil just a tad). You can also replace the sights with a variety of higher quality options. I would suggest replacing the plastic sights on the PPQ with metal ones.

Priced in the $500 to $600 range, the PPQ represents a great value for the everyman. You’re getting a lot of gun for the money: excellent ergonomics, superb reliability and durability, decent accuracy, and a dream of a trigger. There are only a couple of minor complaints that I have about the PPQ, such as the sights being plastic, but this can be remedied easily.

I would highly recommend the PPQ to anyone looking for a 9mm pistol but who wants something other than a Glock. The PPQ is small and light enough for concealed carry or everyday carry purposes if necessary. It’s also large enough to use as a fighting weapon or sidearm.

Regardless of whether you use the PPQ for home defense, concealed carry, or just for fun target shooting, you simply can’t go wrong with it. Right now, the PPQ is the pinnacle of what Walther has achieved, and it will be very difficult for them to supplant it.