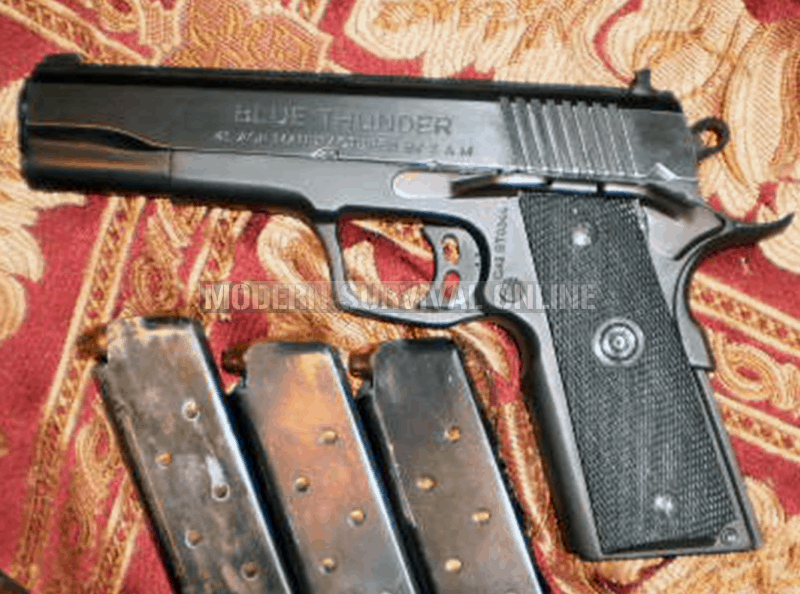 Ahhh, guns, my favorite subject. What are the top 5 pistols, or should we say handguns, for a SHTF event? Well, that would depend on a few factors.

However, before I go recommending anything, the first thing I will recommend is that if you have no experience handling firearms, you need to go and get professional training. If you don’t know where to go then you should ask the guy selling the gun to you if they offer training classes or if they can recommend one.

A weapon is only as useful as the person wielding it is skilled. So you can go out and buy the biggest, baddest, most expensive hand gun in the world but if you don’t know how to use it then what good is it really?

This factor depends on the user’s experience with firearms. If the user is experienced with handguns then I would strongly suggest a high capacity semiautomatic pistol. However, if the user is inexperienced with handguns I would strongly suggest that they stick with the simplicity of a revolver. While you’re at it, don’t forget to get a good holster and the best gun belt after doing your due diligence of course.

Simplicity of a revolver

Revolvers are pretty simple, so there isn’t a lot to learn or remember with a revolver. There are no external safeties to be concerned about; the safety is your finger (which is the most reliable safety I might add). There are no concerns about racking the slide and de-cocking the weapon with a revolver either.

De-cocking a pistol can be dangerous if you are inexperienced, especially if the pistol doesn’t have a de-cock mode. Even with a de-cock function some are still dangerous. Of course de-cocking doesn’t apply with striker fired guns (which I abhor, but we’ll get to that later).

This video shows how a revolver works.

How a Revolver Works

With a double action revolver (or double/single action) it’s as simple as:

If it’s a single action revolver like a Colt .45 or similar (cowboy style) then to use the handgun you perform the following steps. 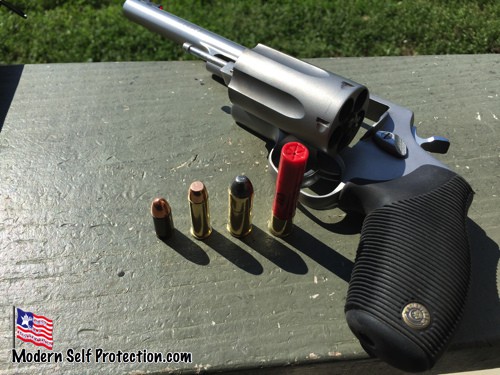 These two revolvers fire both .410 shot shells as well as .45 LC cartridges. They are both also double/single action and can be a suitable choice for SHTF as the .45 LC is fairly common. After all, the .45 LC is one of the oldest handgun cartridges, having been around since 1872.

The .45 LC loaded to higher pressures can take game like whitetail deer from short distances from a handgun. It is also a very good man stopper even in lower pressure loads. The .410 shot shell spreads quite a bit from a short 3” barrel. But if you get the 6” barrel version the gun is better balanced, holds a tighter shot pattern (barely) for small game, and has a higher muzzle pressure with the .45 LC.

Between these two handguns I can’t really say that one is better than the other. But what I can say is that the Taurus Judge is going to cost less than the Smith & Wesson.

Taking all of these things into consideration I would say that the stainless steel, 3” magnum chambered, Taurus Judge with a 6” barrel, is an excellent choice for a SHTF handgun. With its versatility you could probably get by with just that if you could only buy one gun and you need it to serve multiple purposes. Another reason would be that you are trying to keep your pack lighter and don’t want to carry a rifle.

Another good choice for a SHTF handgun in a revolver is a .357 magnum. I would recommend getting one with a 4” barrel. The reason why is that it is a happy medium between the conceal ability of a 2” barreled snub nosed, and the higher pressures, greater accuracy, and range of a 6” barrel.

The 4” barrel will still allow you to carry the gun concealed fairly easily, and it will be suitable for hunting. I suppose that you could hunt with a snub nosed, but it would definitely not be ideal. The 4” will cover both self defense and hunting quite well.

Another good point for the .357 magnum is that beside the .357 magnum cartridge, it will also fire the .38 special cartridge. This gives you a little more options for ammo availability. In a pinch you can even chamber and fire .38 short colt and .38 long colt cartridges from a .357 magnum revolver.

Keep in mind though, if you fire a lot of shorter cartridges, make sure to clean the chambers in the cylinder thoroughly before chambering a .357 magnum cartridge again. If you don’t, there could be issues with the cartridge fully seating due to chamber fouling.

This choice, just like any other handgun that offers it, I would also recommend a stainless steel version. Stainless steel is more durable when faced with the elements, and there is no finish to rub off in a holster or pocket.

The make and model of the .357 magnum revolver doesn’t really matter, as long as it is a quality firearm. Never trust your life to a cheap firearm. By the way, in this use of the word, cheap doesn’t mean inexpensive, cheap means poorly made. I wrote an article a short time back about cheap vs. inexpensive handguns that can clear that up for you.

My next suggestions are for semiautomatic pistols. As mentioned at the beginning of the article, if you have no or little experience handling a semiautomatic pistol, you should get professional training. Just because someone may have handled a .22 or .38 or whatever revolver before, or their uncle handed them a “9” that they emptied the magazine from, doesn’t mean they can dive right in to a semiautomatic on their own. GET TRAINING.

This video shows how a semiautomatic pistol works. As you can easily see it is much more complex than a revolver.

How A Semi-Automatic Handgun Works

Now that we cleared that up, if you want to get a pistol for self defense in case of SHTF, there are literally 100’s of options. The first consideration is caliber. Do you solely intend for this handgun to be for self defense against humans? If so, then a 9mm or .40 caliber pistol will do quite well for this.

These calibers were actually designed with shooting humans in mind. Also, because they are prolific in military and police use, the ammunition availability will probably be pretty fair even after supply lines dry up.

The 9mm and .40 caliber will also handle medium game somewhat reliably. Humans, large dogs, or whatever you might encounter up to about 200 pounds in the woods can be dealt with reasonably with these calibers. However, if you live where there are larger animals, or if you also want to hunt with the pistol, then I would recommend moving up to a .45 ACP.

The .45 ACP was also designed with the human animal in mind being a cartridge designed for a military sidearm. However some people actually like to deer hunt with this caliber. With a quality, accurate pistol a deer can be taken at ranges out to about 40-50 yards.

Maybe even farther out if you are awesome. Also, because the cartridge has been in production in most parts of the world for over 100 years ammo availability should not be an issue.

Now, the make or model of any of these calibers pistols relies solely on you. Myself, I prefer stainless steel pistols with a hammer and decocker, but many other people prefer plastic striker fired guns.

For the sake of this article I will not suggest any particular brand of pistol. I will only say that you should buy the best quality firearm that you can afford. You do not want to trust your life to a cheap gun. Again, cheap here meaning of poor quality, like I mentioned earlier in the article I wrote another article that discusses this subject.

Since I listed three calibers for the semiautomatic, and I’m going to mention two here, then technically I listed more than “5 top guns”, but it had to be done to cover all the ground.

.44 magnum (available in a revolver or semiautomatic)

There are a couple of other .50 caliber semiautomatics available but the ammunition is somewhat obscure so I wouldn’t get one for SHTF scenarios.

Some people say that their go to gun for SHTF would be a .22 LR because they will be able to carry a lot more ammunition with them. I can’t argue that point, but I can argue that if this is the only gun you can have then it cannot possibly meet all of your needs, especially if there are large, dangerous animals where you live.

Still others have sworn by the .22 magnum semiautomatic Kel Tec PMR 30. This is a polymer pistol that holds 30 rounds of .22 magnum ammunition. A neat gun, no doubt, but I don’t think I would swear by it as my only handgun or weapon in case of SHTF.

Here is a video showing the effect of a .22 magnum fired into ballistics gel.

22 Magnum for Self Defense

Some may say “oh, a .22”, but I guarantee you that if they are on the receiving end of ANY firearm and they start hearing BANG, BANG, BANG, they are ready to go. Especially if when they hear bangs happening they also start feeling extreme pain in a part of their body.

I’m not going to sit here and tell you a .22 is the best gun, but I’m also not going to tell you to leave it behind if that’s all you have. I myself hope that if the S ever hits the F, I will be able to get to my safe place with all of my stuff.

If I have to hunker down at home (bug in), then I am fairly heavily armed, better than average I’d say. Even for an American. I can only hope that if anyone on the outside wants inside, that favor smiles on me.