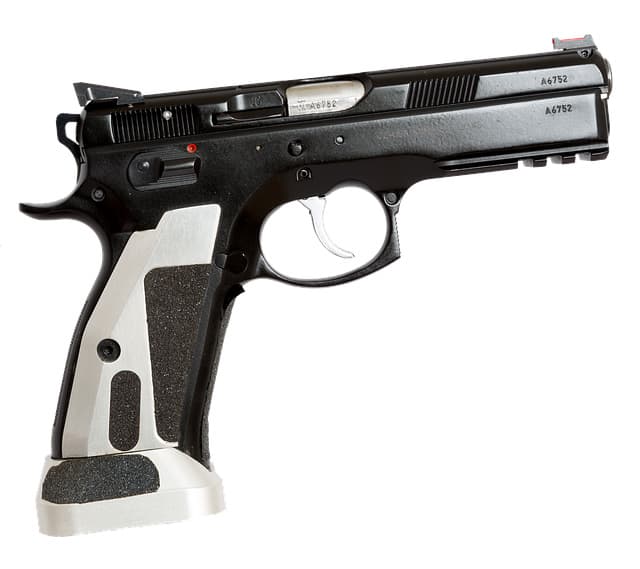 Of all the topics subject to debate in the world of firearms, the one that probably receives the most attention is the debate of 9mm vs. .45 ACP.  While some would say that this debate has gone on for far too long, others will be quick to point out that choosing a personal caliber is a decision that can only be made after much thought and research.

The purpose of this article isn’t to claim superiority of one firearm caliber over the other, but rather to present the arguments for or against each one. After going over the basics and pros and cons of each caliber, we’ll delve further into specific categories and the advantages a particular caliber has over the other under each category.

This article isn’t for those who have already chosen a caliber for their pistol, rather, it is for those of you who are trying to decide and have narrowed your options down to 9mm or .45.  The important thing for you to know up front is that these calibers are currently the two most conventional ones in the United States and have been around for many years.  Neither of them is a bad round, and both will probably do what you expect them to.  However, if you’re still unable to decide, hopefully, the information in this article will be able to help you.

Let’s start by talking about the 9mm…

The 9mm Luger round has a total bullet diameter of 0.355 inches.  It was designed originally for use by the German military in 1902 for the Luger pistol, which was then to become their standard service pistol.

After that, the 9mm grew rapidly in popularity all over the world.  Countries saw it as a versatile, good all-round service caliber and had new military sidearms chambered for it, such as the Browning Hi-Power and Walther P38, both of which served in World War II.

The 9mm continued to become even more widespread after the Second World War, and eventually became the standard pistol round of NATO.  Today, the overwhelming majority of armies around the globe use sidearms chambered for 9mm.

The 9mm is also the most popular pistol round in the United States.  Not only has it found favor with law enforcement and the United States military (who use the round in the current standard issue Beretta M9 pistol), but it is also used heavily by civilians for concealed carry, home defense, target shooting, or by preppers for SHTF sidearms.

There are many advantages to owning a pistol chambered in 9mm.  For one thing, because of its immense popularity, 9mm is extremely easy to find and currently the cheapest pistol round to buy. These days, you can expect to buy a box of 50 rounds of 9mm FMJ for around the $10 to $15 range, which is around half the price of what you can expect to pay for .45.

Because of its smaller size, pistols can carry far more rounds of 9mm in the magazine in comparison to other pistols.  The Glock 17, for instance, holds 17 rounds of 9mm in the magazine.  The Canik TP9-series of pistols holds 18 rounds.  The Springfield XD-series holds 19 rounds.  You get the idea; double stacked pistols with 9mm hold a lot of bullets.

The 9mm is also easy to shoot with mild recoil, which makes it a great round to use in teaching new shooters.  The mild recoil also means that you can get multiple shots off quickly without being thrown off your target.

On the other hand, opponents of the 9mm will be quick to point out some disadvantages.  It has been claimed that the 9mm, at least in FMJ form, is lacking in overall stopping power and delivers less energy and wound size than .45 ACP does.

The .45 ACP (Automatic Colt Pistol) round has a total bullet diameter of 0.425 inches.  This is a true American caliber as it was originally designed by John Browning for use in the Colt M1911 pistol; this reason alone is often what makes people grow so attached to it.

In its more than hundred year service life, the .45 has gained a reputation for being a so-called ‘one shot man stopper,’ with the idea that it can bring down a human sized target with only a single bullet.

There is no doubt that the .45 ACP is a great round of self-defense even in the form of FMJ ‘ball’ ammo.  The diameter is also substantially larger than the 9mm, which naturally creates a larger wound cavity or hole when striking a target.

Despite being a large round, recoil for the .45 is still generally relatively soft or mild.  While it has definitely got a larger kick to it than the 9mm, the .45 has gained a reputation by some novice shooters for being a high-kicking round, which simply isn’t true.

On the other hand, .45 does have its cons.  First and foremost, it’s more expensive than 9mm (nearly twice as much), so it’s not the best round for the budget conscious shooter.

Since it’s a larger round, this also means that pistols chambered for .45 typically carry less than those chambered for 9mm.  The 1911 holds just 7-8 rounds in the standard magazine, and even ‘high capacity’ .45 pistols rarely hold more than 12-13 rounds.  The FN FNX Tactical is currently the highest capacity .45 pistol in the market, at 15 rounds, and it’s a very big and bulky gun.

Still, there’s no denying that the .45 packs a wallop, which may make up for its low round count.  Next, let’s put the 9mm and .45 head-to-head in a few key categories and see how they perform:

Remember that, in the end, both 9mm and .45 are pistol calibers and therefore underpowered compared to rifle rounds. Also remember that shot placement, or where you shoot an attacker, is more important than the round used itself.  In other words, the differences between 9mm and .45 are fairly marginal when you look at the bigger picture.

In that regard, the debate between 9mm and .45 isn’t really a debate over which caliber is superior. People are still arguing over which one is better suited to the tastes of a specific shooter.  You may find that you see merits in both 9mm and .45 and decide to buy a pistol in both calibers.  After all, two is always better than one, right?