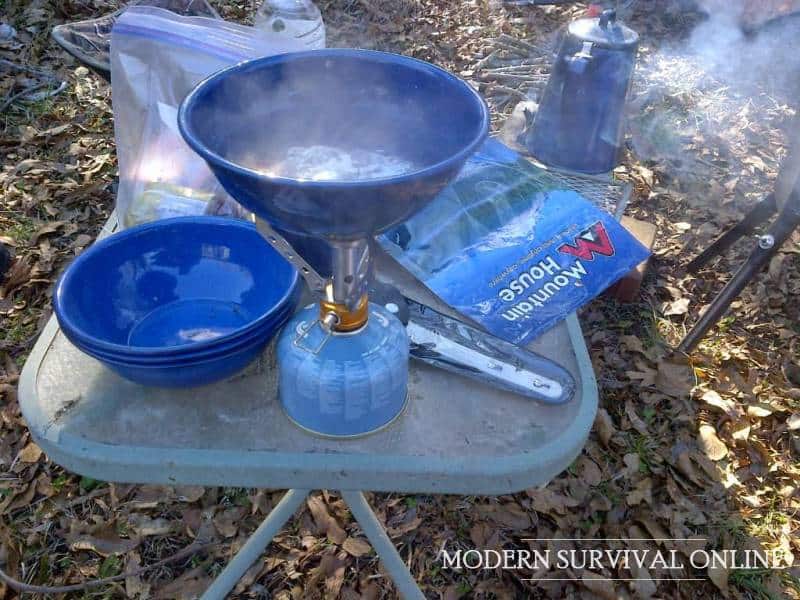 Cooking during a SHTF event is a very tricky proposition. If proper sight, sound, and smell OPSEC is not observed, everyone within a one mile radius could know you and your family not only still have food, but also have the means to prepare it.

During a brief disaster, like the power going out due to a seasonal storm, using the backyard grill will likely not be problematic.

But, during a long-term disaster of a more serious nature allowing the tantalizing scent of grilled meat to waft onto neighboring properties and nearby roads could be a deadly mistake.

Past disasters and emergencies may have convinced some non-preppers the value of stocking up on non-perishables, but those event’s didn’t necessarily mean lack of electricity in the long-term. It will still take only roughly three days for the millions of unprepared folks around the country to run out of food to eat.

Even if you have been friends with your neighbors for years, the smell of meat on your grill when the bellies of their children are empty can provoke a violent confrontation that could cost your family all of its food, cooking source, or worse.

Preppers who live in rural areas will have a distinct advantage from a SHTF cooking OPSEC perspective, over their small acreage, small town, suburban, and urban peers.

Cooking discipline is far easier to achieve when you have zero neighbors. Yet, smell and sound can travel a lot further than many may realize, especially on a day when the wind is not with you.

I only have to go one quarter of a mile down our half mile private road to smell the food our the people at the house across the grilling in their own backyard.

No one other than your family or members of your prepper tribe also residing at your retreat, should have even the faintest idea that you have food, and means of making it in an off the grid manner.

Cooking food in a sun over will take a lot longer than popping it onto a grill or campstove, but the glass or plexiglass top cover on the off grid oven will greatly curtail the scent.

Most solar ovens are capable of reaching a temperature of 400 degrees F. The average cook time for most foods typically prepared in a regular kitchen oven are 250 to 350 degrees – making this quiet off grid cooking method that will help you exercise proper sight, sound, and scent discipline.

You can bake, broil, or roast just about anything in a solar oven that you would in a conventional oven or on a charcoal grill.

Solar ovens (or solar cookers as they are also called) can work during the fall and winter, but take a lot longer to reach temperature, and may not be well suited for meat preparation during the colder months.

If your home kitchen does not include a gas oven, investing in one even if it means converting the hookup from electric, should be made a prepping priority. When the electricity goes out, a gas stove and oven will still continue to work.

A natural gas oven will run on reserves for perhaps as long as 3 to 6 months in many areas. But ultimately, if no one is at the compressor pump plant keeping everything in working order, the flow of natural gas will end.

Natural gas service is not always offered in out of town rural areas. If this is the case where you live, (or you want a backup for your backup) a gas range unit can still be installed.

Purchasing a propane gas tank (or tanks) will allow you to hook up a gas range in your kitchen no matter where you live.

We can cook for more than a year using just one large propane tank on our survival homestead. A set up of his type will provide a way to cook indoors so no one – no matter how close they live, will be able to see, hear, or smell that you are cooking.

Unless you live outside of a rural area (the only place preppers should live anyway) you can buy as many propane tanks as you would like to keep a gas oven going for potentially many years.

Purchasing a solar generator (or several) will also allow you to cook indoors. Even if your space and budget allow for only a small generator, you will still garner enough power to use conventional food preparation devices indoors or on your back porch.

Unlike a gasoline, diesel, or kerosene-powered generators, a solar powered generator runs silently, and does not need a stockpile of fuel in order to operate. But, just as with the solar oven noted above, the cooking powered generated from this type of generator will be reduced during cold weather months.

A solar generator can typically have enough juice to power a crockpot, hot plate, toaster oven, roaster oven, air fryer, and even a small wattage microwave.

One of the very best ways to prepare hot food to eat without sacrificing sight, sound, or smell discipline. You can buy freeze dried meals from survival supply vendors that require only hot water be poured into the pouch to complete the process.

The heating of the water can be done using a camping style solar shower bag, solar oven, a small rocket stove that emits little smoke, or simply by placing a glass jar of water in a sunny spot, and allowing it to heat up naturally.

Long-term storage packet meals like this are more expensive than using food your have grown or raised yourself and preserved, but the SHTF cooking OPSEC value they provide is priceless.

Investing a freeze drying machine can cost between $1,500 to $4,000 depending on size and model. While this is a substantial expense, it could be a money saver in the end if you put in a large garden, as well as hunt and fish for a lot of your own food now, before the world goes pear-shaped.

Not only will owning any one of these wood powered features in your home allow you to cook, they would also allow you to keep the living area warm, as well.

Once again, rural preppers will have a distinct advantage over preppers living in other areas when it comes to fireplace, wood burning stove, or wood cook stove cooking.

Preppers who cannot resupply their own firewood will only be able to use these options until the stockpile they have paid for and had delivered, run out. Hiding a big pile of wood from view is also going to be a major hurdle.

During cold weather months, smoke coming from any wood powered source will not look out of place in a rural area. But, in the summer, late spring, or early fall, a smoke flume coming out of a chimney will quickly alert a passerby that you have food, and are in the midst of preparing it.

Any time you can cook indoors the smell of what you’re doing is hidden. All of these wood powered devices operate not silently, but extremely quietly.

Learn how to make a DIY wood burning stove here.

Outdoor cooking should be avoided at all costs. Unless you are in a bugout situation and have to build a fire for warmth or water purification, using a conventional campfire should always be a last resort.

Drawing attention to yourself, what you have, and what you are doing is the exact opposite of what a prepper rightly concerned about OPSEC would ever want to do.

A Dakota fire hole or Dakota fire pit is designed to produce heat using just the bare minimum of both flames and smoke. An outdoor fire like this will fairly quickly generate enough heat to boil water or cook food.

The amount of space needed to both dig and use a Dakota fire hole is incredibly minimal – making them a viable SHTF cooking option for small town, suburban, and even urban preppers.

The sight and smell discipline offered by using a Dakota fire pit is not as perfect as using a gas range, solar oven, or solar generator, but is still a potentially viable option if the Dakota fire hole can be dug in a location that no one outside of the family will see.

When using a Dakota fire hole, or forced to build a traditional campfire in an emergency situation, using aluminum foil or cooking bags will reduce the cooking smell tremendously.

Packing cooking bags or foil in your bugout bag will reduce, at least slightly, the smell of food being prepared if you use a traditional campfire or a Dakota fire pit when away from home, as well.

Wrapping food in multiple layers of foil before putting it on a cooking grate or in a cast iron pot to prepare it, or in a cooking bag, will not alter cooking times and in fact can make the meal being prepared even more tender.

A small portable propane powered camping stove or camping oven offers you the chance to make any food you would on a conventional kitchen range without making any noise or emitting any smoke.

But, the smell of bacon cooking on a camp stove, or biscuits baking in a camp oven can draw unwanted and potentially dangerous attention. Using a propane-powered cooking device indoors is not safe – as the label on camping stoves and ovens clearly state.

But, using such an off grid food preparation device on a porch close to your house door or inside of a garage with a window or exterior door cracked may allow for the recommended proper ventilation, and vastly reduce the smell of the cooking food beyond the immediate area.

Check out our reviews of these popular camping stoves:

Thermal cookers do require an external heat source like a small portable rocket stove designed to hold a small pot to boil water or a Dakota fire pit. These food preparation devices are basically large thermoses that can accommodate small to medium cook pots inside.

It takes around 10 minutes for water or other liquids placed inside of the pot to hit the boiling point. Once the water has boiled, the other ingredients that are stirred into the pot will cook for up to eight hours – without making any noise or drawing any attention to the meal preparation via smell.

There are pros and cons to every SHTF cooking option on this list. While all can work efficiently in an off grid manner, some rely on the resupply of a fuel source and others cause some type of smell, sound, or smell discipline issues.

Using more than one OPSEC minded off grid cooking options so you not only have backup for your backup but a third layer of sight, sound, and smell discipline cooking options will help keep your family well fed and safe during a long-term disaster.

Preventing anyone other than the loved ones living in the same home from knowing you have food and a cooking source to make it is the only way to keep both them and your food stockpile safe.

We will not spam you.
Print
326
Shares

2 thoughts on “9 SHTF Cooking Methods That Are Stealth”