Most every prepper in existence has at least one – if not a dozen –  ways to cook in the absence of electricity.  Whether on the go or sheltering in place, cooking and boiling water are right up there on the “list of important things” that must be done.

There have been a multitude of cook systems developed over the years to accomplish just that. Some use canned or bottled fuel, others use fuel tablets – and others are considered “biomass” systems. Biomass refers to most any natural burnable item such as sticks, small dry leaves, twigs, pinecones, etc.

The Kelly Kettle has been around since the late 1890’s cooking food AND boiling water  at the same time.

What makes the Kelly Kettle so unique is its design. First and foremost it is a wood stove. A Fire Base sits at the bottom with vent holes in it. Small twigs, sticks and anything else flammable can act as the fuel source. Although the fire is started within the Fire Base additional material is placed within the kettle after it is placed on the base. The fire burns extremely hot via the oxygen rich air being fed through the vent holes in the base. This is the typically “volcano”stove method for getting a very hot cooking medium.

Consider the efficiency in both fuel and time. The same fuel can both cook a pot of beef stew while purifying water – all at the same time. What a great idea!

The Kelly Kettle Trekker consists of two main parts – the Fire Base and the Chimney. Additional supplies also come in the box including a pot support, a small cook set, and a can of Fired Up! Emergency Fuel. I have not tested the Fired Up! yet.

While my youngest son Christopher gathered up a pile of small twigs and sticks in preparation for the initial test I gathered everything to get started. [See below] 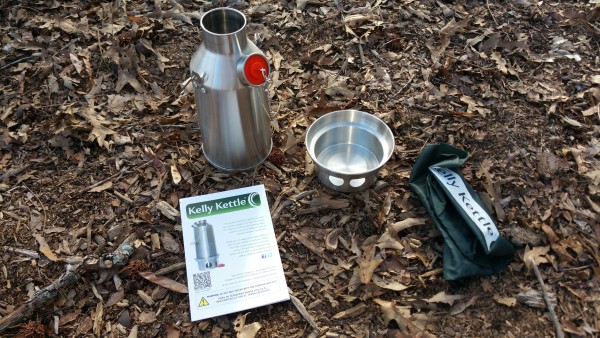 I explained to Christopher how the stove worked and the steps to get it started. He placed some dryer lint and a few small twigs in the Fire Base. Rather matches or a Bic lighter I gave him a ferrocerium rod and striker. [See below] 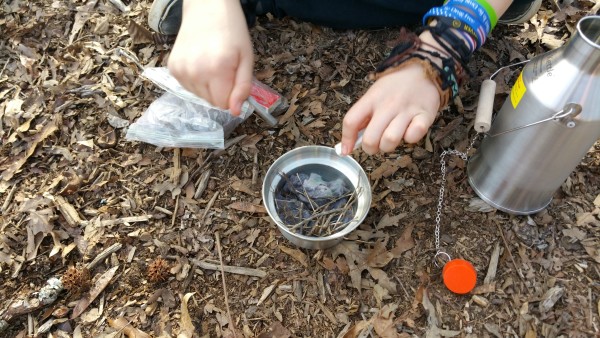 It took some working on his technique but he finally was able to send some sparks onto the tinder. 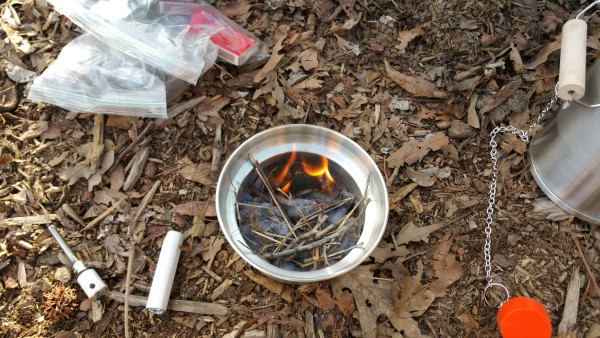 The water chamber was filled. The cap to the chamber must be left off while heating the water. [See below] 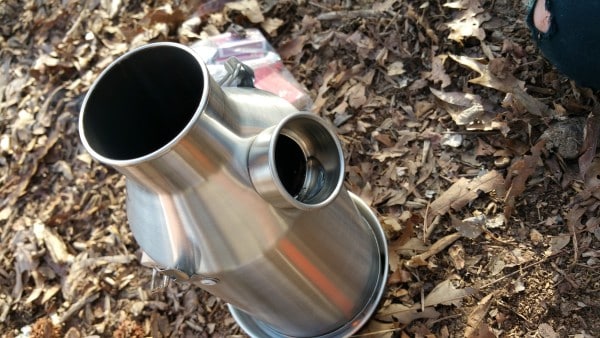 Once the fire in the Fire Base was well underway the main chamber was installed. It is important to note that the stove is somewhat top heavy thus having a flat and solid base which to place the Trekker is important.

Small twigs and sticks continued to be dropped into the chimney to fuel the fire. As the flame became larger we threw in larger sticks which burned well. [See below] 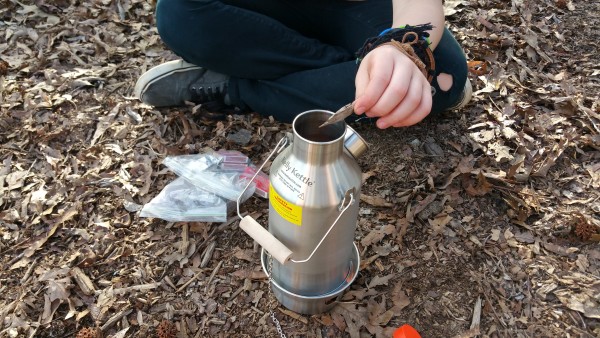 Within just a few minutes there was flame shooting out the top of the Kelly Kettle. This was some serious heat. We continued to drop twigs, sticks, and even a few dried leaves into the chimney. [See below] 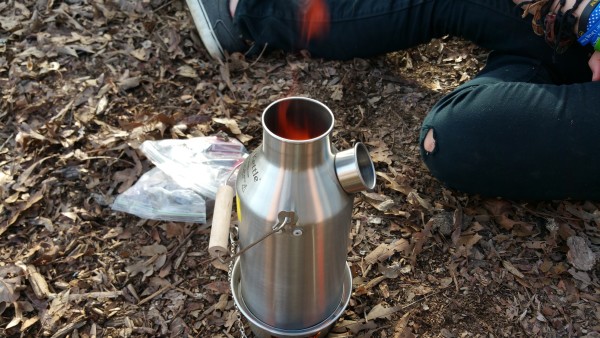 The water inside the chamber started boiling and spilling out a little. This would be perfect for preparing some Mountain House freeze dried food. If water is questionable for drinking it could be purified via boiling and then drank once cooled. [See below]

Christopher decided he wanted to cook a hot dog using the included cook set and pot support. The pot support raises the pot up away from the chimney to allow heat out as well as space to continue to feed the fire. [See below] 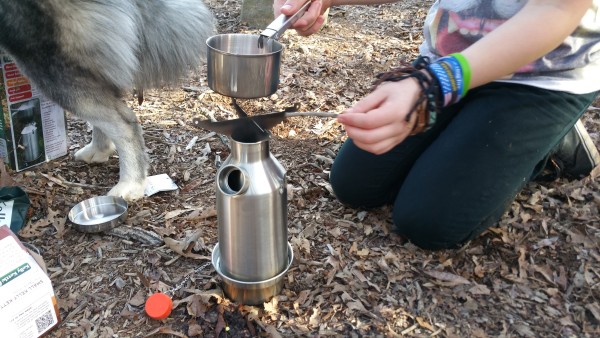 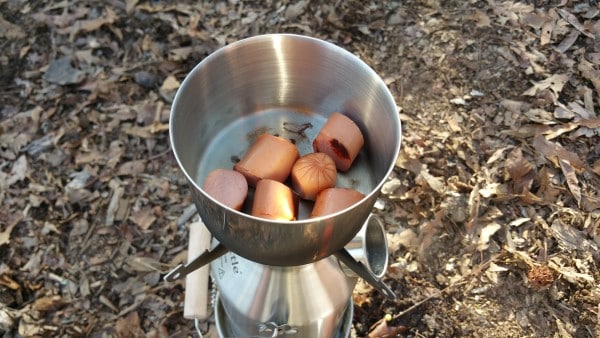 There is a saying – “Build a better mousetrap, and the world will beat a path to your door.” In the world of portable survival cook systems the Kelly Kettle Trekker is that mousetrap. It is truly an ingenious design which from this point forward I will compare all others.

It is simple to operate. There is no need to carry fuel. It is not the smallest or lightest however it is not huge nor heavy. It can fit in most any backpack or survival kit. It cooks your food and boils your water – simultaneously.

It is well worth the price of $74.99. High recommendation.