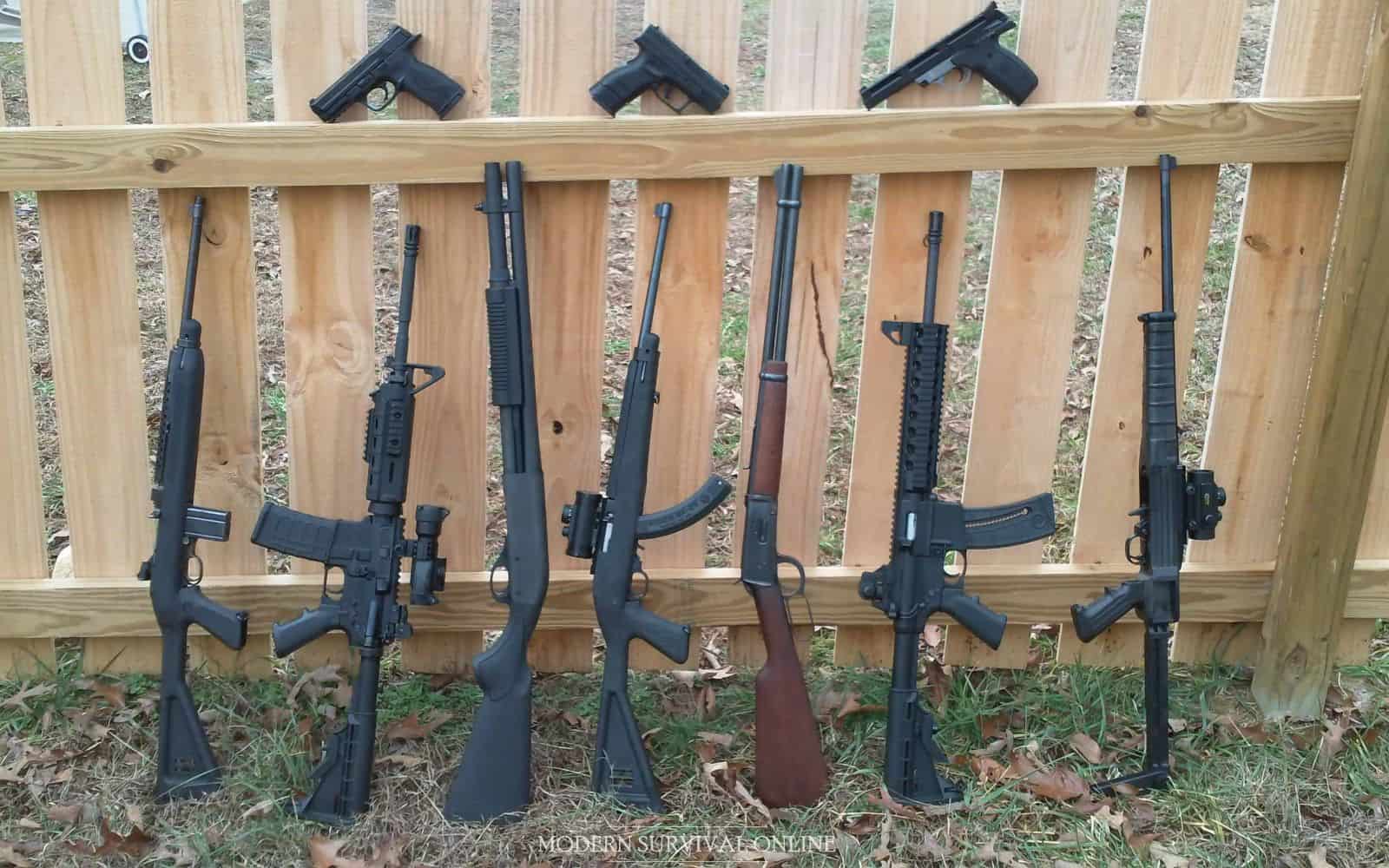 How many guns do you really need to own?  This is a question that many gun owners ask themselves or ask others. Unfortunately, it’s a question that has no definitive general answer. Let’s analyze it in greater depth and see if we can find the right answer for you.

There are respectable arguments to own as many guns as you can. Guns are like tools in a toolbox, in that each tool and each fulfills a different role, so with more guns, you cover practically all of your bases you can think of.

Owning more guns could also mean you’ll be owning more calibers, meaning you’re not limited in what you can pick up and use during an SHTF or ammo shortage situation.

You also have backups in the event that you lose a gun or if any are damaged. And since you can always sell guns for higher prices later (depending on the model), you could be making a valuable investment.

On the other hand, there are solid arguments against owning multiple guns. Many would argue that it’s more important to pick only a handful of guns and train with them extensively, spending the money that you would have otherwise spent on more guns for ammunition instead.

If you own a variety of guns in different calibers, you’ll have to stockpile far more ammo, and you’ll only end up having less ammo per caliber.

Furthermore, if you have more guns, you won’t get as much training time in with each one and you’ll ultimately be less of an expert with your particular weapons of choice.

Regardless of which side you’re on, here’s something that most of us should agree on: simply owning more guns does not make you more armed.

The old saying goes that you should beware of the one gun man, because he more than likely knows how to use it.

In other words, you can be adequately armed with only two or three guns in your arsenal versus twenty or thirty, or even two hundred or three hundred (and really, you only need that many guns if you’re a collector or plan on outfitting your own personal army).

So how many guns do you really need?  Here’s the answer: it varies by the individual. For someone who likes to collect different historical firearms, that person will never be able to own enough.

But, on the flip side of things, for someone who doesn’t necessarily likes guns but sees the value in owning one maybe for home defense and family protection, only one would suffice.

That being said, there is at least one fact that we should all be able to agree upon: being trained in how to use your gun in a true life-or-death situation and having a healthy supply of ammunition is more important than actually owning more firearms, at least for those who plan on using their weapons for defensive use.

Let’s discuss this next and then cover the basic types of guns that you will need to cover your bases.

What do you think is better: to own one gun with plenty of ammo and be expertly trained in the use of that gun, or to own two guns but have limited ammo and training for both? Obviously the first option is more desirable.

Training and practice is something that is hugely overlooked, and that’s unfortunate. The vast majority of people who purchase firearms over the counter are not experts in using guns.

They’re ordinary people who what to use them for self-defense, hunting or target shooting. Subsequently, they buy that gun and a couple of boxes of ammo, run a magazine or two through at the shooting range, call themselves good and never touch that gun again.

Big mistake. Owning a firearm is a huge responsibility, and firing a few rounds through your weapon at the shooting range will not make you any more effective with it in a true life-or-death situation. So really, you haven’t made yourself or your loved ones more protected.

Firearms training requires dedication and repetition.  You want basic actions you conduct with firearms to become drilled into you as muscle memory.

Let’s say that your pistol has a malfunction while you’re shooting it. Would you be able to clear that malfunction in less than a second, or would you instead look at the gun in bafflement and try to figure out what’s wrong?

Doing the second of those would get you killed in a gunfight, but clearing the gun and getting back in the fight will increase your chances of survival. You need to conduct drills where you master how to conduct different actions.

In order for something to become muscle memory, you will need to complete at least one thousand repetitions of it. This means that for clearing a malfunction, you need to simulate that malfunction and then clear the weapon one thousand times.

It requires time and consistency, but the reward is that by the end you’ll be able to complete these actions without thinking.

The same goes for actions such as holstering and re-holstering your weapon, reloading, flicking off the safety (if applicable), the grip and firing stance you personally use, shooting while moving, transitioning between weapons, and so on. Your life could depend on it.

Having enough ammunition is also hugely important, because without it, your gun is nothing more than a club.

How much you need is another big question in the firearms world with no consensus for an answer.  In general, though, you should be safe with at least one thousand rounds of ammunition stored away per caliber.

That may sound like a lot, and it’s certainly not cheap.  However, one way you can accumulate this much ammo over time is to make it a habit to buy just one to two boxes of ammo a week.  Slowly but steadily, your stockpile will begin to grow.

In just two and a half months, you’ll have one thousand rounds of ammo stored away for that particular caliber.

What Guns Do You Need?

Earlier we talked about how owning guns is like owning tools, in that each gun fulfills a different role. Therefore, it makes sense to at least buy the guns you need to cover each of the different roles you will need a gun for.

There are 6 types of guns that you will need to buy if you want to have each and every one of those bases covered, and those five are: .22 rifle, shotgun, defensive rifle, hunting rifle, concealed carry pistol, and duty pistol.

Why these six?  Let’s talk about each one in order:

.22 Rifle: Every gun collection needs at least one .22 rifle, no matter how small.  A .22 is perfect for plinking, small game hunting, and for teaching children or newbies how to shoot thanks to its low noise and recoil.

Shotgun: The shotgun, specifically a 20 gauge or 12 gauge, is perhaps the most versatile firearm there is.  Load it with birdshot for bird hunting or target shooting, buckshot for home defense, and slugs for hunting big game if you want to.

Defensive Rifle: Your defensive rifle needs to be chambered in an intermediate round such as 5.56x45mm or 7.62x39mm, and should ideally be a semi-automatic with a large magazine capacity simply since you’ll have a higher rate of fire with less reloading to do.

That being said, a lever action chambered in a round like .30-30 could suffice for this role as well (should you already have a lever action in your possession).

Hunting Rifle: Your hunting rifle needs to be chambered in a larger caliber than your defensive rifle because it needs to deliver greater knockdown power at longer distances.

Concealed Carry Pistol: Your concealed carry pistol is your ‘always gun’, or the gun that you always keep concealed on your person.

As such, it needs to be comfortable for you to keep hidden on your body while also being reliable in a self-defense situation.  .32 ACP, .380 ACP, .38 Special, and 9mm Luger are popular caliber choices for a concealed carry gun.

Duty Pistol: Your duty pistol needs to be larger than your concealed carry pistol with a higher magazine capacity and chambered in a respectable caliber such as 9mm, .40 S&W, and .45 ACP.

Some people like to merge their concealed carry and duty pistol into one (for example, the Glock 19 holds 15 rounds of 9mm and yet is compact enough to conceal for most individuals, fulfilling both purposes).

The number of guns that a person needs differs by the individual based on their priorities.

Hopefully, this article helped guide you to what your priorities need to be, and helped you realize that owning more guns isn’t always the right path to take.

11 thoughts on “How Many Firearms Do You Really Need?”