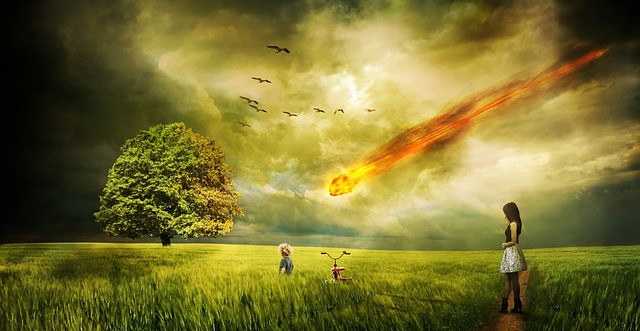 “TEOTWAWKI” means The End Of The World As We Know It. Wow, that sounds pretty bad, right? The truth is not many of us can truly have a real idea of what TEOTWAWKI will actually be like until it’s happening. Your grandparents or great grandparents might have a small inkling if they lived through any part of the Great Depression.

You already know that something is different about the world today than it was ten or even five years ago. The state of the world is getting worse, not better. It’s happening fast and it’s happening all around us. And a lot of people are blind to it or are in denial about what’s coming.

Now here’s the even scarier news. Being prepared doesn’t guarantee you and your family won’t struggle during a TEOTWAWKI event. It does give you a much bigger fighting chance than those who don’t prepare. Keep in mind that just moving from the city to a rural area won’t save you. Stockpiling three years of food and water won’t make survival a sure thing either. There are actions you can take to increase your odds of survival but there is no guarantee.

The reason they call it TEOTWAWKI is not because all humans will be wiped from the earth. Although that’s possible with some events, it’s not likely. But a TEOTWAWKI event will change the way we live our daily life, not just for a couple of weeks or months, but long term and possibly FOREVER. Life as we know it, and as our children or grandchildren know it right now, may NEVER AGAIN be the same.

Okay, so TEOTWAWKI events are going to be bad. What kind of events are we talking about here?

Civil unrest and disobedience is typically more a gradual change but can still change life as we know it. Europe has already experienced this due to the recent influx of migrants and refugees. For Europeans, life has already changed drastically. The Schengen Agreement, made by a group of more than 20 countries in Europe that had basically done away with strict controls and passports at their borders, has been broken. Trust and cooperation is gone.

Europe is experiencing widespread anger and violence. There are protests and even rioting across the continent. In October of last year, in response to the waves of migrants arriving in Finland, the Soldiers of Odin were founded. Their stated goal is to improve security and provide protection from the criminal element of the immigrants but the founder of this group has connections to Neo-Nazism and their tactics have ignited concerns of vigilantism.

Violent attacks are occurring with alarming frequency in Calais, France. Migrants have for years camped temporarily while waiting to cross the English Channel to a better life in the UK. The huge numbers of migrants from war torn countries such as Syria, Sudan, and Afghanistan in the last year are causing increasing problems. The population living in semi-permanent camps exposed to the elements, has become known as the Calais Jungles, and ranges from 3,000-7,000 migrants, including women and children.

Asylum seekers are desperately trying to force their way through the tunnel and have caused increasing chaos, anger, and violence from migrants, right wing groups, and French authorities. Migrants are arming themselves and a group of migrants attacked a school bus full of British children returning home from a trip back in January. No injuries were reported as a result of the attack but the bus was damaged and the children traumatized by the attack.

This is quite likely the TEOWAWKI for many Europeans.

Large scale natural disasters cannot be prevented. Due to technology, we can sometimes get a little advanced warning from the news reports. Hurricane Sandy raged from October 25th to November 2, 2012 and affected several countries and nearly half the states in the U.S. from Florida to Maine. Effects were felt as far west as Michigan and Wisconsin. For people in those areas, life was altered drastically for an extended period of time. TEOTWAWKI will be much worse and will affect pretty much everyone.

Many of you will remember, Hurricane Katrina, August 23 to 31st of 2005. Katrina was a category 5 hurricane but thankfully had downgraded to category 3 when it hit New Orleans. Over 100,000 people were displaced and over 1,400 people died. To date it’s the deadliest hurricane in the U.S. since 1928. New Orleans is still struggling to rebuild ten years later. It was a TEOTWAWKI event for many New Orleans residents but not for the rest of us.

An EMP event would produce large scale disruption and even permanent damage to any kind of electronics in a wide ranging area. Entire transportation and communication systems would likely be wiped out. Imagine what that would be like? If half the country or even several states had no vehicles, no electronics, no way to communicate with anyone, no way to travel except on foot, skateboards, or maybe bicycles.

130 people died in the recent attack in Paris. According to The National Consortium for the Study of Terrorism and Responses to Terrorism (START), from 1978 to 2013, there were on average, less than 5 attacks per year that killed over 100 civilians. That number as reported for 2014 is an average of 26 attacks annually with more than 100 civilian deaths.

In 2015, there was at least one attack resulting in over 100 CIVILIAN deaths EVERY single month from January to November! The majority of these large scale attacks have taken place in the Middle East and Africa. But the U.S. has documented at least fifteen smaller terrorist type attacks just since 2013. That’s more than the U.S. experienced in the entire decade from 2000-2010!

The Ebola Pandemic. Did you know that it actually began in December of 2013 in Meliandou, Gueckedou Prefecture, Guinea? It didn’t become widespread news until it hit the U.S. just over a full year later. A TEOTWAWKI event may not happen instantly or within a matter of weeks or even months, it could build gradually over a period of years. Had officials not been able to contain the Ebola Pandemic as they did, there wouldn’t have been much that could be done. The disease had an entire year to travel all over the world before officials took it seriously.

Economic Collapse (similar to what happened in WWII)

A TEOTWAWKI event means things will be worse than most of us have ever experienced. Stores will start off letting people shop only a few at a time because the power is out. Purchases will be limited. Lines will be long. Within days, stores will be completely out of certain items. Trucks won’t be able to make deliveries because gas pumps aren’t working. Eventually the stores will shut down indefinitely. Paper currency and even gold and silver may be worthless. The banking and economy system as we know it will collapse.

What Are the Common Elements of a TEOTWAWKI Event?

So How Can You Increase Your Odds of Surviving TEOTWAWKI?

The best way to survive a TEOTWAWKI event is to alter the way you and your family live.

Before a TEOTWAWKI event hits.

Read about and consider strategic relocation as explained in Joel Skousen’s book, Strategic Relocation: North American Guide to Safe Places. If you’re going to strategically relocate, you need to do it before a TEOTWAWKI event hits.

Strategic relocation isn’t simple and it usually isn’t cheap either. Not everyone will be able to just pick up and move. So let’s say it’s just not feasible for you and your family to relocate at any point in the near future.

NWAWKI (New World As We Know It)

If you manage to survive TEOTWAWKI, you have to be ready to survive in the new reality, in the new world as we know it (NWAWKI). It will be an entirely new world. Society and its people will be forever changed. And there’s really no way to predict precisely what this new world will look like. It’s likely the world would rebuild, but how long would it take to restore a collapsed economy or rebuild the health and stamina of a world population devastated by disease?

Think about how we live today. Honestly assess how you or your children react when you are forced to be without power for just a couple of hours or a day. If chaos, boredom and crankiness rears its head in your house when the power goes out for just a brief period of time, imagine what it would be like long term.

Whether you strategically relocate, bug in, or bug out, to survive TEOTWAWKI, you need four basic things as part of your long term survival plan:

So, even though there is no guarantee of surviving TEOTWAWKI for any prepper, no matter how prepared, you can make sure that you and your family have the best opportunity for survival. Learn as much as you can about those common elements you can expect during and immediately after a TEOTWAWKI event and plan to overcome those. But to give yourself the best chance, you need to also master the skills needed to survive in the NWAWKI, no matter what it may look like.

6 thoughts on “What is TEOTWAWKI and How to Survive it”