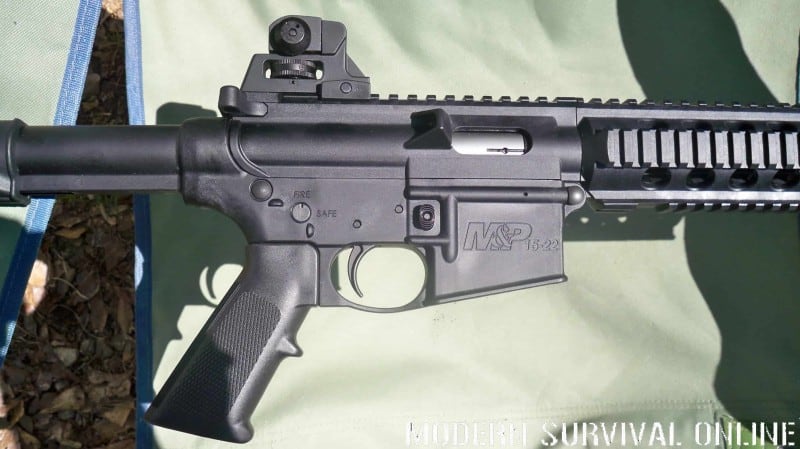 Over the years I have had a variety of .22LR pistols and rifles. From the Ruger Mk II pistol to a Squire Bingham M16R.

I have shot thousands of rounds of .22LR and had a ball doing it. Ever since seeing pictures of the Smith & Wesson M&P15-22 – I have wanted one.

Well – I finally broke down and bought one. Although I know that the $469 price tag could have bought me larger caliber – more serious defensive-minded firearm – the M&P .22LR was a “want” buy – not a “need”.

Here are some specs from the Smith & Wesson website:

I picked up my M&P new from Palmetto State Armory. Bringing it home I was excited to open the box and check it out.

My initial impression was one of quality. This gun feels solid and well built. In comparison – it is certainly lighter than my Stag AR.

One of the main reasons for this is its polymer construction. The vast majority of the M&P is polymer – including most of the lower as well as the quad rail.

I wanted to check out the internals – which was easy. Breaking down very similar to a regular AR-variant – access to the bolt assembly is super easy. In other words – field striping for cleaning  is simple and requires no special tools.

The barrel can be cleaned easily when broken down as both ends are accessible.

Many accessories that can fit on a typical AR can often be fitted for the M&P. I plan to leave mine pretty much stock other than adding a red dot sight.

The buffer tube cannot be removed – although other stocks can be fitted onto the non-removable buffer tube (so I am told). Even after market triggers can be dropped into the M&P15-22.

The barrel is fitted with a standard looking “flash hider/muzzle break”. I like it.  Even though it is just a .22LR – it adds to the AR-look and profile.

Sights consist of a fully adjustable rear and a A2-style front post. When I first checked out mine the rear sight was adjusted for windage way to one side.

I thought that this could not be right – so I set it centered in the mount. I soon found out at the range that it came from the factory correct after I was shooting WAY to the left.

Anyways, I had no issues with the sights and have no desire to change them – other than trying out a red dot sight or two. I like the looks of the Vortex Strikefire red dot. More on my testing in a bit.

I took the M&P to Georgia to my brothers land to test out. I had purchased a few extra magazines as well as an ample supply of .22LR ammunition.

I decided to test the M&P15-22 with CCI Blazer, CCI Mini-Mag HP’s, and CCI Tactical ammo.

Here were the results:

I consider this reliability test fantastic. 600 shots and only 1 failure – and that one failure within the first 200 rounds using cheap ammo – excellent!

Accuracy was just fine and what was to be expected. I did not do a bunch of group tests to show you per ammo type – I just wanted to see if I could hit what I was aiming at.

To provide one example – my nephew was shooting an old 12 gauge and I hung up 2 empty shells from a distance of about 30 yards. I was using the M&P and he was using an old target .22 that belongs to his dad.

I hit my shell the very first shot. He was impressed – especially after missing his over and over again and then I hit his within a few additional shots.

I had no problems with the magazines or function of the gun whatsoever. Magazines were easy to load, easy to remove and easy to insert. No issues.

One of the advantages of the M&P15-22 over other .22’s is the ability to get used to an AR-type system for a lower cost.

Practicing at the range – engaging and disengaging the safety many times over while shooting inexpensive .22LR has its benefits.

The quad rails provide plenty of area to mount lasers, grips, flashlights…..whatever. I like it – but they are not the most comfortable thing to hold while shooting.

Oh – for all you lefties out there (like me) – I had no issues shooting the right-hand ejecting M&P15-22.

My overall impression of the firearm has been very positive. I am really looking forward to my next trip to Georgia to shoot it again.

This past weekend I headed over to a friends house for a cookout with several weapons including the M&P. Lucky guy has a 50 and 100 yard range on his property.

I fired another 150 rounds of CCI Mini-Mags with no problems. Most of my shooting was at 50 yards – however I did venture out to 100 yards for two groups.

The first group fired I was not even sure if I would be on target. Turned out I was – and did pretty well. My group was low but ran to 8″. I was happy.

I decided to shoot another and pay a little closer attention to my breathing  and steadiness. Shooting from a bench – but not a rest – I managed a respectable 6″ inch group.

For me and my skill level – a 6″ group at 100 yards with a semi-automatic open-sighted .22LR rifle is pretty good.

Looking forward to next time.

We will not spam you.
Print
9
Shares