The use of chlorine to disinfect water as well as to maintain hygiene in various ways is well-known. For consumers, there are primarily two common types of active chlorine that are used for cleaning purposes: sodium hypochlorite and calcium hypochlorite.

Sodium hypochlorite, commonly known as bleach, is typically used for laundry, cleaning materials like commercial food utensils, and more. Calcium hypochlorite, on the other hand, is popularly known as bleaching powder, and is typically used in disinfecting and deodorizing various things, even cleaning pools. Hydrogen peroxide is also another formulation of bleach, though it does not include chlorine.

All three types of bleach have their uses when SHTF, so it’s a good idea to keep one or more types around for emergency situations; however there’s a caveat I’ll tell you about in just a minute.

Chemically, bleach works by oxidation, which simply means that it releases oxygen atoms that then break up contaminants. That means it’s good for a wide variety of uses, like purifying water, killing harmful bacteria on objects, and more. Not only that, but a jug of bleach is extremely cheap, so it’s an easy chemical to stockpile, at least in the short term.

Unfortunately, bleach and bleaching powder have a shelf life of only about 6 months, because the sodium hypochlorite eventually breaks down into salt and water. If stored in the right conditions (preferably at room temperature), regular household bleach could last up to 9 months, even though it won’t have the same power stated on the label.

So, if you want to maintain a stockpile of liquid bleach, keep in mind that you’ll likely need to rotate it out ideally every 6 months, which shouldn’t be that hard if you use it regularly to clean up your house.

Calcium hypochlorite (powdered bleach), on the other hand, is a little more shelf stable than liquid bleach, so it can last up to 24 months. However, it’s very important that this type of bleach is stored in the proper container – definitely not metal, because it will eat through it and could potentially react with the metal. Glass or plastic is generally fine, but you also want to make sure it’s stored in a cool (50F – 70F / 10C – 21C), dry place far away from any other chemicals it could react with.

Because bleach is such a robust chemical, you only need a little bit of it for most common tasks. The most commonly used dilution ratio is 10:1, meaning one part of bleach for 10 parts of water.

Depending on what you’re using the bleach for, you may need to use more or less of to achieve the effect you want. For example, if you use it for laundry and need to wash out any clothes stained by blood or other protein-based stains, then you’ll typically need to use more bleach (though you probably don’t want to use too much because over time, bleach weakens the fibers of the fabric it is used on). For purifying water or cleaning, however, you’d use significantly less bleach.

Never mix bleach with chemicals like ammonia, vinegar, and rubbing alcohol. If you do, you will be exposed to very toxic gases.

Though bleach is commonly used for lightening hair (hydrogen peroxide), it is not safe to be touched for very long. The longer your skin remains in contact with bleach, the more likely it is that you will get a chemical burn, which is signaled by the affected area feeling itchy. The long-term effects of skin contact with bleach include skin lightening and permanent damage.

Though bleach can be used to purify water, you should be aware that it is a carcinogen and having too much of in your water can have negative effects on your health. In a long-term SHTF scenario, you should try to rely on other filtration and purification systems to get drinking water (Sawyer Mini personal water filter, the Big Berkey water filter etc.) In the short term, however, bleach is an excellent option if you have to drink water from the wilderness, for instance.

Bleach also gives off harmful chemical odors even if you don’t mix it with something dangerous, so if handling large quantities, do it in well-ventilated areas and use gloves and a mask. This may not always be possible in a SHTF situation, but if you have the ability to take the proper precautions, you should.

There are a number of ways that water can be contaminated. Water becomes non-potable by organic impurities and chemical substances. While filtration is an effective way to remove debris, it does not remove every contaminant from the water, so most people also purify their water on top of filtering it.

Water contaminated by organic matter can be effectively made potable with the use of bleach. In order to do this, you should use chlorine-based bleach, as the chlorine is what neutralizes organic materials in bleach. The chlorine oxidizes the organic matter, which kills any harmful organisms that may be living in the water.

Use 8 drops of bleach for every gallon of water to kill harmful organisms. Make sure you use proper amounts to avoid over-consumption of bleach.

When you purify water with liquid bleach, you definitely want to make sure that you’re using unscented bleach. Many common bleaches that you can buy from the store for laundry purposes are scented; however, most major brands also offer an unscented version (including the popular brand Clorox).

Overall, using bleach is a very convenient way for removing or dealing with organic water contaminants. You don’t have to use liquid bleach to do it; you can use powdered bleach which, we already said it has a longer shelf life. Another great alternative comes in the form of aquatabs (made of Sodium Dichloroisocyanurate – different from chlorine), which you can find without much hassle online.

As with storing the tablets anywhere else, though, you’ll want to be sure that they are properly stored in the bag as well. In general, store them in a plastic or glass container, and make sure that this container is not under pressure, heated, or anywhere near other chemicals that the bleach could react with.

Alongside purifying water, bleach can also be used to sanitize objects. For sanitizing severely contaminated surfaces, mixing a cup and a half of bleach with a gallon of water and allowing the bleach to sit on the surface for three minutes will sanitize it. For small objects like utensils and other things, however, you should use a quarter cup of bleach to a gallon of water.

Especially if you’re using it to sanitize cooking utensils and other objects that come into contact with food, you will always want to make sure that you’re using the right amount.

Summing It All Up

Liquid bleach and bleach crystals/powder are easily one of the most cost effective methods to having clean potable water in an emergency, but they do come with downsides. Bleach can be a harmful chemical if improperly mixed, ingested in great amounts, or allowed to remain in contact with skin. Another issue is the 6 to 12 month shelf life. However, it is also cheap, and easy to rotate because you can use it around the house.

Not only that, but because it comes in so many forms, you can store more than one kind of beach in order to properly prepare for any situation. Pellets and tablets, for example, can be easily carried around in your bug out bag, while powdered bleach can be stored in larger amounts at home and at your bug out location. Or, you can just buy good old-fashioned unscented laundry bleach and store those containers until the shelf life is up.

Because of its many and varied uses, bleach can be found in just about any household. As a simple and cheap solution to cleaning, disinfecting, and sanitizing, there are few comparable products that you can get as much use out of. So long as you properly store and handle your bleach, it can aid in a number of situations, especially when SHTF. 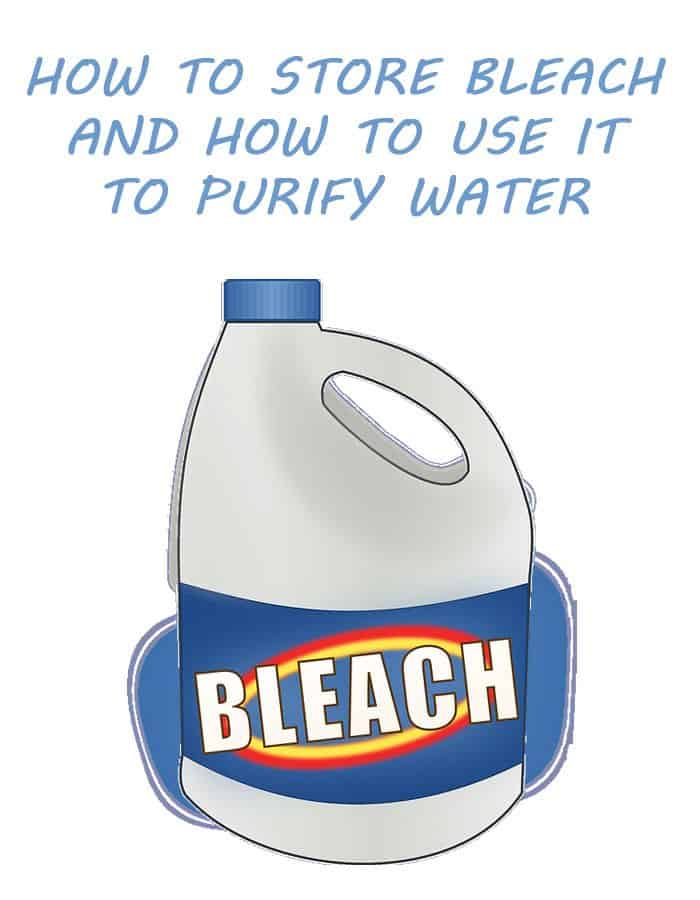 We will not spam you.
Print
153
Shares