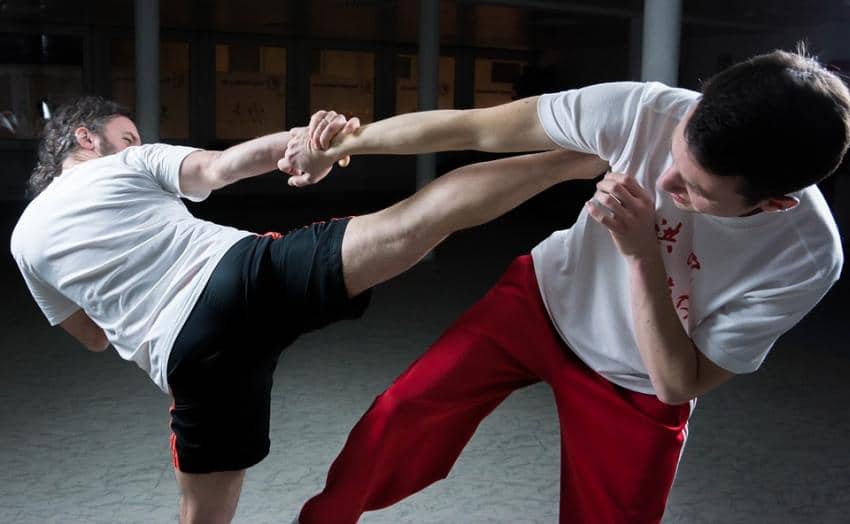 I’ll be the first to admit that this article is not going to be conventional by any means. It is aimed to firstly, make you aware of some pretty out there self-defense moves and then secondly, describe where and when you might use them and their intended effect.

Think not just about a robbery or mugging scenario, but also of some pretty hairy survival situations where you may be faced with man or beast and not have much in the way of weapons to defend yourself with. This is where your imagination and flight or fight instincts will kick in. Therefore having some pre-considered ideas and techniques is surely better than having none; well that’s my opinion anyway and I’m sticking you it. So in preparation for dealing with some crazy woodsman or hungry animal sizing you up for its next meal, I encourage you to continue reading.

I’m sure you know what it means when a guy says “oh wow that is a kick in the pants” Well, that is because for any male out there, a foot or knee aimed straight between the legs is going to hurt a heck of a lot more than anything else. Heck, I think many of us would rather get shot or stabbed than kicked in the groin. Well, this doesn’t only go for humans, but for other animals too.

Now, it might sound kind of farfetched to be able to land that big kick on a grizzly bear’s private area, but I guarantee that if you manage to hit the goal, the bear will run away. Men are strong, but parts of them are extremely fragile and nothing shows that more than a good kick in the pants.

Whether you’re confronted with an angry moose, a bear, or anything else, when all else fails, it is definitely worth a try. If someone has you tied up in their remote cabin and is looking to eat your brain like our best friend Hannibal Lector, a kick in the pants will definitely get his attention too. If there is a man involved, or male animal of any kind, a good kick in the groin is a self-defense move to have in your arsenal.

Forgive me for being a little crude here, but in all fairness, the whole point of this article is to keep you alive, so you’ll need to be able to do anything and everything possible to make sure you stay that way. So when I say ‘the stab’, yes I mean, get a sharp, pointy object and stab the closest bad guy or animal that is a threat to you or your family.

Heck, if you are out in the woods, there are a million things you can pick up along the way to jab into someone’s or something’s face, eyes, nose, ears, or any other sensitive area. Pick up a stick, a fishing hook, your keys, sharpen your fishing pole. Do whatever you have to do to get yourself out of there and to safety. Now, I don’t condone violence in any way (honestly), but if it comes down to you or crazy old grizzly man Jones, you need to do whatever you can to stay alive. Nothing works better than a sharp, pointy stick.

Now, this self defense technique is intended more to be used against animals than on people, but it will work for pretty much anything out there. It is fairly common knowledge that animals have sensitive noses, much more than us humans. They can smell much better, but they also feel much more pain when the nose is hit or injured. Therefore, a great self defense technique is to use those big hiking boots of yours and aim straight for their nose.

It might not be easy to connect with, but keep trying because your life might depend on it. Whether a bear, fox, wolf, wolverine, or anything else like that is bearing down on you, a good kick to the nose is really going to hurt and give you time to flee. It will give you enough time to get away, if the animal did not already run away.

Once again, this self defense technique is intended to be used towards animals and not people. When it comes to animals, they can often be much more scared of you than you are of them. For instance, your wife’s unyielding fear a tiny spider, even large animals have the same phobia and not surprisingly you can achieve the same affect with sound. Specifically, a lot of noisy irritating sound. This doesn’t mean that an angry mama bear or any other animal can’t come charging at you. They are known for doing so for sure. However, to play off of their fear, what often works is to make yourself big, loud and threatening.

This is shown to work with all kinds of predatory animals like bears, wolves, foxes, and other such animals. You need to make yourself as big as possible, stand tall, make your chest big, and stand on your toes. Try stomping your legs, beating sticks together, and anything else you can find to make noise too. Do keep in mind that this is for predatory animals, because facing down a bull moose will probably just get you gored by 14 foot antlers. Don’t face down non-predatory animals because it will not work well.

#5. Hand Down The Throat

Yep, I mentioned that this list was not going to be conventional, but when it comes to survival and self-defense moves, sometimes you have to get creative and they are often pretty unconventional. And this here technique does actually work in some instances. At any rate, if you are being attacked by something with big teeth, your first instinct might be to pull your arms and hands away from the mouth of the bear, wolf, lion, or whatever else. However, if left with no choice, meaning the animal is already on top of you, try shoving your fist as far down its throat as you can.  This will definitely surprise your attacker at any rate and force them into making a pretty quick decision to either continue or cease and run away bravely.

Most predatory animals are often much quicker than we are, and when your initial reaction is to flee or pull away, this only inspires them to follow and chase you more. Something that has been done before and has shown to actually work is shoving your hand and arm as far down the throat of the animal as possible. Seriously, this is no joke and there have been many real life cases where this has been done. It will choke the animal, confuse it, and most important of all, it cannot bite down with your hand down its throat. After your remove your arm, the animal will most likely flee, but if not, you might be in for a rough night.

I do honestly think that these are some of the best self-defense moves that live in the unconventional and creative side of our minds. And for the more conventional side, here’s a good article with some of the more standard self-defense weapons that are easily attainable and compact to carry. When the going gets tough, you need to do whatever you can to stay in one piece and alive, even if that means using anything and everything that is at your disposal. Recalling some portion of an out there article on crazy self-defense moves for an unlikely survival scenario could just be your savior. However I sincerely hope you never have to use any of these.