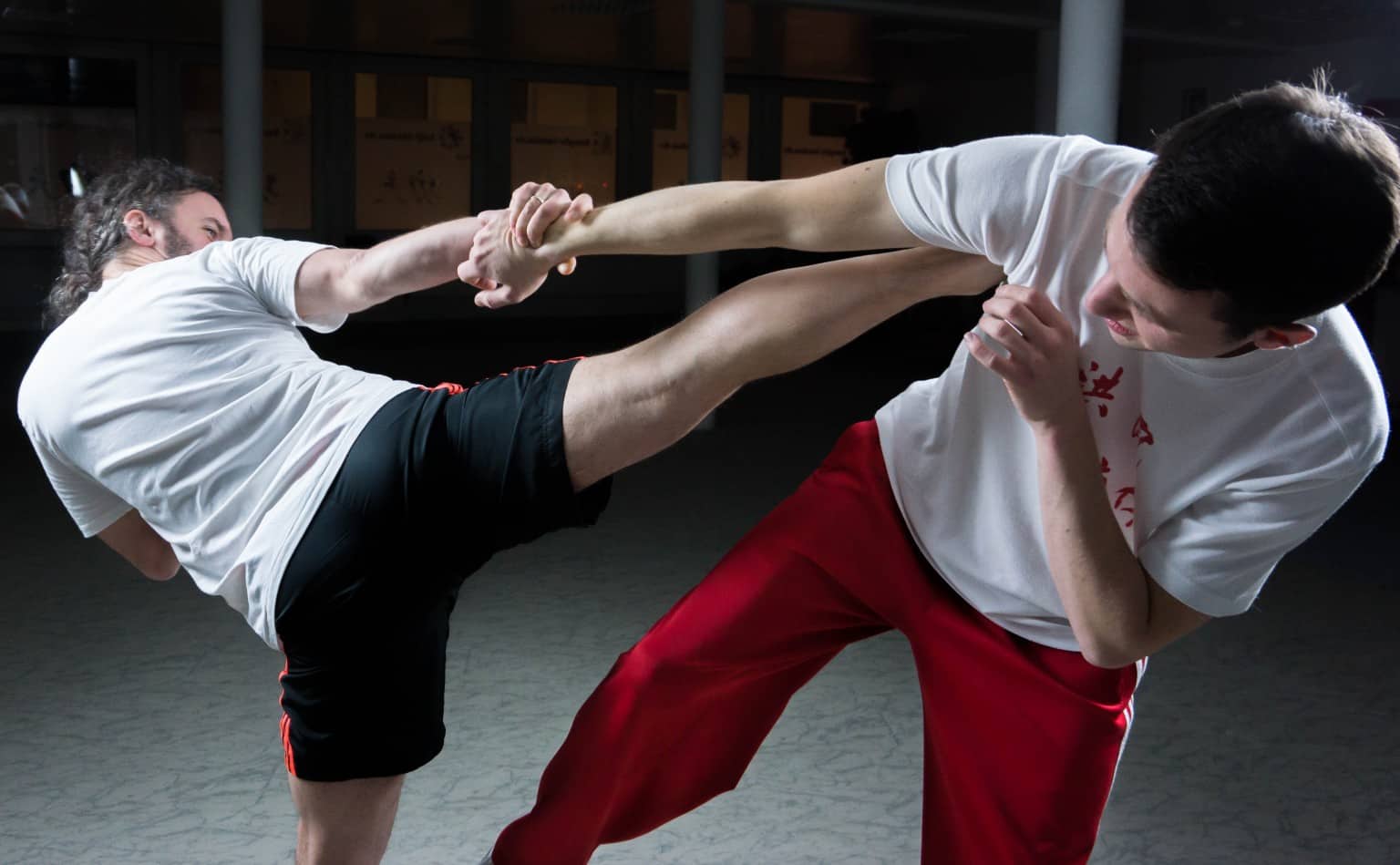 It has since spawned myriad forms or schools, some with an emphasis on sport and others on very real self-defense or military action.

This is a martial art that has combined techniques and philosophies from other arts into an effective combination. Still, one question remains: what type of weapon is traditionally used in sambo?

No traditional weapon is associated with the art of sambo. Sambo is a martial art that emphasizes hand-to-hand without weapons. However, combat or military-style sambo does incorporate training with knives and firearms.

Sambo is actually an abbreviation for the Russian phrase meaning “self-defense without weapons,” so that should tell you what you need to know regarding weapons in most training curriculums.

However, practical offensive and defensive maneuvers with weapons are incorporated into training for real combat. You can learn more below.

What is Sambo All About?

The basis of sambo is grappling, which includes throws, takedowns, and joint locks. Sambo also makes use of striking techniques, such as punches, kicks, and knees.

The goal of sambo is to take down an opponent, armed or not, as quickly and efficiently as possible.

Sambo practitioners learn to fight in a variety of different situations, including against multiple opponents and while standing up or on the ground.

Sambo is a popular and internationally recognized combat sport, though relatively unknown in many Western countries.

It has been featured in the Olympic Games alongside other kinds of wrestling and grappling such as Judo and Greco-Roman wrestling.

Sambo is unique among these grappling arts in that it includes striking, making it a well-rounded and holistic martial art for real-world purposes.

What are the Different Types of Sambo?

There are two main recognized types or branches of Sambo: Sport sambo and combat sambo.

Sport sambo is the kind that you would see in tournaments or competitions, and it closely resembles Judo thanks to the use of a jacket-like uniform and point-based scoring system.

Takedowns, throws, and locks are all allowed in sport sambo, chokes, punches, and kicks are not.

Combat Sambo is the branch of Sambo that is focused on real-world self-defense applications and military combat, though it is also practiced in a “sport” form, with additional safety gear.

It may include training with knives and firearms, as well as all the techniques allowed in Sport Sambo.

Other variations exist, some subtle and some fairly extreme. Freestyle sambo allows pretty much any kind of non-sambo to be employed (when a non-practitioner wants to face off against a sambist, for instance) or beach sambo… which is practiced on the sand!

So Are Weapons Employed in Sambo Training or Not?

But, sambo is a hand-to-hand combat martial art first and foremost, and combat sambo taught for practical applications will also include combat using and defending against knives, pistols, and rifles.

How are Weapons Incorporated into Sambo Training?

In general, combat sambo training will focus on disabling or disarming an opponent that is armed with a knife or gun as quickly as possible. Training also emphasizes using such weapons to turn the tide on an opponent.

So, while there is no traditional weapon associated with sambo as a whole, practitioners of combat sambo do train with knives and firearms as part of their established curriculum.

This makes sense when you consider the military applications of the art.

Are Weapons Used in Competition Sambo?

No. In sport or tournament sambo, there are no weapons used whatsoever and in old school sport sambo any kind of striking is usually not allowed either.

Is Sambo a Valid Choice for Self-Defense Training?

Whether you are interested in self-defense or simply want to learn a new martial art, sambo is definitely worth checking out. It is an incredibly effective system that has been battle-tested throughout the years.

Absolutely, yes. Assuming you can find a qualified and legitimate combat sambo instructor it has all the foundational elements you need for hardcore self-defense, including striking, grappling, takedowns, takedown defense, and preparation for dealing with multiple opponents as well as training with and more importantly defending against knives and firearms.

In this regard, sambo has much in common with modern, street-smart MMA.

Additionally, good sambo schools will put students into much live and freeform sparring to pressure test techniques and skills under stress against legitimately resisting opponents.

All sorts of flowery techniques from other martial arts work when a sparring partner will feed you a nice, telegraphed strike or charge, but precious few do when you are actually slamming into another human at full force.

However, it’s worth noting that not all sambo is created equal. As with any martial art or self-defense system, there will always be those who teach it more for competition or entertainment purposes only, and not for its intended use as a serious combat art.

When choosing a sambo instructor it is important to do your research and vet them; make sure that they are teaching authentic, combat-effective sambo and not just sport sambo or some other watered-down variation. Ask for references, and check them!