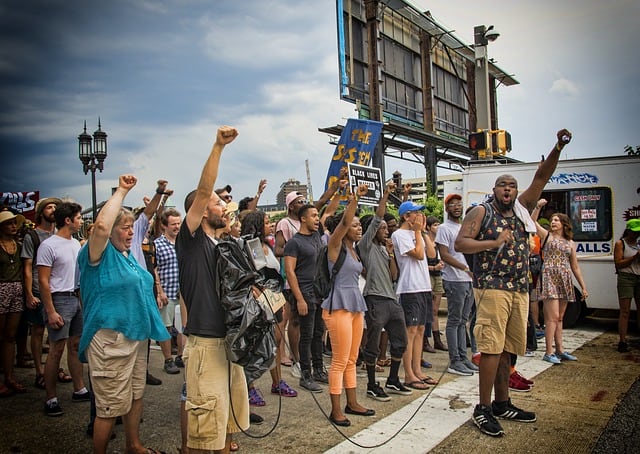 You probably have heard about the civil unrest and economic collapse in Venezuela. The footage and stories have been jaw-dropping to say the least. There are 10,000 citizens crossing the border every day just to get food, water, toilet paper, and medical supplies. They line up before the sun rises and store shelves are bare before noon in some cases. Often when supplies are not available the Venezuelans will riot and destroy property. So what caused all of this?

The scary part is that the events leading up to the economic collapse are not all that different from current conditions in the United States. Venezuela was not hit by a hurricane or earthquake. They were not hit with an EMP blast or attacked by a foreign nation. They have not been overrun with terrorist attacks. What has happened is extreme national debt, an overly controlling government, and ridiculous currency manipulation. Sound familiar?

We have all seen the homeless dig through dumpsters outside of restaurants to pick out the fresh food that was scraped off of plates. This is not the type of desperation to which I am referring. Imagine that there were no restaurants. Imagine that there were not wealthy people that could afford to throw out half of the food they fix for their families. Those that had money for food find the shelves empty both within the borders and outside the borders. This is desperation, and this is the reality in Venezuela.

People react to desperation differently. How would you feed your family? Some have turned to violence. If you were smart enough or lucky enough to have food for your family, you would also have to be prepared to defend that food. Break-ins and attacks on the street are common. Of course trash cans and dumpsters are an option, but they are often picked clean. Some people have even taken to hunting cats and dogs in the streets. Rarely do you see true survival in an urban setting, but in this scenario people must be ready for it. If you live in the country or even in suburban areas, finding wild edibles and meat will be an essential skill.

You Cannot Count On Medical Care

While most of us have always had the option of calling 911 or driving to the emergency room, this is not a valid option for Venezuelans. The ambulances are either overwhelmed or shut down completely. The electricity and life support machines are out in most hospitals, so doctors are forced to improvise. The Luis Razetti hospital in Barcelona currently looks like a war zone. Most people who attempt to get care are forced to lie in hallways bleeding for days. No food or water is provided at the hospital, and those lucky enough to get a broken down bed must balance to keep it from tipping over.

What do we learn from this? When a collapse occurs, those that are prepared will know how to handle their own medical care. Basic first aid such as CPR, how to stop bleeding, mouth to mouth, splinting broken bones, treating fever, and the Heimlich maneuver must be practiced in advance. In addition, medical supplies need to be on hand. Please remember the type of desperation these folks are feeling. Imagine a child in your neighborhood is sick or dying, and their father knows that you have medical supplies. It would be tempting for that man to try and take what is yours. Be ready to defend those supplies.

Many people assume that because an economic collapse takes some time to develop that shortages will also take some time to develop. This was not the case with Venezuela. Within a few weeks of the collapse, products that were most needed had been picked clean. Bread, milk, sugar, and eggs were impossible to find within days. Some stores were able to restock their shelves, but many did not bother because of the looting that took place. Currently only 15% of the food, water, and medical supplies needed can be obtained within the borders of Venezuela.

If this is not a strong argument for prepping, I do not know what is. Those that wait until the collapse to stock up on supplies will be out of luck. Only those that see it coming and build up their supply storage will be able to survive a disaster such as this. Do not wait.

I know it may seem obvious, but not to everybody. When your economy collapses, conventional money is not worth much. Right now bartering is one of the best ways to get supplies or services. Another option is stocking up on gold or silver. These precious metals will always retain their value, but become even more valuable when the dollar crashes. In fact the Venezuelan government has greatly depleted their foreign reserves and has been forced to ship gold to Switzerland to help pay for their debt.

This means that preppers should have either precious metals or bartering items on hand before the collapse. Gold and silver are a great option, but can be expensive to stockpile. Another option is to think of other items that would be hard to find. Cigarettes and alcohol are items that would be in high demand. Luxury items like coffee and chocolate are also good to keep on hand.

Your Diet Will Change

As food has become harder to find, Venezuelans have had to make a drastic shift in their diets. Even those that wait in line overnight and are lucky enough to find food have opted for less expensive ways to fill their bellies. The shift has been away from any types of meat, milk, or eggs and more towards grains that provide energy and curb hunger. This has been common in any recession or collapse in history. Bread, rice, beans, and other grains become the bulk of the food supply. One family was quoted as having said that they have eaten no meat of any kind since December.

Think about this when you are prepping. If you are fortunate enough to live in the country, hunting, trapping, and fishing are vital skills. Take the time to practice these skills and build up your meat supply in advance. In addition, preserved meat becomes very important. Power outages could shut down your freezer, so making jerky or canning meat could make a huge difference. If you want protein, set yourself up with a meat stockpile in advance.

Since the collapse has taken place, food, water, and medical supplies are not the only shortages being faced. Basic toiletries are almost impossible to find. Hygiene can greatly affect the health of you and your family, so finding ways to stay clean is important. Soap, toothpaste, toilet paper, and shampoo are the items most difficult to find. If the power goes out then the water pumps will not operate for many people. At one point it was reported that the Venezuelan government was so desperate for toiletries that they were considering trading oil for basic supplies.

There are really two options to avoid this situation. You can stock up on these supplies in advance. Thankfully, most of these items are inexpensive and have a long shelf life. The other option is to find alternative methods of hygiene. You can make your own soap or take smoke baths to kill bacteria on your body. If you live in the country you can bathe in creeks or rivers. You can use charcoal or baking soda to brush your teeth. You can even use fabric or leaves to wipe. At many points in history people used a single rag to wipe and washed it after each use. The more pleasant option is definitely prepping your toiletries.

Crime Is Out Of Control

Any time that conditions are rough and people are desperate, crime will increase. Some of this crime is general outrage that materializes in the form of riots. The people feel that their country has abandoned them, and they are not happy. These riots have gotten worse as this disaster has continued. Some crime is related to acquiring supplies. This may mean looting or may result in robberies and break-ins. Just in the first quarter of 2016 there were 107 separate cases of major looting in Venezuela, and it continues to get worse.

Some of this crime will be due to the rise of the black market. When supplies are not available through normal channels, criminals will always take advantage of the situation. They will steal supplies in bulk and then sell them at a huge mark up. Through this process they will hurt or kill anybody that gets in their way. Drug use and prostitution may increase as people become hopeless. The bottom line is that local police have lost control and people are free to commit whatever crimes they please.

The lesson here is that self-defense and security is of utmost importance. Everybody in your family should know how to defend themselves with or without weapons. Your home should be reinforced to prevent intruders, and valuables should be hidden. In an economic collapse you really need several firearms in your home to defend your supplies and family. In addition, anybody having to leave the house should be armed to prevent a robbery. When desperation sets in, you cannot trust anybody.

It is a bit surreal to talk about a collapse like this happening in the United States, but it is very possible. Our government is making all of the same mistakes that Venezuela has made, and it does not intend to change. Without getting too political you can see that the socialist and liberal powers in Venezuela allowed open borders, funded heavy benefits for the poor, controlled currency, relied on foreign aid because of wasteful spending, and allowed corruption. It hits a little too close to home for me.

Now the Venezuelan government is forcing people out of their homes into labor camps where they will be forced to work on plantation farms. The unfortunate part of this situation is all the people that suffer and die. It seems that in life, change is almost always motivated by pain. If things in the US go like recent events in Venezuela, we will have plenty of pain to prompt a swift and dramatic change.

10 thoughts on “Venezuelan Collapse – What Can We Learn?”

Hyperinflation: Protecting Yourself and Your Family
Economic Collapse: 8 Signs it is Close
Post SHTF Economics: How to Survive when Money Becomes Useless