Selecting your firearms is one of the most important things you can make as a prepper, because these are the guns that you will use to keep your, your family, and your property safe in the event of a disaster or a home invasion.

The purpose of this article is to outline five specific types of popular guns or guns that are commonly cited as being ‘good choices’ for a survival situation and then discuss why these guns will actually be poor ones for your survival armory.

That’s not to say that these gun types are bad by any means.  Most of them have their place and are fun toys for the shooting range. They just aren’t the best options to have with you in a self-defensive or survival situation.

Here are the top five most popular types of guns not suitable for SHTF:

Single shot breech loading shotguns and rifles are often cited as being good SHTF rifles.  Yes, they only hold one round obviously, but proponents will argue that because they are so simple they will never fail you.

You simply press a button or lever and the barrel drops down.  Load your round, snap the barrel back into place, and cock the hammer to fire.  There are so few moving parts in a single shot shotgun (especially in comparison to modern shotguns and rifles), that you can most likely count on them still running flawlessly a hundred years down the road.  Plus, single shot firearms such as these tend to be dead cheap as well.  So why are they such a poor choice for SHTF weapons?

Let’s answer this question by citing an example of what could happen in an SHTF situation. Let’s say the power grid has collapsed and will stay down for a very long time.  You’ve wisely stocked up on enough food and water to last you a year, but word has gotten out and now you have a group of five or ten armed (and desperate) marauders descending into your home, looking to kill you and your family members and steal your stockpile.

Answer honestly: in this kind of a situation, is a single shot shotgun or rifle really the weapon you would want, knowing full well that many of your opponents could be armed with semi-automatics? This should end the discussion right there.

Pistol caliber carbines are also often commonly cited as good choices for SHTF weapons.  The logic goes that you only need to stock up on one kind of ammunition because your pistol and carbine will both fire it.  Sometimes, both a carbine and pistol will even accept the same magazines: the Beretta CX4 Storm Carbine, for example, will accept either Beretta Px4 or 92FS magazines depending on the model.

Here’s a piece of advice: if you have a shoulder fired weapon, it should fire rifle ammunition, plain and simple. The reason for this is because pistol ammunition is significantly underpowered in comparison to rifle rounds, and while velocity will be a little higher when it’s fired out of a longer barrel, it’s still underpowered.

Furthermore, a pistol round is not a suitable choice for big game hunting such as deer or elk. This is another situation where it would be more desirable to have a larger caliber.

All in all, while it does undeniably sound appealing to have a handgun and a long gun that fire the same round, you would still be better off having a long gun that fires a rifle round.  Rather than invest your money in a pistol caliber carbine, invest it in something such as an AR-15, AK-47, or M1A instead. 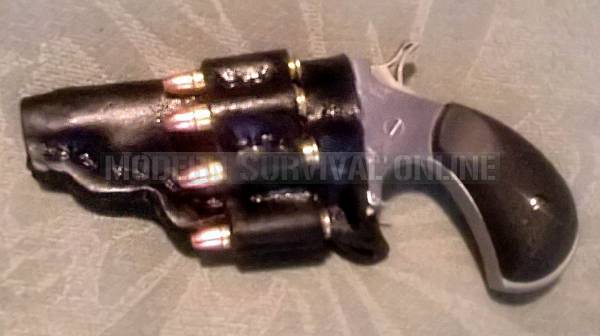 The pocket pistol market is booming right now, because many people strongly want something that all they have to do is place it in their pockets. This could also initially make a pocket pistol such as a Ruger LCP or Kel-Tec P-32 an appealing choice for an SHTF sidearm, because it will be so easy to hide on your person when you absolutely don’t want anybody to know that you have a gun on you.

The reality, however, is that you should never consider a pocket pistol as an SHTF sidearm.  They are extremely close range weapons due to their small size and caliber. Most pocket pistols are chambered for .22 LR, .25 ACP, .32 ACP, or .380 ACP. None of these rounds is considered by experts to be an effective man stopper.

The overall small size of a pocket pistol not only means that you can’t get a full firing grip on the weapon, the short barrels also translates to the velocity out of these guns being very low on top of the fact that they are underpowered. In addition, pocket pistols tend to have high recoil for their caliber because of their lightweight, which doesn’t permit fast follow up shots against multiple opponents.

In short, if you need a gun that you can just throw into your pocket before heading to the restaurant or the gas station, a pocket pistol will do. But if you need something you can count on to defend yourself and your family in an SHTF situation, leave it in the safe.

Not only are single action revolvers such as the Colt Peacemaker or Ruger Vaquero incredibly beautiful, they are also a blast to shoot. They point naturally and the accuracy is superb.

That being said, a single action revolver of any kind is an absolutely terrible choice for an SHTF sidearm. There are three reasons why…

The first reason is that single action revolvers tend to lack the strength and durability of double action revolvers or semi-automatic pistols. Spare parts for these guns are not cheap and will likely be very hard to find in an SHTF situation.

The second reason is that reloading times on a single action revolver are slow; you have to open the latch on the side and then remove each spent shell casing and load in a new one individually.  This could be detrimental in a self-defense situation where you need to get back into the fight now.

Finally, you have to manually cock back the hammer each time you pull the trigger (hence it being single action) to fire.  If you need to send a lot of lead downrange against multiple opponents who are trying to kill you, this will naturally put you at a disadvantage that could prove fatal.

This one may surprise you, especially because surplus rifles such as the Mosin-Nagant are commonly cited as being excellent SHTF rifles due to their durable build quality, cheap price, and generally affordable ammunition.  Other rifles besides the Mosin-Nagant that fill this criteria include Mauser rifles, Lee-Enfields, Springfield 1903s and Arisaka rifles.

So if you’re on a budget, a military surplus rifle will understandably sound like an enticing option.  Nonetheless, you should still strongly consider other options.  The short answer is that these rifles were built for another time (early 1900s) and are therefore outdated by today’s standards.  Not only are these bolt-action rifles, but they also have very long barrels that can make them difficult to maneuver in home defense or close quarters situations.

Furthermore, the ammunition for them may be cheap now, but will unlikely last long in the event of an ammunition shortage or disaster situation. Surplus rounds such as 7.62x54r, 8mm Mauser, or .303 British will not be nearly as commonplace as rounds such as the 5.56x45mm NATO or .308 Winchester.

If you want a surplus rifle as a collector or for hunting on a budget, it’s not a bad choice. But for a serious SHTF defensive weapon, there are far better options out there.

When putting together your personal survival armory, we highly recommend that you skip over any firearms that fall into the above categories for the reasons we have explained.  Your chances of survival and your ability to defend your family and property will go up if you opt for different options instead.