Everyone knows small gasoline fueled engines are noisy and loud enough that hearing protection should be used when working with or around devices thus powered. Noise pollution is serious, especially in urban areas but little thought is generally given to the racket when out in the country. In a world without rule of law (WROL), anything that draws attention can be lethal. Engine powered generators are not only so loud that they can be heard for miles in the country and more so at night, the electricity they produce likely powers lights that can also be seen for miles and miles. Generators, arc welders, air compressors, chainsaws, hydraulic wood splitters, and almost anything powered by a diesel fueled engine produces unacceptable levels of noise for anyone wishing to lay low and by so doing not draw attention to them and their valuable resources.

Every serious prepper should own a large capacity fueled engine driven air compressor not only to air tires but because of the many pneumatic tools that are available, especially in the event of a Carrington or other EMP producing event. Ignition circuitry for these engines is simple, easy to work on, and likely uses some version of a magneto for spark impulse generation. As a result, it is an easy matter to obtain spare windings and components for each engine and then suitably protect these spares from the effects of EMP.

Noise from chainsaws is particularly vexing and their raucous two cycle engines can often be heard echoing around the countryside. Yes, I know there are AC mains powered chainsaws and air compressors, and that Kubota offers a chainsaw powered by hydraulics from their diesel engine RTV, but these all have drawbacks that may ultimately limit WROL woodcutting to axe and saw.

Gasoline powered cars produce more horsepower and run more quietly than do the engines powering my air compressor, arc welder, wood splitter, and generators. Piston airplane motors such as those made by Lycoming and Continental are loud, loud, loud. The reason for this is that they are not muffled. This configuration produces maximum horsepower. I suspect that is the reason small gasoline driven engines are equipped with such ineffective mufflers as good muffling reduces horsepower. Most of my small engine driven devices are powered by V twin engines or by large bore, high horsepower singles. Realizing these type engines generally produce more power than is actually used, I decided to adapt after market automobile mufflers to these engines in attempt to reduce exhaust noise.

Anyone who has worked on automobiles understands that holes in the exhaust system result in noisy, loud operation. For this reason there are many aftermarket ‘fixes.’ Holes are typically caused by salt accelerated corrosion and many first rate vehicles use stainless steel exhaust components to reduce corrosion. The cheap after market fixes are typically a heat hardening paste or impregnated wrap that cures from the exhaust heat. I mention this not because I would ever use such on my automobiles but that these fixes might be useful when trying to plug small leaks in your modified generator exhaust system. I used the paste in place of pipe joint compound when assembling the generator exhaust described following.

Most small engines have their mufflers and spark arresters bolted directly to the engine. The reason for this is that the engine/muffler combination when mechanically connected to one another eliminates vibration stress between the components. Most small engine driven appliances are vibrationally isolated from their equipment frame with rubber bushings. The type of aftermarket mufflers we are discussing may be too large to simply hang off of engine exhaust manifold tubing.

Engine vibration may cause stress cracks in welds and bends of a heavy aftermarket exhaust system and engine exhaust heat may weaken exhaust tubing to the point it actually bends or collapses under the weight of unsupported heavy aftermarket mufflers. I mention these things because exhaust mufflers will get hot and if the tubing that connects them to the engine sags and the mufflers and/or tubing nears or comes in contact with plastic and rubber hose it may ignite a fuel source, especially if the material contains gasoline.

You should not support an aftermarket muffler system by directly connecting it to the equipment frame because the small engine movement allowed by the rubber bushings connecting the engine to the frame will quickly wreck any such system. At some point you might think exhaust flex tubing is the answer, and it may be for your application. I’ve just never had much success using such tubing in attempt to reduce engine noise, as the flex junctions themselves are leaky to exhaust gasses.

You should never run your generator or fueled engine appliance inside your home or attached garage for the same reason you should never cook or heat with charcoal inside your home. Both produce copious amounts of carbon monoxide (CO). CO is an odorless gas that inhibits the hemoglobin in your blood from carrying oxygen to your body. The symptoms are insidious and when coupled with mental confusion caused by a decreased oxygen supply to the brain, all too often result in faulty decision making directly resulting in death. If your garage shares a common wall or roof with your house, please please do not run fueled engines in the garage. This can kill you and your family.

Please do not run your uncovered generator in the rain either. Water can cause electrical shorts that can and will kill you. Please do not connect your generator directly to your house electrical wiring. You may think, ‘I’ll turn off the electrical breakers’ and rig what is called a ‘suicide cord’ with two male plugs – one for the generator and one to plug in the wall. Folks, there’s a reason this type cord is called a suicide cord. Supposing you did manage to make the connection to your house without killing yourself, now you have created a lethal condition for any electrical linemen that just may be trying to restore electrical service. If you miss just one circuit breaker, if someone flips on a circuit breaker, or if a circuit breaker fails, your generator is now sending lethal voltage outside your house down the AC mains lines. That voltage just may electrocute the very man who is trying to make things work again. THIS IS NOT WORTH THE RISK TO HIM OR TO YOUR FAMILY and at the very least; you will be sued, sued, sued.

The biggest problem you will face in trying to adapt an aftermarket automobile muffler to your small engine is devising a method to adapt the large bore of the muffler to the very small bore of the exhaust manifold. There all sorts of ways to do this, the easiest is with an adaptor or series of adaptors sold in aftermarket automobile parts stores.  This adaptor is a short piece of metal tubing whose diameter of one end is larger than that of the other. Harbor Freight sells various size pipe expansion tools that will work with automotive exhaust tubing. I was happily surprised that the Lincoln arc welder did not need any adapter or exhaust modification. A Walker automotive muffler with 1 3/4 inch tubing was connected to an identical size ninety-degree fitting that in turn fitted snugly over the welder OEM muffler exhaust pipe. Standard automotive exhaust clamps were used to make the connections exhaust gas tight. The OEM muffler on the Lincoln welder was so well made and strong that I decided to make a direct connection and leave the muffler unsupported. Notice the exhaust gas operated cap on the open end of the upward positioned muffler exhaust (see photo). This keeps insects and debris out of the exhaust system when the engine is not running. It was purchased from Tractor Supply. Thus far, I’ve not noticed any sag in the muffler ninety-degree bend due to heat weakened metal. 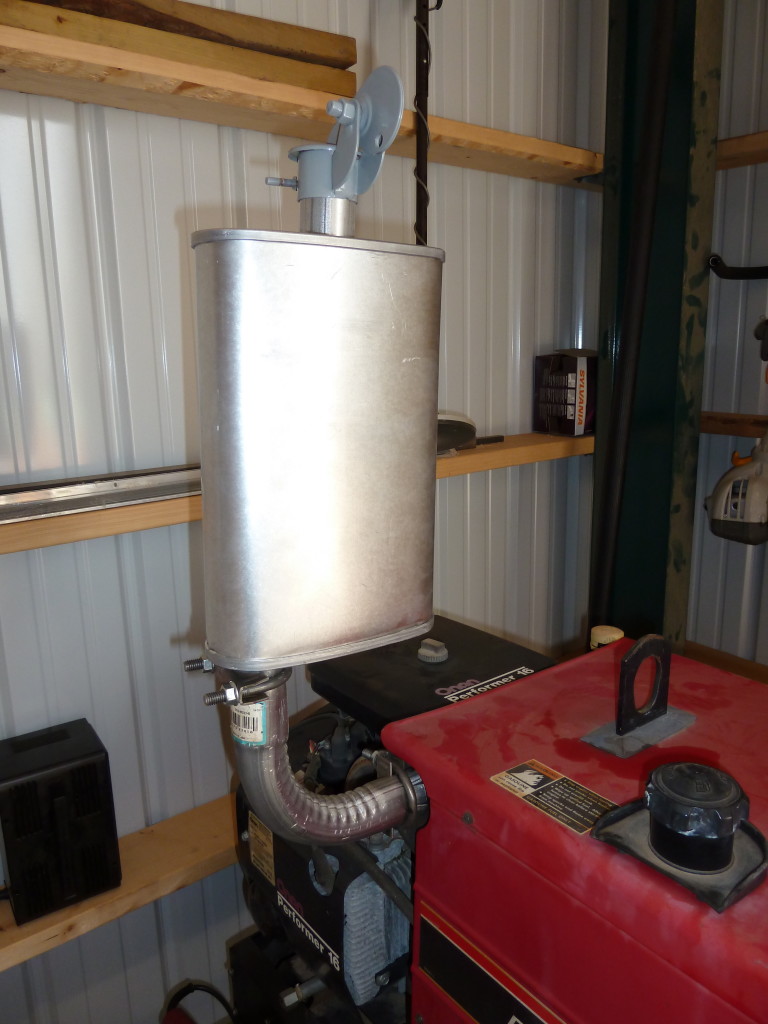 The generator presented a different problem in that I couldn’t locate a reducing fitting small enough to connect the muffler to the exhaust manifold tubing. I considered welding a small section of 1 7/8” pipe directly to the OEM muffler but the exhaust holes in it were spaced much larger than this size. A plate with appropriate size hole could have been welded directly to the OEM muffler and then the small section of tubing could have been welded to the plate but I didn’t want to sacrifice the OEM muffler.

I ended up welding a conventional 1” pipe coupling to the muffler. As you can see from the photos pipe and pipe fittings were used. It turned out that a 1” pipe nipple would just slip over the exhaust manifold tubing. I used a hacksaw and made eight cuts uniformly spaced down the end of the pipe nipple that slipped over the exhaust manifold. The reason I did this was so the clamp could tighten the nipple securely onto the manifold tubing (see detail photo).

If you have to purchase pipe for doing something similar, non-galvanized pipe is easier to weld. I just happened to have galvanized on hand and it is a long trip to the plumbing store. There was no doubt the weight of this muffler would be too much for the small size and length of the exhaust manifold tubing, so I suspended the muffler from the generator/engine frame using a length of farmer’s ubiquitous universal repair agent (bailing wire). So far this combination has caused no problems and seems to work well. I intend to order a new exhaust manifold for this V twin engine and replace the clamped pipe nipple with a welded on pipe nipple and by so doing eliminate all possible exhaust leaks. 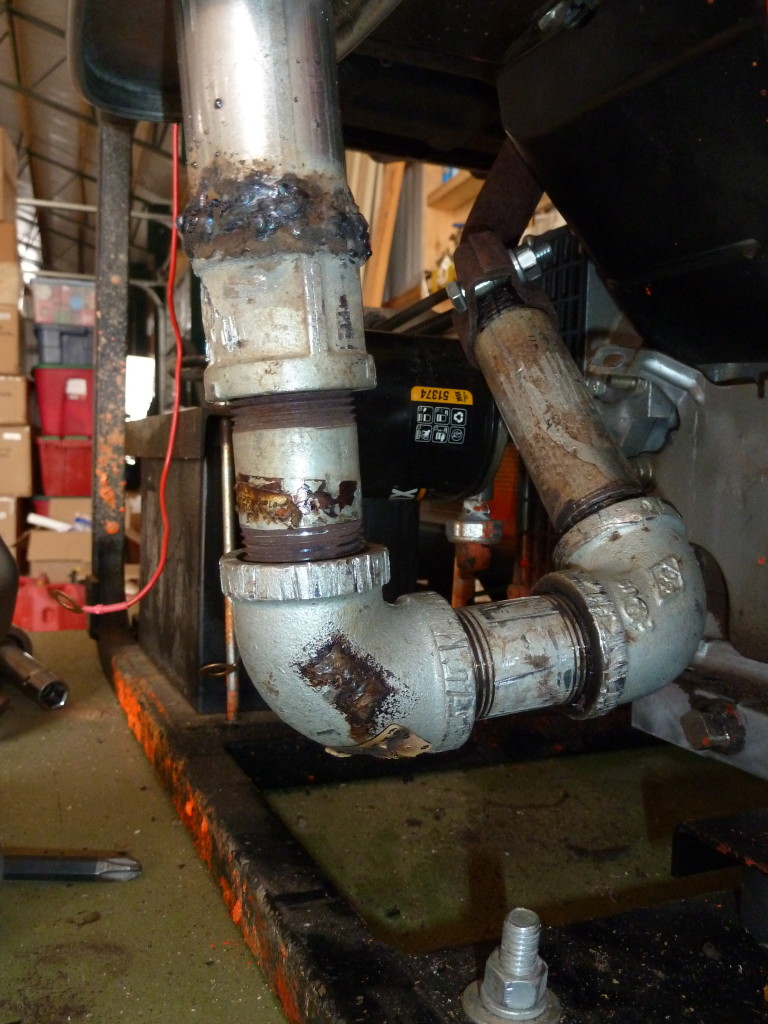 So how do these mufflers work? Not as well as I wished because I hoped to hear only mechanical engine noise. The Walker automotive mufflers reduced perceived OEM muffled engine noise by about half, which is still significant. I spent some time eliminating small leaks as the smallest increases noise. A future project might be to connect the exhaust to a buried drum and then run an exhaust out of it. As I typically run the generator and welder inside my shop, these mufflers accomplish my goal.

Hope this helps someone,

We will not spam you.
Print
981
Shares

12 thoughts on “Silencing Small Fueled Engines and Other Considerations”