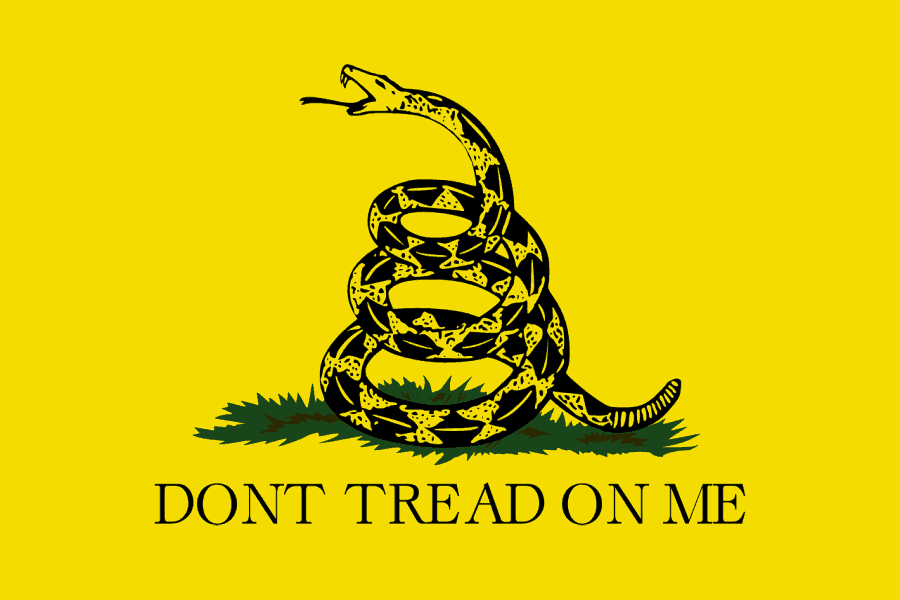 You have all seen the Gadsden flag, whether you know it or not. On bumper stickers, on patches, on signs and on flag poles, the Gadsden is an icon of Americana and remains a powerful symbol today. The highly distinctive yellow field with a coiled rattler poised and ready to strike above the admonishment of “Don’t Tread On Me” makes clear to one and all what the bearer is about.

The Gadsden has a distinguished and well known history reaching all the way back to 1778, but in more recent times it has been resuscitated as a political symbol.

In today’s article, we’ll take a gander at this classic flag’s origin as well as its use in elder and modern times.

The Gadsden flag is instantly recognizable, and was designed that way. The field of the flag is a bright lemon yellow, and placed in the center is a rattlesnake on a small patch of green grass. The snake is coiled, standing upright facing the flagpole, with fangs bared and forked tongue tasting the air. Beneath the snake on its grassy patch in capital letters is the warning “DON’T TREAD ON ME”.

The historical Gadsdens had a few minor variations, such as which way the snake faced, or the font of the letters printed on it. You’ll rarely if ever see those variations today, and I can bet a healthy sum of money that the only “classic” Gadsdens you have seen are the typical variation.

That, or the “meme’d” versions, which are not proper Gadsdens at all, including the “No Step on Snek” variation with its crudely sketched serpent and blatant misspellings, to the FAAFO Cobra, a menacing king cobra coiled around a frag grenade.

While silly, these modern memes just further serve to show the enduring appeal of the message the Gadsden stands for: “Leave me be, and I’ll leave you be, but if you cross me you shall pay dearly for it.”

The Gadsden flag is named after one Christopher Gadsden who created it during the American Revolution. Gadsden was the leading patriot in his home state of South Carolina during the Revolution, as well as a delegate to the Continental Congress, Brigadier General and merchant. So aside from being an all-around go-getter he also designed the awesome flag that bears his name to this very day.

Before we delve much further into the history of the Gadsden, it is important to note that the rattlesnake it bears, particularly the timber rattler common to regions all around the 13 original colonies, was very popular as a symbol of the then nascent America.

As early as 1751, Benjamin Franklin was making use of the same snake in his famous “Join, or Die” woodcut that urged the colonies to unify. 24 years later it would be added to the nameplate of the Massachusetts Spy. The year after Franklin would again reference this snake as a suitable symbol for America, noting how eternally vigilant and deadly the snake was, though fair in its use of violence as it always cared enough to warn away a potential aggressor, traits he thought highly admirable and characteristic of us culturally.

A few years later, the Continental Congress officially employed the timber rattler on the seal of the then-new War Office of the Army, and remains in continuous use, slightly modified, to this very day upon the Department of the Army Seal, Emblem and Flag.

So it makes much sense that Gadsden sought to use such a popular and admired icon of this deadly reptile on his own flag. In the year of 1775, the newly-minted Continental Navy, ordered by George Washington, was headed by Commodore Esek Hopkins.

Our Navy was not so impressive then, only seven ships, but they had a critically important mission; interception of British ships hauling supplies bound for their troops in America.

To assist in this mission, the Second Continental Congress saw fit to commission a force of Marines to accompany the new naval ships on their journeys.

The first of the new Marine companies enlisted in the city of Philadelphia, and it is recorded that these Marines carried drums painted an eye-hurting yellow, upon which was painted a coiled rattlesnake with the motto “Don’t Tread on Me.” In essence, they toted drums with the first instance of what Christopher Gadsden would later place on his flag.

Gadsden, then a member of the Marine Committee, was at the Congress, representing South Carolina. The objective of the Marine Committee was to appropriately outfit the naval force to successfully carry out their first mission, due to depart in December of 1775. It was around this time that Gadsden presented Commodore Hopkins the flag that today bears his name, with the intent that it should serve Commodore Hopkins as the standard of his flagship.

Commodore Hopkins displayed the flag from the main mast of the ship, and the rest is history. Gadsden would later present the South Carolina Congress with a copy of that same flag in Charleston.

The Gadsden Flag is outrageously popular today among libertarians, conservatives with an anti-authoritarian bent, and generally any person who wishes to be left alone by the powers that be. It is often used as a shorthand indicator for a patriotic, liberty-loving individual. As one of America’s oldest symbols, its use today embodies what were no doubt the same sentiments our forefathers sought.

The Gadsden’s timber rattler emphasizes non-aggression, but non-aggression under threat of retaliation, not some hippy we-are-all-the-world nonsense.

Considering the rattlesnake, it is easy to understand what is being implied: a rattlesnake packs a devastating weapon in the form of its venom, venom that it can deliver with millisecond speed and precise accuracy. Even so, the timber rattler is not an aggressive snake by nature, only striking in defense, usually when trod on by the unwary or foolhardy.

To prevent this occurrence, the timber rattler will give a warning buzz with the rattle on its tail, warning any prospective or potential foe to make tracks in the opposite direction. This also warns the unwary, fairly, before they commit a blunder that is sure to result in severe reprisal.

In this way, the timber rattler now as then represents America, and the sentiments of freedom-loving Americans, quite well: leave me be and I shall not harm you, but screw with me and pay mightily.

While malcontents and rapacious, liberty-hating Leftists willfully misconstrue the Gadsden flag as a symbol of anarchy, government overthrow or other more nefarious ends, that is patently not what the flag stands for and we have plenty of history to back that up.

As a symbol of freedom, caution and patriotism, the Gadsden is a common sight among preppers, 2nd Amendment proponents, and patriotic citizens of all stripes. Compare this in patch form to others commonly seen among such groups and it is far tamer than other historical symbols flags like the ever-popular Jolly Roger, or symbols such as Punisher skulls and so on.

Most notably, the Gadsden flag was adopted around 2009-2010 as an unofficial symbol of the American Tea Party movement. This earned the ire of aforementioned Leftists who hated what the Tea Party stood for, and they wasted no time reclassifying the Gadsden as a symbol of hostile political activism.

The Gadsden Flag is a proud and noble symbol of American patriotism and resistance to tyranny. From its humble beginnings adorning the side of drums to its universal and ubiquitous appeal today among preppers, libertarians and advocates of small-government, the Gadsden flag’s yellow banner and ferocious rattlesnake will persist for centuries more.

We will not spam you.
Print
15
Shares