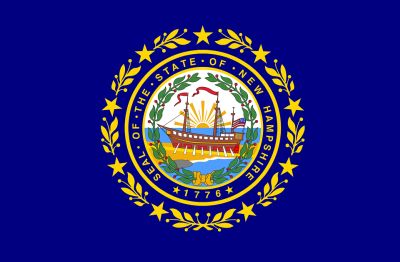 New Hampshire is a remarkably good state for knife ownership and carry since a major overhaul of their laws beginning in the second decade of the 21st millennium.

In fact, except for one quibbling potential restriction on knives with integral “D” handguards or knuckleduster handguards you may own and carry absolutely any other kind of knife you would like to in the state.

To say that this is a breath of fresh air among all the other stereotypically restrictive New England states is an understatement!

The laws concerning knives in New Hampshire really only concern themselves with criminal activity using a knife, not defining and restricting any particular kind of knife do two features, action, blade length or anything else.

There are a few minor laws that you would be wise to learn and remain cognizant of, particularly when it comes to selling and transferring knives, but these are all minor affairs.

To top it all off, New Hampshire also has strong preemption laws meaning you will be dealing with one set of rules throughout while in the state. We will get to the good news just below the break!

New Hampshire references knives in their definition of “deadly weapon”, specifically any knife that is used, intended to be used, or threatened to be used and is capable of producing death or serious bodily injury, with serious bodily injury being defined as harm to the body which causes severe, permanent or protracted loss or impairment of health or the functionality of any body part.

To this end, any knife of any kind is a deadly weapon in New Hampshire, but this is not a blanket prohibition; New Hampshire is concerned with how dangerous tools are used as weapons in the commission of crime, not with banning everything under the sun in a misguided attempt to reduce criminality

This is incredibly sane in a region that is known for invasive Big Brother government policies.

That being said, no felon may be in possession of a knife or other deadly weapon as defined above and in the statutes. This applies for felons charged and prosecuted in the state of New Hampshire as well as those who have felony records from elsewhere.

Is also worth being aware of New Hampshire’s prohibition on metallic, or brass, knuckles, and that whosoever has them in their possession, sells or transfers them, or carries them on their person is guilty of a misdemeanor.

I mention this only because there are a few kinds of modern and vintage knives that have an integrated, large handguard that wraps around the hand and some old military knives with knuckleduster style finger guards. These knives are potentially illegal in New Hampshire.

But the good news keeps on coming, as New Hampshire has very solid preemption rules concerning knives, and no municipality will be able to enact laws that are more stringent than the state laws governing the ownership and carry of knives and other edged weapons.

A person may carry any kind of knife they desire concealed in New Hampshire without benefit of a permit so long as they are not carrying it or using it for any criminal purpose.

New Hampshire makes no distinction between carry of any knife with a permit as opposed to without a permit, and you may carry any knife you choose that so long as you are not using it for any criminal purpose or carrying it with criminal intent.

Open carry of all kinds of permitted knives is completely legal in New Hampshire.

There are no explicitly forbidden places that will keep you from carrying a knife in New Hampshire, but now as always it is usually in your best interest to exercise a certain amount of care before taking a blatant weapon into any sensitive area like a school, government installation, hospital, courthouse and so forth.

There is at least one state in New England that still believes in freedom and that state is New Hampshire. New Hampshire has excellent knife laws by any state’s standards, not just New England’s, and you can carry virtually any kind of knife you want openly or concealed with no permit necessary.

Aside from a questionable restriction on any knife that has an integrated hand and closing or knuckleduster handguard you won’t have any issues whatsoever when it comes to knives in this state.

The following definitions apply to this code.

I. “Conduct” means an action or omission, and its accompanying state of mind, or, a series of acts or omissions.

II. “Person”, “he”, and “actor” include any natural person and, a corporation or an unincorporated association.

III. “Element of an offense” means such conduct, or such attendant circumstances, or such a result of conduct as:

(a) Is included in the definition of the offense; or

(b) Establishes the required kind of culpability; or

(c) Negatives an excuse or justification for such conduct; or

(d) Negatives a defense under the statute of limitations; or

IV. “Material element of an offense” means an element that does not relate exclusively to the statute of limitations, jurisdiction, venue or to any other matter similarly unrelated to (1) the harm sought to be prevented by the definition of the offense, or (2) any justification or excuse for the prescribed conduct.

V. “Deadly weapon” means any firearm, knife or other substance or thing which, in the manner it is used, intended to be used, or threatened to be used, is known to be capable of producing death or serious bodily injury.

VI. “Serious bodily injury” means any harm to the body which causes severe, permanent or protracted loss of or impairment to the health or of the function of any part of the body.

I. A person is guilty of a class B felony if he:

(a) Owns or has in his possession or under his control, a pistol, revolver, or other firearm, or slungshot, metallic knuckles, billies, stiletto, switchblade knife, sword cane, pistol cane, blackjack, dagger, dirk-knife, or other deadly weapon as defined in RSA 625:11, V; and

(b) Has been convicted in either a state or federal court in this or any other state, the District of Columbia, the Commonwealth of Puerto Rico, or any territory or possession of the United States of:

(1) A felony against the person or property of another; or

(3) A felony violation of the laws of any other state, the District of Columbia, the United States, the Commonwealth of Puerto Rico or any territory or possession of the United States relating to controlled drugs as defined in RSA 318-B.

I-a. A person is guilty of a class B felony if such person completes and signs an application for purchase of a firearm and the person is a convicted felon under the provisions of paragraph I.

II. The state shall confiscate to the use of the state the weapon or weapons of persons convicted under this section.

III. It is an affirmative defense to a charge under this section that a felony of which a defendant has been convicted in another jurisdiction would not have constituted a felony in the state of New Hampshire at the time such felony was committed.

159:15 Possession of Dangerous Weapon While Committing a Violent Crime. –

I. A person shall be guilty of a class A misdemeanor if that person uses or employs slung shot, metallic knuckles, billies, or other deadly weapon as defined in RSA 625:11, V during the commission or attempted commission of a violent crime.

II. “Violent crime,” for purposes of this section, means “violent crime” as defined in RSA 651:5, XIII.

I. Any person who uses a pistol cane or sword cane on another person with intent to commit a crime punishable as a misdemeanor shall be guilty of a misdemeanor.

II. Any person who uses a pistol cane or sword cane on another person with intent to commit a crime punishable as a felony shall be guilty of a class B felony.

III. Neither the whole nor any part of a sentence of imprisonment imposed for a violation of this section shall be served concurrently with any other term of imprisonment.

I. “Martial arts weapon” means any kind of sword, knife, spear, throwing star, throwing dart, or nunchaku or any other object designed for use in the martial arts which is capable of being used as a lethal or dangerous weapon.

II. Any person who shall sell, deliver, or otherwise transfer any martial arts weapon to a person under the age of 18 without first obtaining the written consent of such person’s parent or guardian shall be guilty of a misdemeanor.

III. Paragraph II shall not apply to fathers, mothers, guardians, administrators or executors who give a martial arts weapon to their children or wards or to heirs to an estate.

II. Upon the effective date of this section, all municipal ordinances and regulations not authorized under paragraph I relative to the sale, purchase, ownership, use, possession, transportation, licensing, permitting, taxation, or other matter pertaining to firearms, firearm components, ammunition, firearms supplies, or knives shall be null and void.