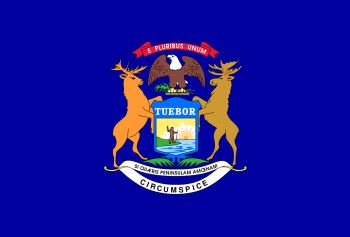 Michigan knife laws all around are surprisingly solid and easy to follow, with a couple of standout exceptions being restricted concealed carry of fixed blade knives. Open carry of fixed blades are permissible, but I would advise most of our readers to do so with great care.

But things aren’t all bad in Michigan, where concealed carry a folding knife is legal, so you don’t have too much to worry about when it comes to carrying your favorite folding pocket knife.

There is also more to celebrate, as Michigan’s knife law statutes have seen continual reform and improvement for a few years now, starting with a big mouth of legislation back in 2017 that legalized the sale and ownership assisted open knives.

Prior to the passage of this reform assisted-opening knives were lumped in with switchblades. First, a little bit of need-to-know info and then we’ll get on to the bulk of the discussion.

Michigan does not have any major restrictions on the general ownership of any particular kind of knife, so as I mentioned above carrying those knives is another story.

But as with all states that have restrictive language in their statutes covering citizen carry of weaponry, you must always be extremely cautious lest you run afoul some overzealous law enforcer. You might be able to prove your innocence in court, but you will still have to go to court!

Carry, be it open or concealed, is where the fun begins in Michigan. In an odd turn, it seems that Michigan doesn’t really care what you carry openly so long as you do not carry it with any unlawful intent.

The law specifically states that any person may not go armed with the following with any intent to use it unlawfully against another person: daggers, dirks, razors, stilettos or any knife having a blade of over 3 in. in length, or any other dangerous or deadly weapon or instrument.

That sure sounds at first blush like a total restriction on open carry of any knife with a blade over 3 in., doesn’t it?

That is understandable, but a thorough reading of the law says a person must not go armed with any of those knives with the intention to use them on lawfully against any other person.

That means if you are going forth armed with no intent to use them on lawfully, you are not breaking the law.

Now, concealed carry is an entirely different thing. In the state of Michigan, a person shall not carry any dagger, dirk, stiletto or double edged non-folding stabbing instrument of any links, or any other dangerous weapon, except a hunting knife adapted for the purposes of the relevant statute.

Carrying any of the above on your person or in your vehicle counts as carrying concealed, unless you’re in your house, your place of business, or any other land that you may own.

The relevant section seems to be predisposed against the specialized knives named and also fixed blade knives, which are expressly forbidden, but the inclusion of the phrase “any other dangerous weapon” might make certain folding knives, especially of the tactical variety, verboten as well.

Any folding knife that might be classified under the broad category of dagger, dirk or stiletto is probably going to get you in trouble, so leave the super killy and vicious looking knives at home. A more pedestrian, typical pocket knife is probably your best bet.

You have been warned: of particular interest to preppers going armed in the state of Michigan, concealed carry of any prohibited weapon is a big deal in the state, a felony, and the sentence can be up to five years in prison or a significant fine of $2,500.

That there is no provision for leaving a knife in your car in the parking lot in the state of Michigan if you are not a student (or are a student, for that matter) but there is one for firearms.

Just because there is one for firearms does not mean knives fall under that umbrella; they don’t. Words mean things, and Michigan knows what they are about when they exclude knives from that statue.

Also be aware that Michigan has no statewide preemption, meaning that counties and cities might have their own laws governing knives that are not overridden by the statewide law.

That means it is up to you to remain completely up-to-date on the weapons laws and whatever area you are living in, working in or traveling through. Ignorance is no excuse!

Despite their obvious and peculiar hatred for the carry of fixed blade knives, Michigan is otherwise a fairly friendly and permissible state for knife owners.

Not having statewide preemption to unify the local laws throughout is a bit of a pain, and can make navigating the legal landscape complicated depending on what kind of knife you are carrying.

Hopefully the progress being made to modernize the states knife law will continue and soon all of this will be a worry of the past.

750.226 Firearm or dangerous or deadly weapon or instrument; carrying with unlawful intent; violation as felony; penalty.

(1) A person shall not, with intent to use the same unlawfully against the person of another, go armed with a pistol or other firearm, or a pneumatic gun, dagger, dirk, razor, stiletto, or knife having a blade over 3 inches in length, or any other dangerous or deadly weapon or instrument.

(2) A person who violates this section is guilty of a felony punishable by imprisonment for not more than 5 years or a fine of not more than $2,500.00.

(1) A person shall not carry a dagger, dirk, stiletto, a double-edged nonfolding stabbing instrument of any length, or any other dangerous weapon, except a hunting knife adapted and carried as such, concealed on or about his or her person, or whether concealed or otherwise in any vehicle operated or occupied by the person, except in his or her dwelling house, place of business or on other land possessed by the person.

(3) A person who violates this section is guilty of a felony, punishable by imprisonment for not more than 5 years, or by a fine of not more than $2,500.00.

750.235b Threatening to commit violence with firearm, explosive, or other dangerous weapon against students or employees on school property; specific intent or overt act; violation arising out of same transaction; definitions.

(1) A person who verbally, through the use of an electronic device or system, or through other means intentionally threatens to use a firearm, explosive, or other dangerous weapon to commit an act of violence against any students or school employees on school grounds or school property if the threat can be reasonably interpreted to be harmful or adverse to human life, or dangerous to human life as that term is defined in section 543b, is guilty of a misdemeanor punishable by imprisonment for not more than 1 year or a fine of not more than $1,000.00, or both.

(3) This section does not prohibit a person from being charged with, convicted of, or punished for any other violation of law arising out of the same transaction as the violation of this section.

(4) Except as provided in subsection (5), an individual who possesses a weapon in a weapon free school zone is guilty of a misdemeanor punishable by 1 or more of the following: (a) Imprisonment for not more than 93 days. (b) Community service for not more than 100 hours. (c) A fine of not more than $2,000.00.

(5) Subsection (4) does not apply to any of the following:

(c) An individual licensed by this state or another state to carry a concealed weapon.

(f) An individual who is 18 years of age or older who is not a student at the school and who possesses a firearm on school property while transporting a student to or from the school if any of the following apply:

(b) “School” means a public, private, denominational, or parochial school offering developmental kindergarten, kindergarten, or any grade from 1 through 12.

(c) “School property” means a building, playing field, or property used for school purposes to impart instruction to children or used for functions and events sponsored by a school, except a building used primarily for adult education or college extension courses.

(d) “Weapon” includes, but is not limited to, a pneumatic gun.