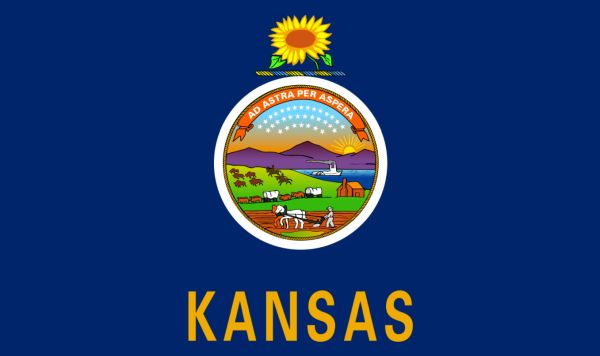 Kansas is something of a pleasant surprise when it comes to knife laws. Following a significant revision of the states statutes in 2012 and 2013, Kansas now has pride of place among the freest states for citizens when it comes to the ownership and carry of knives.

Kansas is a state without any restrictions on blade length, and shows total permissibility when it comes to open or concealed carry and highly permissive regulations concerning where you can and cannot take your knife.

Perhaps the only complaint we can level against Kansas is that they have a blanket ban on throwing stars. That is definitely irritating for collectors, but should not make much difference in practical terms for those who carry a knife for work or for self-defense.

Even though Kansas is nearly do-as-you-please when it comes to the carry of knives, we will still dig into all the relevant statutes below.

There is only one kind of knife that is forbidden from private ownership in the state of Kansas, and that is the throwing star, or shuriken.

You may not possess or carry one openly or concealed. It is unfortunate, and somewhat foolish when you stop to think about it, but that is the way it is.

On the bright side, there is much to be thankful for: aside from that single restriction Kansas is a virtual free-for-all when it comes to the types and lengths of knives you may carry.

Due to the specific way that the Kansas statutes are worded, you are only forbidden from carrying specifically named knives if they are carried with the intent to use them unlawfully against another person.

Included among those specifically named knives are daggers, dirks, straight edge razors, stilettos and any other knife of like character.

Also included is the term “dangerous knife” which, though nebulous and undefined, is not an issue for non-felons who are carrying any such knife without criminal intent, whatever they are!

It is worth noting, and is expanded upon in the included statutes at the end of this article, that throwing stars are also among the knives that are illegal to carry with unlawful intent.

The way that the Kansas statutes are worded at first glance means that one is likely to determine you should be able to carry a throwing star so long as you are not carrying it with unlawful intent.

Unfortunately, the statutes later classify a throwing star as something other than a knife.

You can carry concealed any type of legal knife in the state of Kansas lacking a permit with no problems.

There is no talk of any bladed instrument save for throwing stars being overtly criminal depending upon its mode of carry. This is definitely a good thing for anyone living or traveling in the state of Kansas.

Having a Kansas concealed weapons permit or any permit recognized by the state of Kansas does not grant any additional permissions regarding the carry of knives; once again you can carry anything you want to, more or less, with or without a permit so long as it is not a throwing star.

Just like concealed carry, open carry is a-okay in Kansas. Any kind of knife, anywhere you are legally allowed to take it, so long as it is not a throwing star.

Schools. Though the way the state statutes are worded is a little unclear in this regard, I would advise you not to carry any bladed implement onto school property or into a school building proper.

At first glance the law looks like it merely forbids any student from carrying a switchblade knife or gravity knife, potentially classified as a butterfly knife, but if there were to be an incident or someone took offense to you carrying your knife onto school grounds you can rest assured the interaction will not end happily for you.

Is a great time to be a citizen or visitor in the great state of Kansas if you are a knife aficionado or just a person who appreciates being able to choose what you’ll carry without any hassle.

Any kind of knife goes in Kansas except throwing stars, and you can carry your knife pretty much anywhere openly or concealed with no permit needed.

Sturdy statewide preemption laws assure citizens that no locality will implement laws that undercut your right to go forth armed with the blade of your choice.

(a) Criminal use of weapons is knowingly:

(2) possessing with intent to use the same unlawfully against another, a dagger, dirk, billy, blackjack, slungshot, dangerous knife, straight-edged razor, throwing star, stiletto or any other dangerous or deadly weapon or instrument of like character;

(4) possessing any device or attachment of any kind designed, used or intended for use in suppressing the report of any firearm;

(5) selling, manufacturing, purchasing or possessing a shotgun with a barrel less than 18 inches in length, or any firearm designed to discharge or capable of discharging automatically more than once by a single function of the trigger, whether the person knows or has reason to know the length of the barrel or that the firearm is designed or capable of discharging automatically;

(7) selling, giving or otherwise transferring any firearm with a barrel less than 12 inches long to any person under 18 years of age whether the person knows or has reason to know the length of the barrel;

(8) selling, giving or otherwise transferring any firearms to any person who is both addicted to and an unlawful user of a controlled substance;

(17) possessing any firearm by a person while such person is subject to a court order that:

(C) (i) includes a finding that such person represents a credible threat to the physical safety of such intimate partner or child; or

(ii) by its terms explicitly prohibits the use, attempted use or threatened use of physical force against such intimate partner or child that would reasonably be expected to cause bodily injury; or

(18) possessing any firearm by a person who, within the preceding five years, has been convicted of a misdemeanor for a domestic violence offense, or a misdemeanor under a law of another jurisdiction which is substantially the same as such misdemeanor offense.

(b) Criminal use of weapons as defined in:

(A) Class A nonperson misdemeanor except as provided in subsection (b)(5)(B);

(B) severity level 8, nonperson felony upon a second or subsequent conviction.

(m) As used in this section, “throwing star” means any instrument, without handles, consisting of a metal plate having three or more radiating points with one or more sharp edges and designed in the shape of a polygon, trefoil, cross, star, diamond or other geometric shape, manufactured for use as a weapon for throwing.

(a) Criminal carrying of a weapon is knowingly carrying:

(2) concealed on one’s person, a billy, blackjack, slungshot or any other dangerous or deadly weapon or instrument of like character;

(3) on one’s person or in any land, water or air vehicle, with intent to use the same unlawfully, a tear gas or smoke bomb or projector or any object containing a noxious liquid, gas or substance; or

(4) any pistol, revolver or other firearm concealed on one’s person if such person is under 21 years of age, except when on such person’s land or in such person’s abode or fixed place of business; or

(b) Criminal carrying of a weapon as defined in:

(a) A municipality shall not enact or enforce any ordinance, resolution, regulation or tax relating to the transportation, possession, carrying, sale, transfer, purchase, gift, devise, licensing, registration or use of a knife or knife making components.

(c) Any ordinance, resolution or regulation prohibited by either subsection (a) or (b) that was adopted prior to July 1, 2014, shall be null and void.

(d) No action shall be commenced or prosecuted against any individual for a violation of any ordinance, resolution or regulation that is prohibited by either subsection (a) or (b) and which was adopted prior to July 1, 2014, if such violation occurred on or after July 1, 2013.

(e) As used in this section:

(1) ”Knife” means a cutting instrument and includes a sharpened or pointed blade.