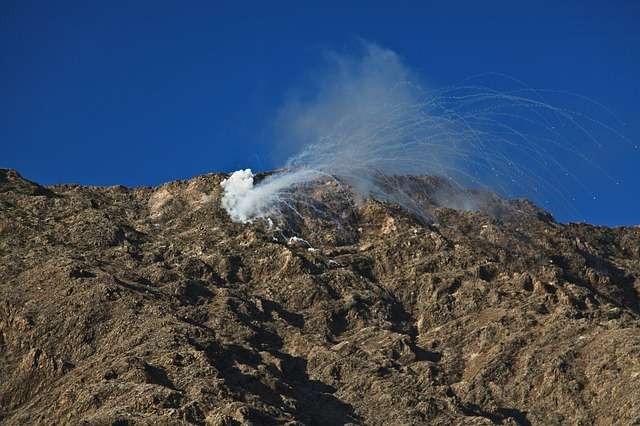 Disclaimer: the advice given in this article is for information purposes only. Before making smoke bombs, check the rules and regulations where you live. Always use protective equipment.

Smoke bombs are a firework-like piece of equipment that, as the name suggests, will produce smoke once they are ignited. They have found a place in the military, with law enforcement, and in paintball or air soft matches. But there’s another place where they will be equally useful, in a survival or disaster situation.

HOW WILL SMOKE BOMBS SAVE YOUR LIFE IN A SURVIVAL OR DISASTER SITUATION?

Before we dive into the different methods to make smoke bombs, it’s important that we first run down the various instances where they could save your life. This way you’ll understand why they are a necessary component of a disaster or survival plan, and you’ll also feel more motivated to make them using the methods that we will discuss later on.

In a wilderness situation, if you are lost or in trouble and need to be visible, smoke bombs that are colored can also signal for help. Red and yellow colored smoke bombs work best for this scenario because they also stand out the best against the natural colors of the wilderness.

In a grid down scenario, looters and raiders will be a major threat in both urban and suburban areas.  One of the best defenses you can have to protecting your home, assuming you chosen to bug in rather than bug out, is to convey the sense that your house is not worth taking. Black colored smoke bombs from within your house can create the impression that your home is on fire, and any burglars or raiders will hopefully move on to the next home.

The next scenario for how a smoke bomb could save your life is probably the one that you had in mind all along: it temporarily hides you from being a target. Even though smoke bombs will produce their smoke for only one to four minutes at the most, just a couple of them is enough to screen an area and allow you to find cover or make a daring escape.

Smoke bombs are an incredibly valuable survival item and these are just three of the survival scenarios where they can save your life. You should absolutely have at least two or three of them in your survival pack, your bug out bag, and your home survival kit.

But do you know how to make smoke bombs on your own with completely ordinary products that we take for granted? If not, the next three methods will teach you how you can.

Now that we have learned why smoke bombs are important and how they can save your life, we can start to talk about how to make them. Our first method is the Potassium Nitrate, Corn Syrup and Sugar method.

All of the above items you should either already have or have easy access to buy at stores prior to a post-SHTF event. You can also use substitutes for some of these things. For example, instead of cane sugar, you can use regular sugar if necessary. Or if you don’t have potassium nitrate available, hi-yield stump remover has over ninety-nine percent potassium nitrate in it.  Light corn syrup can also be used in place of dark corn syrup.

That’s it! Assuming you used all of the right ingredients and followed the directions correctly, you now have a smoke bomb that will produce dark smoke when lighted. Dark smoke is almost always better than white smoke for survival/disaster purposes, which is why the dark corn syrup and cane sugar are recommended.

This smoke bomb will burn very violently after it has caught fire, so when testing it out, make sure that you do in a place where it will not start a fire for safety purposes. In addition, this smoke bomb must be stored in a dry location or else it will not work right when you need it to.

Yes, you really can make a DIY smoke bomb that works effectively out of little more than ping pong balls. It will produce whatever color of smoke that your ping pong balls are.  Let’s see how you can:

To visually see how to make smoke bombs out of ping pong balls, check out this

THE COLD PACK AND NEWSPAPER METHOD

This method of making smoke bombs produces white smoke and can be made with little more than your morning newspapers and the cold packs that you probably already have in your freezer. If you don’t have any cold packs, you can purchase them at most grocery or drug stores

If not much smoke is produced when you light the smoke bomb, the reason why is probably because you added too much water to the bucket.

Remember to exercise caution throughout this process. After you are finished putting the smoke bomb together, wash your hands with soap thoroughly and consider taking a shower to be safe if any gets on the rest of your skin.

A video demonstration of how to make smoke bombs out of newspapers and the ammonium nitrate in cold packs can be found here:

Making smoke bombs out of everyday items is an important skill when it comes to survival and preparedness, but unfortunately it’s also one that many preppers overlook.  Smoke bombs are legal in all fifty states, and so long as you use them safely (avoid testing them near roads or in a public area, for example) you can test them out as much as you want.

In this article you have been taught three different methods for producing homemade smoke bombs out of simple house items that we take for granted on a day to day basis. After you’ve made these smoke bombs, place two or three of them in your bug out bag and your home survival kit, so that they will always be ready for when you need them.  High humidity, heat, and moisture will all decrease the life of your smoke bombs.  For that reason, always store your smoke bombs in cool and dry locations to get the longest shelf life.

As a final note, remember to put safety as your first and foremost concern when making, testing, and storing your smoke bombs. Always wash your hands before and after making your smoke bombs, make sure you follow the steps exactly as we outlined them and have the right materials ready. Never test out your smoke bombs in an area that could easily catch fire.  Have a fire extinguisher handy and consider wearing protective gloves and safety goggles when testing as well.

Once you’ve made and tested your smoke bombs, you can take comfort in knowing that your survival and disaster preparedness skills have just been upped a notch and your chances of survival have increased. Good luck!

1 thought on “How to Make Smoke Bombs”