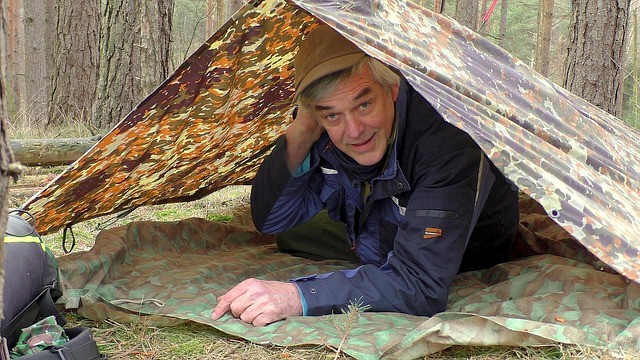 If the SHTF and you find yourself in a situation where you are in need of a temporary shelter, what would you use? Sometimes it isn’t possible to rely on a pre-built shelter or dwelling, so you will need to be creative and able to use whatever resources you can. Or, maybe mobility is a necessity so being able to build quick and move is a factor.

In this article we will look at some popular and useful temporary shelter options for a bug-out-bag, prepping or survival situation. A temporary shelter should provide protection from the elements and a home base to gather resources and sleep, and below are examples of this philosophy.

Canvas shelters include tents, poncho and tarp shelters. These are simple, portable and light options that can be built and moved quickly.

One of the best temporary shelters is a tent. They are portable, simple and light and won’t take up much space in your BOB for modest sized model. If you decide to use a tent, more expensive options can add space for less weight, making a tent and important investment for your bug-out-bag.

One of the best things about a tent is that it can be easily repaired or parted out. If a section tears, some duct tape or stitching can fix it; if a pole snaps a branch or cording can be used; if a section is unusable other parts can be retrofitted in. The rain fly alone has dozens of uses.

A poncho shelter isn’t fancy or comfy, but it will get the job done. It will keep the rain off you while you sleep, the sun off you in the day and add a little bit of warmth. Importantly, it will give you the mental security of having a temporary home base after a relatively simple build.

A poncho shelter has been used in the military for some time as a quick and portable sheltering option. There are a few different ways to make a poncho shelter, but all you need is a large poncho, rope and stake anchors. Tie the rope between two trees and the ends of the poncho onto the rope. The other end is then staked into the ground with the hooded section in the middle. One side will be open, but it’s enough to keep you dry and free of sunburn in a pinch.

A tarp shelter is the next step up from a poncho shelter and looks a little more like a tent. Like the poncho shelter, it won’t offer much in terms of warmth and comfort, but it will keep the rain from soaking you completely and the sun off your back.

To make a tarp shelter all you need is a tarp, cordage and some sticks for stakes. You can also add extra support by building a small a-frame around the tarp.

A tarp shelter is made by tying two cords between trees and hanging the tarp in the middle. From here, drape the tarp over the cord line and use stick to anchor the tarp down. I carry a tarp in my pack that has grommets and use these to anchor the stakes. You can also make small cord loops and tie one end into a grommet and another on the stake.

You can also make an a-frame by putting a straight branch into a y-shaped branch and tying it together. After this, you can attach this to the middle of your tarp shelter to add a bit more stability against the wind. I’ve also seen people use Mylar blankets on the inside of this type of shelter to add a little extra insulation.

In a pinch, there are natural shelter options that can be used. Sometimes gear will fail or maybe get separated, so these are good options to keep in mind.

A lean-to is similar to a tarp shelter but uses branches and leaves instead of tarp and rope. There are two basic types of lean-to, tree-supported and free standing.

As the name suggests, a tree-supported lean-to anchors off of a tree. This means there are less pieces involved in the build, but still the necessity to anchor a second branch into the ground. Between the two supports, a crossbeam is hung and tied, and then branches and leaves are rested and tied onto the crossbeam to make up the “roof” of the lean-to.

The free standing version does not use the support of a tree and has either a square or triangular opening. The square version uses two support branches and a crossbeam while the triangular version uses one branch and support beams making a triangle to the sides. The triangular lean-to is sometimes called an a-frame shelter.

A dug-out shelter is another military inspired shelter. A dug out shelter can be as simple as digging a hole, reinforcing the walls and adding a roof. The roof can be a tarp or a branches and leaves roof.

While a dug out shelter takes more time to build than a tarp shelter or lean-to, it has added benefits in terms of warmth, protection and size, as it can be as big as time or resources allow. While it is good as a temporary shelter, a dug-out shelter can be added onto make it a longer term option.

How to Build A Wilderness Survival Shelter, Dugout Shelter

If you are moving fast and don’t have time to erect a shelter sometimes nature can provide one. Deep caves aren’t always the best option because they can be the home of wild animals, but a shallow cave or rock overhang would work well. Other times, the natural root structure of a fallen tree can be used, just make sure the tree is in stable position.

In an urban environment, manmade shelters include different options. If evacuating an urban area, a car will most likely be a temporary shelter option, but abandoned houses, industrial complexes and shipping container can also be used.

A large shipping container has been used by preppers as a sheltering option for years. Large, sturdy and able to be locked, a shipping container can be a temporary shelter used as you evacuate or move out of an urban area. Because they are used in industry, there is also a chance to find them around abandoned industrial areas.

Like a tent, a car can be the easiest temporary sheltering option. If you are lost in the woods or attempting to evacuate an urban area, you will likely have access to a car. In a survival situation, a car can be deconstructed and used for lots of different scenarios. If you want mobility though, remember to bring lots of extra fuel!

This is a sheltering idea where the saying “one man’s trash is another man’s treasure” is literally true. Using cardboard and cardboard boxes is a sheltering option that has been used by the homeless in many urban environments and can be used as a temporary shelter. By building a little foundation and roof and using duct tape or rope cording, a stable and dry shelter can be built.

Look for retail or industrial areas where large boxes will be discarded. Sometimes they can be quite large and thick, meaning they will keep out the elements and retain some heat. In the above video, a prepper built a cardboard house and it survived heavy rains and stayed intact for almost a month.

It isn’t pretty, but if everything else fails and you’re stuck in an urban environment, a dumpster can do in a pinch. In a survival situation, everything should be considered usable if it it’ll get the job done and allow you to live another day. A dumpster will allow you to stay covered, warm and hidden in the city.

Where to Build a Shelter

Regardless of the situation there are some important factors to consider that pertain to survival. These include:

As part of your survival prepping, it’s important to map out areas around you to go to if you need to bug out. It’s important to have a working knowledge of temporary shelters like these listed above because they can be used in either a bug-out or backcountry survival situations.