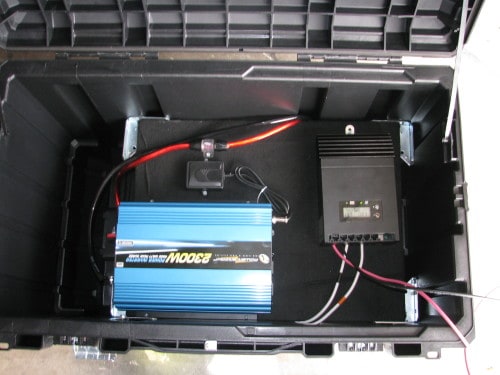 I had been thinking of constructing a portable solar generator for some time. I remember seeing a news story on a local company that was marketing a “new” product.

It was an 1800 watt portable solar generator with a 100 watt solar panel. I will not link their product here, I do not want to give free advertising or any positive or negative endorsement. I wanted to make my “own”, but I liked the idea.

So after contemplating for a while and having gone the “harbor freight” course, I started gathering my items. First I did some research on solar. And the internet is full of information…

At a local store that has a lot of items that they buy in bulk. They buy for instance a wrecked trailer load of whatever (electronics, sporting goods, food items, etc.), they turn around and sell these items to the public at DEEP discounts.

It is kind of a crap shoot on what they have from day to day, but sometimes some good stuff can be gotten for cheap. For example, I was able to buy 2 brand new Universal AGM batteries (12 volt 110 AH) for $80.00 each. Typically these retail at a battery distributor locally for $300.

I found on our local news classifieds, a local contractor that serves the DIY’er, and bought 2 (Chinese) 225 watt polycrystalline panels.

After exhaustive research I had found out that these panels were actually about .7% more efficient due to the entire array being capable of producing power, whereas the monocrystalline types have rounded edges that cut down on overall efficiency. I bout them for $0.89 a watt. $400 for 450 watts of (advertised) capacity.

I also researched the charge controller. I found that there are 2 types. PWM and MPPT. In short the PWM (cheaper by far) controller will only allow the panels to charge at a rate of what the batteries are at, leaving 40-60% wasted as heat.

Conversely the MPPT is a true dc to dc converter. It has intelligent programming that will convert the incoming voltage and amps to a much higher rate (95-98% advertised by all manufacturers).

The controller is capable of 30 amps and 150 VDC. The panels at OCV put out 37 VDC and 8.2 A at short circuit. Thus I am able to series wire the panel giving me theoretically 60 VDC and 8 amp charge rate.

Thus vastly increasing the performance of the panels and charge rate and capacity. Plus the controller can charge in bulk, absorb and float modes. The MPPT I bought, was off eBay from a seller with 100% positive feedback, for $176 shipped for free. (It arrived in 2 days actually)!

I ordered a Power Bright 2300 watt Modified sine wave inverter from Lowes. $247.32 after tax. It is a nifty unit. It comes with a remote for on and off, and it comes with the cables and connectors (already connected at the factory on both ends of the cables).

(No, I can’t run a refrigerator or a motor off of it, to me that is not important right now. A true sine wave inverter the same size goes for a few hundred more if I remember correctly.)

I bought a Husky roll around tool box from Home depot for $64. (Picture 1)

I placed the batteries inside the compartment on the wheel side. (picture 2)

I needed a panel to mount the inverter and charge controller to. I had a 2’ by 16” ½” particle board from a past project, and some felt. So I took some adhesive spray and covered the particle board. (pic 4)

Then test fit the board and located the mounting positions for the braces I got from Home depot and drilled a hole for the 1/4” hardware. (pic 5)

I then fit the board into place. I did not screw the board to the braces, I want to be able to remove the board to access the batteries. (pic 6)

I then mounted the MPPT, and attached the #6 AWG to the charge controller. (Yes I know both leads are white, I used colored tape to identify the polarity. (pic 8) (pic 9)

I bought 50’, 25’ for the positive and negative. I figured when we go camping, we would be in the shade but the panels could be located 25’ away in the sun, while we were in the shade. (pic 10)

I hooked up the panels in series (+ to – between the panels the + and – to the controller).

On an over cast day in maybe 15 minutes. I admit nothing was running. The inverter was off and there was no load.

So for $1136 I made my own generator. I have 4 times the solar wattage and twice the battery capacity of other manufactured ones. I also admit I got deep discounts on some items like the batteries.

[Rourke: Great job and thanks for sharing!!!!]

We will not spam you.
Print
10.5K
Shares

Review: Xiaomi 16000mAh Mobile Power Bank
So How Long Will My Propane Last?
The Best Rechargeable Batteries for Survival