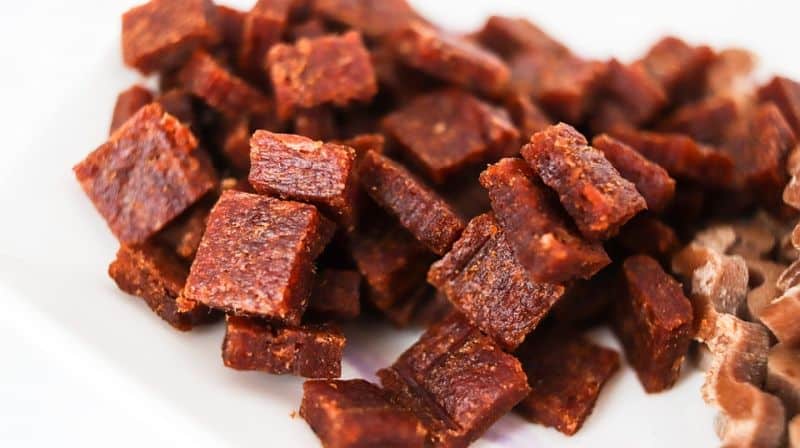 If you get into a jam during a survival situation, and are facing a major calorie deficit to say nothing of legitimate starvation, you might have to broaden your menu a little bit.

If you are lucky, you’ll be able to procure some wild game or even some nutritious, edible plants. In case you can’t, you’ll have to improvise and one commonly available source of calories that is often overlooked is dog food.

Is it okay to eat dog food in an emergency? Generally, yes, but eating it does entail a certain amount of risk. Dog food is not nutritionally complete, and lacks several essential vitamins required by humans. Still, it provides a considerable amount of calories: protein, fats and plenty of other vitamins and minerals. But dog food often contains highly questionable ingredients, and is often contaminated with harmful bacteria right out of the can.

That being said, when the situation looks grim and there is no other readily available source of calories, dog food might be the first and only thing on the menu.

That being said, if you have any choice or influence over the matter you should try to find something else more suited to human consumption. In the remainder of this article we will delve further into the details of dog food as an emergency ration.

Let’s face it; calories are nothing more than fuel, fuel that is absolutely required for sustaining and maintaining vital bodily processes.

If you are low on energy and starting to fade out mentally and physically, you can eat dog food knowing that it will definitely provide the calorie intake and general nutrition required to put more gas in your tank.

What’s more, these calories come from ingredients that are pretty much staples in most human diets, things like animal proteins, animal fats, different kinds of grains, and also added vitamins and minerals. You might even find eggs, vegetables, and other nutritious ingredients in dog food.

Dog food is typically fortified for the same reason that human food is fortified, in order to ensure that a working body is getting everything it needs for good health.

However, just because you and your dog are both mammals, and both have broadly similar biology that does not mean you have identical biology. Your dog is capable of eating things (with relish) that would turn your stomach or make you gravely sick.

Unfortunately, several of these ingredients are found in dog food. The very dog food that you are now considering eating…

I won’t beat around the bush: the animal protein in typical dog food comes from what is charitably called “animal byproducts”.

In layman’s terms, these are the parts of the animal that most people will not or cannot eat. This includes pretty much all organ meats, including the brain and the hide, as well as blood and bones of the animal contained therein.

On that note, the flavor of the dog food on the can is not necessarily the actual kind of meat contained within. Dog food often has flavorings, colorings and other undesirable additives included to make it more appealing to Fido.

That’s okay, you might be thinking to yourself. Lots of cultures around the world eat parts of animals safely and routinely that westerners wouldn’t dream of. How bad can it be? Well, don’t say I didn’t warn you because it gets worse from here.

The standards for ingredients going into dog food as well as the standards of care for the ingredients and the production are far, far lower than they are for food being produced for human consumption.

Preservatives, chemicals and flavor enhancers that would never pass muster for human food are routinely included in dog food and found in abundance.

The condition of the animals providing the protein that goes into the dog food is also often drastically worse.

Animals that have been chemically euthanized or died of hideous diseases including cancer and other parasitic conditions are often ground up right alongside the good ones, processed into raw protein slurry for dog food production.

Fecal matter also goes into the mix as well, either through accident or a total lack of care. I don’t know about you, but I don’t want to eat cancerous flesh or animal turds under any circumstances, and I definitely don’t want my dog to eat it!

How about the parts of the animals that humans not only won’t eat but cannot eat? How about parts like the hooves, udders, horns, bones and so forth? How about blood or blood meal? Yes sir, it is all in there, much of the time.

You can also expect to find completely outrageous ingredients or additives in dog food from time to time, including ground up plastic, chemical bulking agents and other such trickery that unscrupulous companies both domestically and abroad will put in in order to increase profit margins, confound inspectors and meet weight quotas.

Okay so it doesn’t take a genius to see that the nasty ingredients that are typically omnipresent in dog food are unappetizing, and downright disgusting.

Since dogs are scavengers, and their biology reflects this, your dog will happily and contentedly chow down on almost anything out in nature, including rotting corpses (it’s true) and that can of dog food is probably a kingly meal to him.

Dogs in general are less vulnerable to the types of bacteria that would make most humans gravely ill thanks to their short digestive tracts. Our long digestive tracts do not fare well when exposed to the same pathogens.

Generally, most healthy adults can eat dog food with few ill effects most of the time. Assuming you do not get so grossed out you vomit as a matter of course, you won’t necessarily get sick from eating dog food.

The same cannot be said, however, for anyone who is already ill or is suffering from an immune system-compromising disease or condition, or is weakened from exertion or lack of proper nutrition.

To be perfectly clear, just because you are totally healthy does not mean you won’t get sick if you eat dog food; it is just less likely owing to your stronger constitution.

Another, secondary hazard attendant with dog food, especially wet dog food, is that you are unlikely to detect any serious spoilage unless it is way too late because it already smells unappealing and looks even worse.

Most people can easily detect significant spoilage in human food on smell or sight to say nothing of taste. You will not enjoy the same advantage if you are forced to chow down on some puppy chow.

Dry dog food is generally considered more palatable than wet dog food, which is not something that should be underestimated, but regrettably the ingredients in both wet and dry dog food are largely the same, the dry dog food typically includes more grains by volume and additional binding agents.

If you have a choice between the two, I would recommend you go with dry dog food for no other reason then I’ll be easier to eat without throwing up.

As disgusting as it sounds, dog food is edible in an emergency situation, and will reliably supply you with plenty of calories from protein as well as carbohydrates.

However, dog food is lacking in a few human essential vitamins and minerals that dogs do not require, and so long-term consumption will lead to malnutrition unless you are supplementing with other foods.

Dog food is probably no one’s first choice, but so long as you are otherwise healthy it is a viable option for an emergency food.