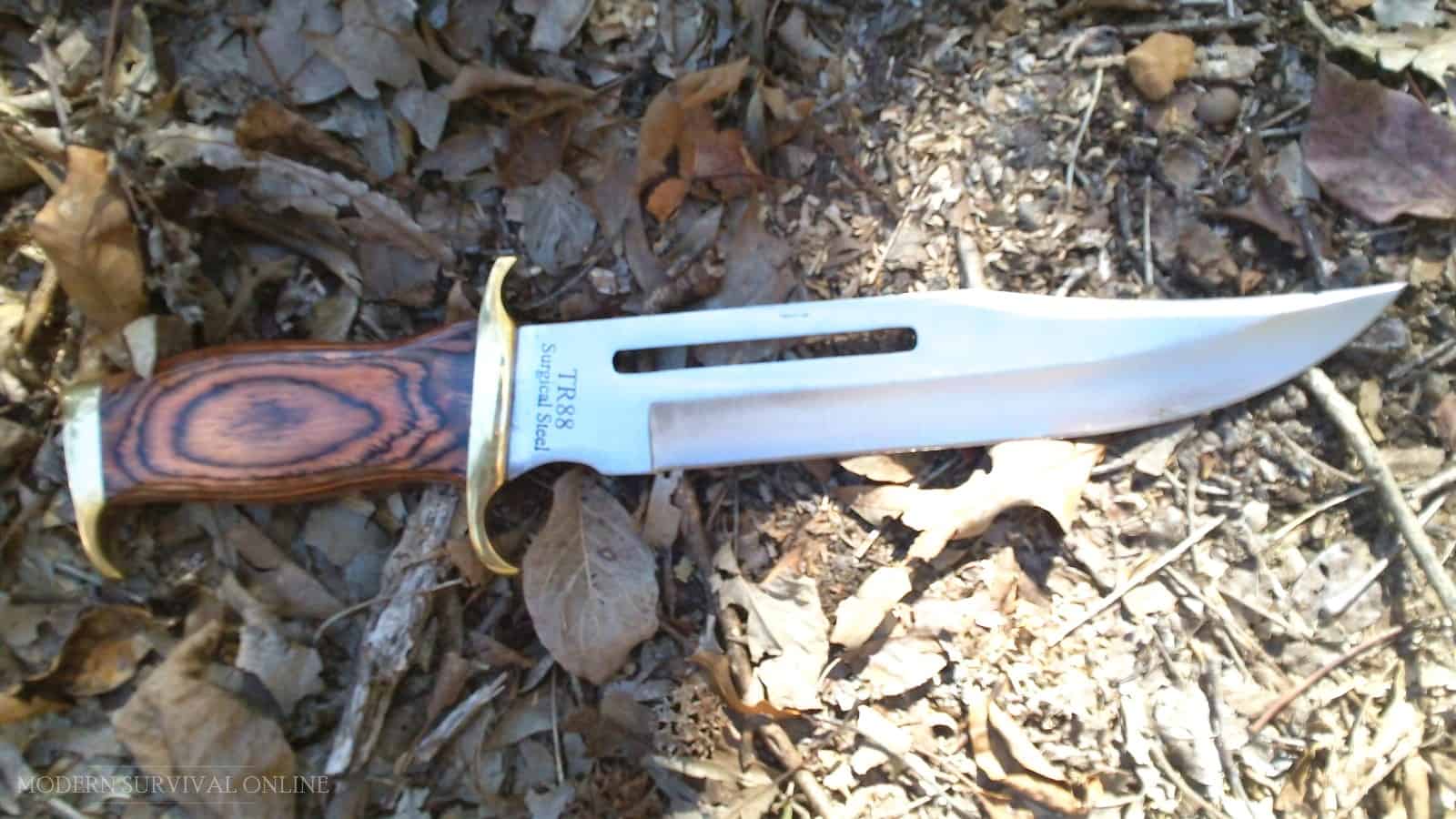 There isn’t a single prepper out there worth their salt that needs to be told the value of a good knife. Know how to handle it, keep it close and just as importantly keep it sharp.

Sharpening is an essential part of knife maintenance, as a sharp knife not only cuts more cleanly and with less force, but it is accordingly safer to handle because of it. Some knife owners are more proactive about sharpening than others, however, and others still sharpen habitually.

But this brings up a good question: is it possible to wear down the blade of your knife over time by sharpening it?

Yes, the blade of any knife will be worn down gradually over time through the sharpening process. Sharpening removes metal from the edge of the knife to produce the fine edge that is capable of cutting easily and cleanly.

A knife that has been sharpened many times over the years will be noticeably shorter from edge to spine then the same knife new and out of the box.

Not a pleasant thing to think about, considering that sharpening the tool we probably love is actually contributing towards using it up.

But not to worry, as proper sharpening and periodic touch up honing done with a skilled hand and the right tools will dramatically reduce the amount of material that needs to come off of the blade in order to produce that hair-popping edge. We will talk a little bit more about this below.

The Sharpening Process Works by Removing Steel from the Blade

When you sharpen your knife by any means you are removing metal from the blade.

Whatever you use, be it a natural water stone or whetstone, a ceramic sharpening rod, fine metal file or something else you’ll be taking off a little bit of metal or a lot depending.

All you need to do in order to see the evidence is look upon your sharpening device. That silvery, grayish material that is left behind when the task is done used to be part of your knife. These fine cuttings, called swarf, are what came off when you were putting blade to sharpener.

Even though the process is so incremental, even with aggressive sharpening devices, you won’t really notice it happening you can definitely see the reduction in material on the blade over time.

In fact, you might be able to check out your grandfather’s favorite pocket knife or perhaps one belonging to a neighbor that has been sharpened over a long life of hard use. The profile of the blade might look a little bit like a fillet knife it has been so whittled down!

It is for this reason that you use sharpening tools appropriate to the task of getting the edge back into working condition and also use good technique so you do not remove any more material that is necessary.

If you have performed even a cursory search for knife sharpening tools you have probably already been blindsided by the sheer variety that is out there on the market.

Various materials, various grits, powered, manual, a dizzying array of devices that can help get your knife back in tip top shape!

You might be surprised to learn, however, that most devices rated for knife sharpening don’t feel rough to the touch.

That is because so little material needs to be removed from an edge that is in reasonably good shape in order to restore cutting performance.

You should note that anything you might use for the task that does feel rough to the touch or visibly removes flakes or grains of metal from the knife should be considered extraordinarily aggressive and used only when you have no other choice or for reprofiling a badly abused or neglected knife.

Things like sandpaper, diamond hones, typical metal files and so forth will rapidly remove metal from the blade as will any power sharper.

Other knife sharpeners that feel smooth or even a slick to the touch such as whetstones and ceramic rods might still be capable of removing considerable material but nothing like the tools mentioned above.

Overuse of any sharpening tool but particularly the aggressive ones will rapidly degrade the life of your blade.

The other half of the sharpening equation is your technique. Using excessive force or way too many passes on or with the sharpener will remove more metal than is necessary to achieve the desired result, accelerating the death of your blade.

Similarly, too much time on a powered sharpening system will do the same thing, only exponentially worse owing to how quickly these devices work.

Another shortcoming you must be aware of when using power sharpeners is heat buildup. These devices, no matter what kind, generate considerable friction, and if not used cautiously with an eye for allowing the blade to cool it is possible to damage or ruin the temper of the knife.

In any case, you’ll need to pay close attention, get instruction on and practice with your chosen sharpening system so you don’t mess up your favorite knife. As always, skill and technique matters and the solution for making up for a lack of result is rarely to go faster and harder until it is attained.

Learn When a Knife Needs Only a Touchup

Not all sharpening jobs are equal. Not every knife needs to be reprofiled from point to tang in order to get it Sharp and cutting properly again.

Most of the time a knife that is not neglected or abused will only need a cursory sharpening or some light honing to restore performance. In such cases, it is entirely possible to go overboard and over sharpen your knife, removing far more material from the blade than is necessary.

Although every knife aficionado has their own standards and their own processes, you can generally break down sharpening into two varieties for typical users.

For a regular touch up of your everyday carry knife that you use for various chores, what you are really probably doing is honing the edge, which is nothing more than a quick repair of an edge that is in otherwise good shape and not cutting normally.

However, a knife that is in rough shape, has been used heavily or is abused and requires the attention of various sharpening tools in various grits or has substantial nicks in the edge needs restoration, a proper sharpening.

In either case, material will be removed from the blade, but it is in the latter case that significant material will be sacrificed in order to restore the edge to working shape. If it helps, you might think of honing as a very light sharpening job.

The reason that honing can restore an edge to serious sharpness while removing very little metal in the bargain is because it only works to realign the very apex of the edge, what is it called the burr.

When a knife is used, this incredibly fine part of the edge is bent or rolled over so that it does not make proper contact with the object being cut.

You’ll know this has occurred when you need to start using a little more force than you would normally to cut a given object. Honing in essence stands this burr back up and presents the thinnest possible profile to the object being cut.

It is possible to wear down the blade of a knife by sharpening it, and even when sharpening is done correctly to the letter material from the blade is still lost.

This is considered part of normal wear and tear on a knife, but it is possible to greatly accelerate where on a blade by sharpening improperly or with tools that are too aggressive for the task. You can easily maximize blade life by using proper sharpening devices and correct technique.

1 thought on “Can a Knife’s Blade Wear Down in Time from Sharpening?”