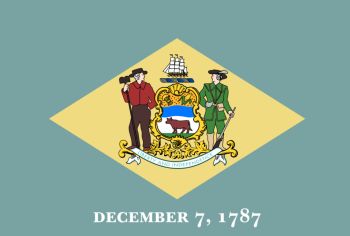 Delaware is a state of contrasts when it comes to knife laws, though you might find it one of the more permissive New England states in spite of a variety of restrictions.

So far so good, but there are blanket restrictions on switchblades, butterfly knives, gravity knives, any knife with an integral knuckle handguard, throwing stars or shuriken, and any knife that is undetectable, classified as made from a non-metallic material that can escape detection by handheld or installed metal detectors.

We will dig into all the details and the remainder of this article so you can stay safe and stay legal while carrying a knife in Delaware.

Delaware specifically bans entire categories of knives, though the restrictions include both specific features, and certain classes of knife.

Specifically banned types of knife include any switchblade, any non-detectable knife defined as a knife which is made from material other than metal, any shuriken or throwing star, any gravity knife, any butterfly knife, and any knife with an integrated knuckleduster handguard, though the statutes are unclear as to whether or not a knife with a continuous, open D-shaped handguard would qualify.

Also note that the state statutes classify a deadly weapon as any kind of knife except an ordinary folding pocket knife. The exact verbiage of the statute, “ordinary pocket knife”, is defined as any folding knife with a blade measuring less than three inches.

This is a fairly restrictive statute when it comes to length, as quite a few knives that are otherwise completely pedestrian have blades measuring at least that long. Take great care when choosing a pocket knife to carry in Delaware!

You must be sure you are on the right side of the law in Delaware, since the illegal possession of any deadly weapon is categorized as a felony.

Also, there is no statewide preemption in the state of Delaware; local laws might well be more restrictive than the state laws and you must abide by them if you are living or traveling in such places.

The only kind of knife that is legal to carry concealed without a concealed weapons permit in the state is an “ordinary pocket knife”, defined above and in the state statutes as any folding knife that has a blade measuring less than 3 inches. Small gentleman’s knives, trappers, scout knives and related utility knives will all fit the bill so long as they are compact enough.

There is no other provision for the concealed carry of a knife without a permit unless one is a law enforcement officer, or some other official engaged in official duties.

Note that Delaware makes firearms training a mandatory part of obtaining their concealed weapons permit in the state, and even if you only plan on carrying your knife and nothing but your knife you will still have to attend formalized handgun training and pass the course in order to be issued the permit. It doesn’t make a lot of sense, but then again anything governments do rarely makes sense.

Open carry of all permitted types of knives is allowed in Delaware so long as you are not carrying anywhere that you may not have a knife. See below.

Any school defined as a “safe school or recreation zone”. The definition includes any building, sports field, stadium or any other kind of property that is owned, rented, operated or otherwise controlled by a public or private school.

You also may not carry within 1,000 feet of any said property. The definition of “safe school or recreation zone” also includes any motor vehicle similarly owned or operated by any public or private school.

Included in this definition, and specifically referring to “recreation zone” is any building or structure that is owned or operated by the state or any corporation or any private organization, and is used as a center for recreation, athletics, or as a stadium.

Be on your guard: Delaware has a specific state statute declaring that it shall be no defense against prosecution for violating the illegal carry of weapons on school property statute that the person who committed the violation was unaware they were on such a property. You have been warned!

Delaware is a reasonably permissive state when it comes to ownership and carry of knives, at least as far as New England states go.

Though some specific categories of knife are banned, you have broad latitude regarding what you can carry and how long it is so long as you are carrying it openly or are carrying it concealed and have in your possession a valid concealed weapons permit.

Lacking such a permit, the only knife you can carry without breaking the law, if you’re going to carry it concealed, is one with a blade measuring less than 3 inches.

Understanding the law as it is written and interpreted is essential for ensuring you don’t run afoul of it. Delaware’s statutes governing knives are intricate and extremely verbose, but I am including the most relevant ones here, below.

Make sure you take the time to read and understand all of them,, and consult an experienced attorney in Delaware if you have serious questions.

(4) “Dangerous instrument” means any instrument, article or substance which, under the circumstances in which it is used, attempted to be used or threatened to be used, is readily capable of causing death or serious physical injury, or any disabling chemical spray, as defined in paragraph (7) of this section or any electronic control devices including but not limited to a neuromuscular incapacitation device designed to incapacitate a person.

(5) “Deadly weapon” includes a “firearm”, as defined in paragraph (12) of this section, a bomb, a knife of any sort (other than an ordinary pocketknife carried in a closed position), switchblade knife, billy, blackjack, bludgeon, metal knuckles, slingshot, razor, bicycle chain or ice pick or any “dangerous instrument”, as defined in paragraph (4) of this section, which is used, or attempted to be used, to cause death or serious physical injury. For the purpose of this definition, an ordinary pocketknife shall be a folding knife having a blade not more than 3 inches in length.

(22) “Physical force” means any application of force upon or toward the body of another person.

It shall be a defense that the defendant has been issued an otherwise valid license to carry a concealed deadly weapon pursuant to terms of § 1441 of this title, where:

(1) The license has expired,

(2) The person had applied for renewal of said license within the allotted time frame prior to expiration of the license, and

(3) The offense is alleged to have occurred while the application for renewal of said license was pending before the court.

(c) For the purposes of this section, disabling chemical spray, as defined in § 222 of this title, shall not be considered to be a dangerous instrument.

(d) Carrying a concealed dangerous instrument is a class A misdemeanor.

A person is guilty of unlawfully dealing with a switchblade knife when the person sells, offers for sale or has in possession a knife, the blade of which is released by a spring mechanism or by gravity.

Unlawfully dealing with a switchblade knife is an unclassified misdemeanor.

A person is guilty of unlawfully dealing with a knuckles-combination knife when the person sells, offers for sale or has in possession a knife, the blade of which is supported by a knuckle ring grip handle.

Unlawfully dealing with a knuckles-combination knife is a class B misdemeanor.

A person is guilty of unlawfully dealing with a martial arts throwing star when the person sells, offers for sale or has in possession a sharp metal throwing star.

Unlawfully dealing with a martial arts throwing star is a class B misdemeanor.

(b) Notwithstanding any other provision of law, all knives or other instruments with or without a handguard that are capable of ready use as a stabbing weapon that may inflict serious physical injury or death that are commercially manufactured in this state that utilize materials that are not detectable by a metal detector or magnetometer, shall be manufactured to include permanently installed materials that will ensure they are detectable by a metal detector or magnetometer, either handheld or otherwise, that is set at standard calibration.

Title 11 – Crimes and Criminal Procedure § 1457. Possession of a weapon in a Safe School and Recreation Zone; class D, E, or F felony; class A or B misdemeanor.

(c) For the purpose of this section, “Safe School and Recreation Zone” shall mean:

(1) Any building, structure, athletic field, sports stadium or real property owned, operated, leased or rented by any public or private school including, but not limited to, any kindergarten, elementary, secondary or vocational-technical school or any college or university, within 1,000 feet thereof; or

(2) Any motor vehicle owned, operated, leased or rented by any public or private school including, but not limited to, any kindergarten, elementary, secondary, or vocational-technical school or any college or university; or

(3) Any building or structure owned, operated, leased or rented by any county or municipality, or by the State, or by any board, agency, commission, department, corporation or other entity thereof, or by any private organization, which is utilized as a recreation center, athletic field or sports stadium.

(d) Nothing in this section shall be construed to preclude or otherwise limit a prosecution of or conviction for a violation of this chapter or any other provision of law. A person may be convicted both of the crime of possession of a weapon in a Safe School and Recreation Zone and of the underlying offense as defined elsewhere by the laws of the State.

(e) It shall not be a defense to a prosecution for a violation of this section that the person was unaware that the prohibited conduct took place on or in a Safe School and Recreation Zone.