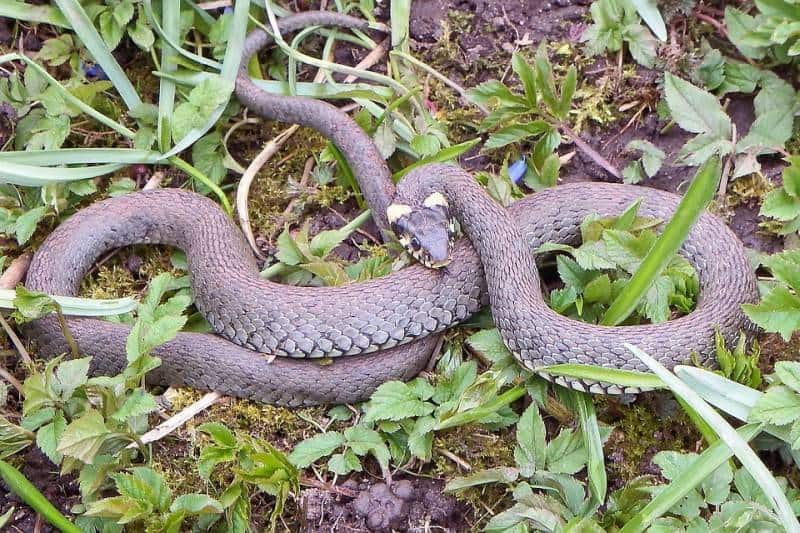 Pretty much anywhere you live in the world you can be assured you’ll eventually run into a snake in your travels. These slithering, cold blooded reptiles give many people the willies and often inspire panic.

What should you do if you run into a snake? In virtually every circumstance your best course of action is just to back away smoothly, but quickly. Never try to handle a snake, and only if the snake presents a definite impediment to movement or an ongoing threat should you attempt to move it out of the way, or dispatch it.

Whether you live in a snake-populated area, and have to deal with them on your homestead or just anticipate running into them regularly in your travels on the trail, you need to have a plan for dealing with snakes. There is quite a bit more to consider, and we will get into it throughout the rest of this article.

They Really Are More Afraid of You

It is clichéd advice, but snakes are almost invariably more afraid of you than you are of them, even if you are seriously snake-phobic!

Smaller creatures, including reptiles like snakes, always have to be cautious that they are not trod upon by larger mammals and that includes humans. The typical behavior of a snake that is threatened or fears being stepped on is to scoot out of the way.

Unless you corner the snake or are dealing with a particularly aggressive snake (either through temperament or some other instinct of self-preservation), you will rarely have to worry about a showdown with one of these creatures.

This is good news because interacting with any snake, even when you think you have positively identified, entails some significant risks.

Should you spot a snake in your way or happen upon one suddenly, you don’t need to scream, shout, and lose your wits. Simply back up away from the snake smoothly but quickly and, as the distance increases, so too does safety.

Spotting the Snake Ahead of Time is Essential

Of course, to avoid a snake you must first detect it and then alter your path accordingly. This might not be the easiest thing in the world to do as many snakes blend in well to their environment, and some employ masterful camouflage that makes them virtually invisible if they aren’t moving.

You must pay attention to where you are putting your feet and what is ahead of you wherever you go if you are in snake country, especially when they are most prone to being out and about or moving.

Going through the world completely oblivious or in “condition white” is a great way to suffer an accident, including a snake bite!

You must also pay attention to where you were putting your hands, as reaching up to grab a branch or an overhead ledge could see you coming far too close to the snake, threatening it or even worse grabbing it directly in which case a bite is all that certain.

This advice is especially crucial whenever there is ground cover or other concealing factors that could help hide a snake or provide it shelter.

Know What Snakes Are in Your Area

You can give yourself an edge if you brush up on what snakes are common in your area. Knowing quite literally what the snake looks like means you’ll be better informed on what to look for, hopefully noticing the snake before it is too late. It will also pay to bone-up on their habits, typical behavior and where encounters are most likely.

For instance if you live in an area where copperheads are common, you’ll know that they are extraordinarily well camouflaged and extremely difficult to detect among the detritus common on forest floors.

To make matters even worse, you would also know that copperheads are notorious for remaining perfectly still and motionless when they feel threatened, this being their primary defensive behavior: simply avoiding notice.

That definitely wouldn’t help you avoid a copperhead for obvious reasons but it would inform you that you need to be especially on alert in copperhead country. Consider also the preponderance of rattlesnakes on the North American continent.

Mature rattlesnakes are generally quite likely to issue their infamous warning “buzz” when they feel threatened, and this auditory signal is intended to help you notice and locate the snake, and then go the other way. Unfortunately, this warning buzz is not guaranteed, so don’t get lazy.

All snakes are cold blooded, and this means they are overwhelmingly dependent upon the climate to regulate their body temperature. Snakes will become more active when the weather is warmer and less active when it is cooler, and clear or partly cloudy weather will see the snakes move more often in order to catch some rays or get into the shade depending on what they require.

Also the season and time of day plays a significant part in a snake’s activity level, with many snakes being more active at dawn or dusk because that is when they’re typical prey items are more active.

You can also depend on running into more snakes in the early days of spring since they will be shaking off the winter chill and on the move more regularly.

Unless you live in a part of the world that simply does not have any snakes, places which are notably few and far between, you can never completely let your guard down.

But you can use your knowledge of endemic snake species along with an informed opinion of their activity levels based on local conditions to drastically decrease your chances of a bad run-in with them.

No Choice: Dealing With a Snake

Despite your best efforts to avoid it, or perhaps because of the snake’s location, you now have no choice but to get rid of it one way or the other.

Maybe it is in the middle of a tight and impassable trail that you cannot detour around, and you certainly cannot risk stepping over it. Perhaps it is too close to the house and is a known venomous or otherwise dangerous snake that could endanger children or pets. What should you do?

If you are in a nature setting such as near your campsite or on the hiking trail one good option is to use a long trekking pole, walking stick or a sturdy branch to gently prod the snake in to hopefully vacating its resting place.

As mentioned above, most snakes are not looking for trouble and are definitely afraid of humans, so with a little luck they will just take off into the underbrush.

If the snake is near your home or some other settlement and you need it gone, permanently, your best bet is to call wildlife management or a conservationist that will come and collect the snake to relocate it but, more importantly, get it out of your hair.

Even dangerous snakes are vital parts of the ecosystem and you should take some pains to avoid killing them if possible.

However, if that strategy is not an option for you, or there is simply no time to waste, you’ll need to dispatch the snake.

Snakes are not tough opponents, but can be tricky to deal with due to the necessity of getting close to them in order to strike them with a melee weapon, or the necessity of actually hitting them with a firearm. They are definitely small targets, and most people are not good shots.

A great option for dealing with snakes is a shotgun loaded with birdshot from a modest distance, since these loads will greatly increase your chances of hitting it and the dense pattern of small shot is likely to completely obliterate the snake.

With any other firearm stand back, take careful aim and try to hit the snake in the head. Lacking a gun, you may use any long-handled garden tool with an edge or blade on it, and an effort to decapitate the snake.

Use maximum caution, and understand that even the snake’s severed head may still envenomate you with a bite!

So you might be deathly afraid of snakes and fear such an encounter, a run-in with a snake is usually nothing to worry about.

Most snakes will actively try to avoid you and assuming they don’t it is easy enough for you to avoid them, so long as you watch where you are putting your feet and hands.

You’ll need to take care if you’re in any place where snakes are common, and especially be vigilant when the season or weather makes it likely that snakes will be on the move.

We will not spam you.
Print
6
Shares

1 thought on “What to Do If You Run Into a Snake?”