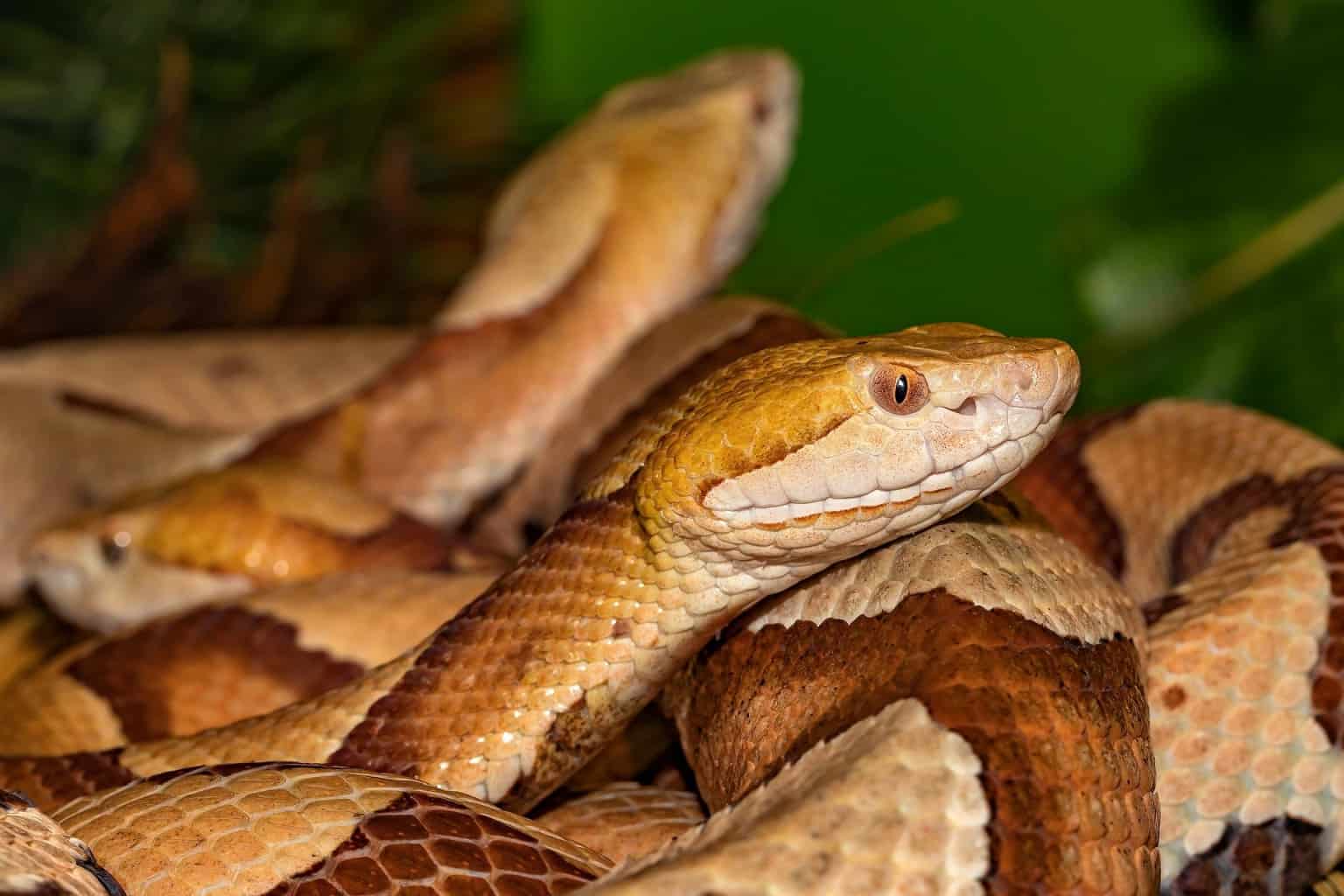 North America is full of snakes, all kinds, and some of them are venomous. Among these venomous snakes, the copperhead is one of the most common, and also the most likely to bite people according to various studies.

Considering the copperhead’s wide distribution, behavior and likeliness to bite preppers would be well-advised to become acquainted with this snake and understand what they are dealing with.

Part of this preparation is a thorough assessment of the consequences if one should be bitten by a copperhead. Just how dangerous are these snakes? How bad is a copperhead bite?

The common copperhead endemic to the eastern, southern and southwest U.S. is among the least dangerous of the venomous snakes of North America but this does not mean that a bite including envenomation is not a life-threatening medical emergency.

Copperhead venom is hemolytic, and breaks down blood cells, causing extreme pain and swelling at the bite site and tissue death, including that of muscle and bone.

In the remainder of this article we will share with you information to help you be more aware of this common venomous snake, and also how to spot them and avoid them.

The common copperhead (scientific name Agkistrodon contortrix) is a snake that could be described as average in size, trending towards small, with any specimens growing longer than 4 feet being a great rarity, and 3 feet or less in length is far more common.

The body is muscular, or stocky, and the snake has a wide and distinctive head, shaped like an arrowhead with a blunted tip, and where the nose transitions to the mouth its slopes backward towards the jaw giving it a chisel shaped appearance in profile.

The coloration of the snake is almost always some variation of a dusky copper or ochre color with regular, “squashed hourglass” bands running the length of the body.

This lends the snakes superlative camouflage in the environments that they frequent the most, those environs being forests, scrubby deserts and transitional environments between two biomes, all of which afford them ample hunting ground and plenty of opportunity to employ their natural camouflage.

The snakes are hardy and highly adaptable to new environments or changes in their typical environments, meaning you cannot let your guard down just because you are in a settled area…

These serpents are more than comfortable occupying brush, refuse and sawdust piles or any debris that is left to lay near a residential area.

Copperheads can be found all over the eastern, southern and southwestern United States, with a greater range reaching from northern New York state all the way south along the eastern seaboard into Florida and then moving throughout the entirety of the south and southern Midwest into Nebraska, Oklahoma and much of Texas. This is one snake you will have to stay constantly on the lookout for.

Aside from their excellent natural camouflage thanks for their coloration, copperheads also exhibit behavior that makes them so insidiously dangerous to humans who are traversing their typical habitats.

Compared to other snakes which will issue defensive warnings in the form of coiling into a noticeable pre-strike posture or in the case of rattlesnakes issuing their signature warning buzz copperheads are notorious for doing the exact opposite; they do nothing at all. Absolutely nothing, at least prior to striking.

When copperheads feel threatened or are uncertain, they will hold completely still, not even moving a muscle, until the danger has passed or the offending animal or person has trod upon them, at which point the copperhead will bite, although whether or not they will inject venom is anybody’s guess.

More on that later.

The tendency of copperheads to lay perfectly motionless among ground cover prior to striking after being stepped on means they will be a constant hazard in areas where they are common as they are very difficult to spot.

As you can probably guess, this tendency to lie completely still in advance of someone drawing near enough to actually make contact with them is responsible for the overwhelming majority of copperhead bites on people.

A copperhead snake that is lying still on a bed of dry leaves and twigs, ruddy clay soil or several other varieties of like-colored ground cover is essentially invisible, and even people who are alert and know what they are looking for will be hard pressed to spot them in certain conditions.

Even if you are not in a wilderness setting, you must still be on the lookout for copperheads as they adapt readily to changes in their environment.

The new habitat of a copperhead that has seen its environment encroached upon by human development will be your garden, your brush pile or the construction site of that new shed you are building.

Like most snakes, copperheads will take cover beneath objects on the ground to remain cool when they are resting or will perch, once again motionless, on elevated structures like branches, beams and so forth.

If you carelessly disturb any object the snake is resting upon or inadvertently make contact with the snake itself, a bite will be issued before you can react.

This is part and parcel of what makes copperheads so dangerous; their behavior combined with their environment makes bites on humans far more likely than any other venomous North American snake.

The venom of a copperhead attacks and destroys blood cells and carries with it the distinct risk of tissue death, including muscle and bone tissue, meaning amputation might be a consequence if a bite is not treated.

Typical symptoms of a copperhead envenomation will include extreme pain, throbbing, noticeable swelling, and an electrical tingling sensation at and around the bite site. The extremities, hands and feet alike, are particularly susceptible to the effects of copperhead venom.

A particular note for preppers (or anyone else who is operating in remote areas) is that copperheads are among the snakes most prone to utilizing a “dry bite”, which is a term for a bite that is delivered with no injection of venom.

Since venom is a precious resource for these reptiles, one that involves a considerable investment of calories and time to generate, most mature snakes do not use it without good cause, though young snakes are far more likely to envenomate often and heavily when they do bite.

Even if a copperhead does decide to envenomate when it bites in self-defense, the amount of venom injected is highly variable, and the wound characteristics of the bite will vary correspondingly depending upon the dosage.

A copperhead bite may be nothing more than a mild puncture wound, (albeit one that carries with it a significant risk of infection owing to the swarming bacteria always present in the mouths of snakes) or a serious event that may yet involve the loss of part or all of a limb.

You should know that even full-tilt envenomations are rarely fatal for humans, though complications are far from uncommon.

Regardless of whether or not you think a copperhead bite has resulted in envenomation you must seek medical attention if at all possible. Antivenin is still the prescribed treatment for copperhead bites in the majority of circumstances where envenomation has occurred.

That being said, if you are ever in an austere setting where proper, institutional medical care is unavailable or cannot be reached in any reasonable time frame, do take heart that a bite that does not feature any excruciating pain or pronounced swelling is likely a dry bite.

While the copperhead’s venom is not too impressive when compared to so many of its cousins among the rest of North American venomous snakes, it is nonetheless a dangerous reptile that must be respected, as it is responsible for the majority of venomous snake bites in North America.

This snake’s propensity to lie completely motionless while making use of its excellent natural camouflage means that accidental contact occurs often, even when the victim had absolutely no clue that the snake was pressed.

Taking extraordinary caution to avoid placing hands and feet in any location that has not been visually scrutinized is essential for avoiding snake bites.