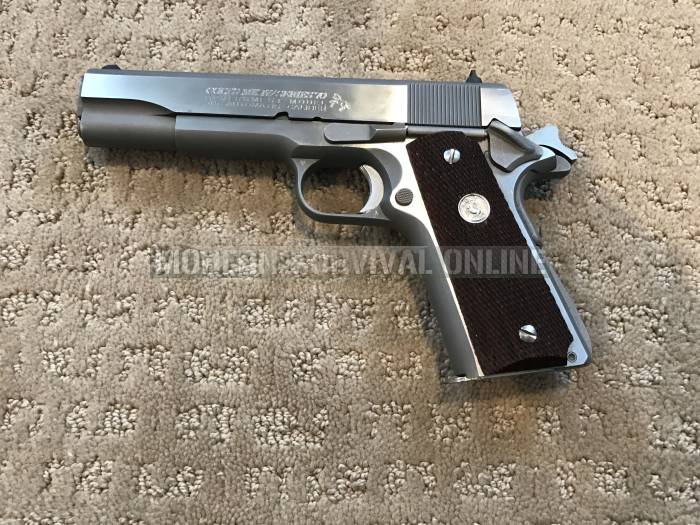 Even those who aren’t familiar with guns should at least have heard of the 1911 before.  It’s one of the most popular and classic handguns of all time, and while there are many variations of the 1911 produced, perhaps the most iconic one of all is the G.I-style of M1911A1 that was used by American soldiers in World War II, Korea, and Vietnam.

The G.I style of M1911A1 is notable for its short trigger, arched mainspring housing, small sights, short thumb safety, and small grip safety.  This is exactly what the Colt Mark VI Series 70 is: an almost identical replica of the original M1911A1 inside and out.  It’s not the most modern looking 1911 by any means, but it is easily the most classic.

Note the use of the term ‘almost identical’ replica instead of ‘identical.’  There are a few minor differences between the original M1911A1 and the Series 70.  To understand what these differences are, we need to go over the history of the two firearms.

HISTORY OF THE SERIES 70

The Series 70 is also available in blued or stainless steel, in contrast to the M1911A1 that was produced in a dull gray parkerized finish.  The thumb safety is also slightly longer on the Series 70 as well, whereas it is distinctively shorter on the M1911A1.  The markings between the two pistols are also obviously different, although they both sport the Colt name and logo.

One may wonder why you should buy a Series 70 if the 80 is the safer gun; the answer is that the firing pin increases the weight of the trigger pull on the Series 80.  One of the biggest appeals about the 1911 in general is its light and crisp trigger, and while the trigger on the Series 80 is by no means bad, it is definitely more pleasurable to shoot on the Series 70.  Furthermore, with more parts in the gun, there is also a slightly greater possibility for the Series 80 to have a breakage than the Series 70. In this regard, the Series 70 is regarded by some fans of the 1911 as the ‘original’ 1911 firing system, and is why it is still in production.

The outside features of the Series 70 and Series 80s have no difference whatsoever.  Even though Series 70s ship with an arched mainspring and short trigger, and Series 80 with a flat mainspring and long trigger like the original M1911, the two can be customized vice versa.  The only difference, therefore, is in the design of the internal safety system.

As mentioned above, the Mark IV Series 70 is available in either a blued or stainless steel finish.  While blued may look like a more classic finish, there’s no denying that stainless steel is the more rust and corrosion resistant finish.  If you’re going to be using your Series 70 as a range gun and will simply keep it in your safe, go with what you prefer, but if you plan on using your pistol as a duty, hunting, or SHTF sidearm, you should strongly consider the stainless over the bluing.

One interesting thing of note on the Series 70 is how while the finish is polished on the side of the gun, it is a duller matte finish on the top of the slide and on the bottom side of the frame.  This holds true for both the blued and the stainless steeled variations of the gun.

The Series 70 ships with beautiful rosewood grips, for both the blued and stainless versions, but these can be easily swapped out for any grips of your choosing.  The grips on this particular Series 70 have been swapped out for ones with the nickel Colt logo in the middle. 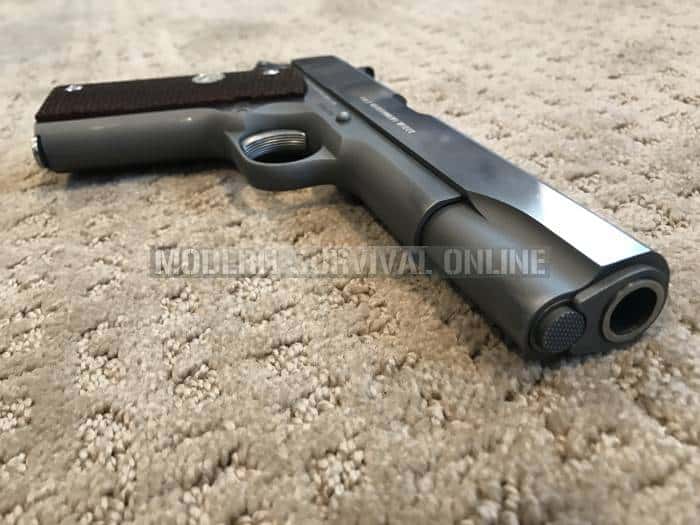 One of the letdowns on the Series 70, however, is the sights.  They’re simply small black sights without white dots, and as a result, can be difficult to line up naturally.  If you’re planning on doing some extensive shooting with your Series 70, you may be wise to consider having the sights swapped out with ones that are larger or more visible.

As with any 1911, shooting the Series 70 is a blast.  1911s are heavy, all-steel pistols, and this helps to dramatically soften the recoil of the powerful .45 ACP round.  As a result, new shooters should not fear firing the Series 70.

The Series 70 is also very well balanced and thanks to the design of the grip, it points very naturally in the hand.  This pistol is equally as fun to simply weigh in your hand as it is to fire it on the range.

Accuracy on the Series 70 is excellent for a variety of reasons: the natural point of aim, fine balance, soft recoil, light trigger pull, and the fixed barrel design (in contrast to the tilting barrel of more modern pistols).

Reliability on the Series 70 is also excellent.  Most 1911s need a break-in period in order to begin functioning reliably; in the 250 round break-in period of this particular Series 70, only one malfunction was encountered.  Afterwards, the pistol has functioned absolutely flawlessly.

Last but not least, the Series 70 is also a very smooth weapon.  Everything about it from racking the slide to pulling the trigger can be done without any grit encountered whatsoever. 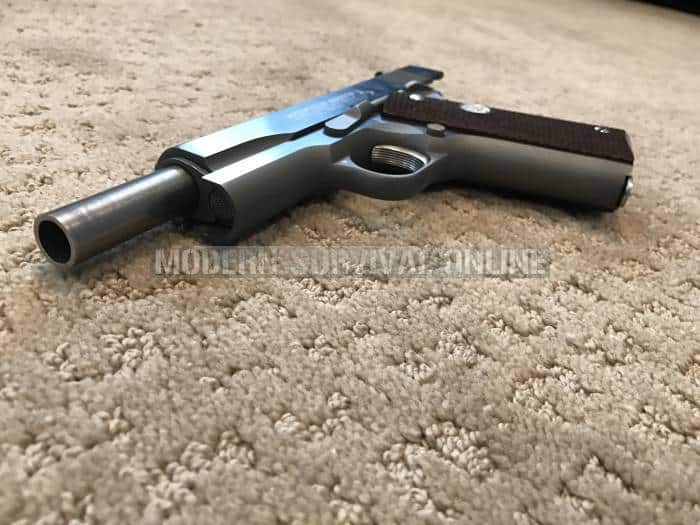 All in all, the Series 70 is a very faithful reproduction of the original M1911A1 while also delivering on build quality, durability, reliability, and accuracy.  Not only will it be a fun range gun, but it’s also suitable for home defense or as a sidearm in a survival situation.