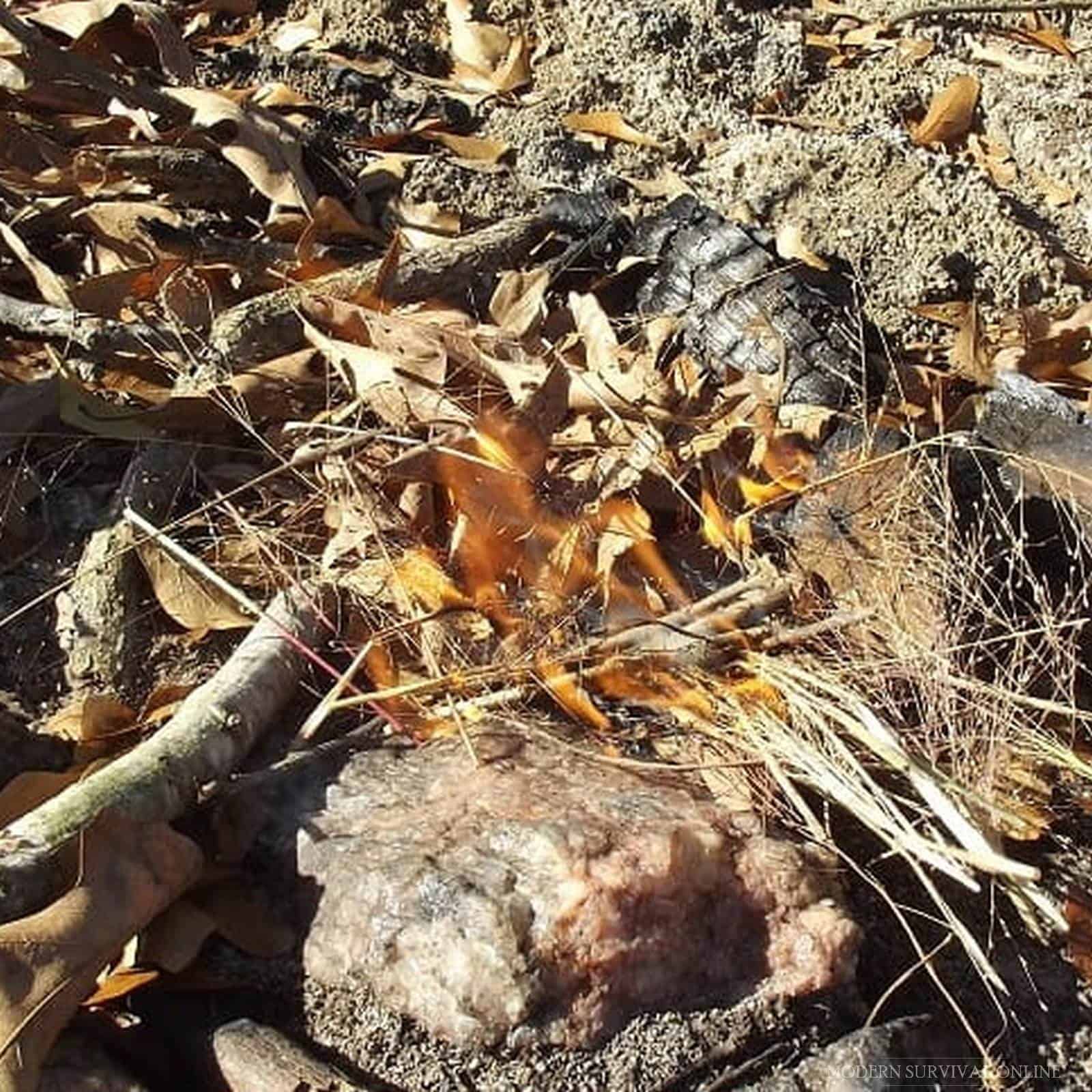 When camping in any remote area of wilderness, preppers are often advised to build a campfire not only to stay warm, but also to keep wild animals away. good advice, considering that many wild animals can be a nuisance at your campsite and some can be quite dangerous. but some reports abound of animals in remote places that show no fear of fire.

So, will a campfire keep wild animals away or not?

Possibly. Many animals show fear around fire, but certain species show absolutely no fear or recognition of fire as a danger. Under certain conditions animals may lose their fear of fire or learn to associate it with humans and a positive outcome in the form of food.

A campfire is definitely an asset, but perhaps not the asset that people think it is when it comes to repelling animals of all sorts. any assertion that goes so far against our conventional wisdom when it comes to camping must be investigated, and that is what we will do in the remainder of this article.

In This Article
What Kind of Animal is It?
Insects, Reptiles and Amphibians are Unlikely to be Repelled
Most Mammals Will Keep Away from Fire…
…But Perhaps Not for the Reasons You Think!
Small Mammals Don’t Seem to Fear Campfires That Much
It is Possible that a Campfire Could Attract Animals!
Bottom Line

What Kind of Animal is It?

When it comes to the likelihood of fire repelling an animal, we must first sort one animal from the other. Obviously, animals are not created equal, and differences in biology and behavior as well as reactions to various stimuli are as varied and numerous as grains of sand on the beach.

Accordingly, it pays to understand what kind of animals are in the biome you’ll be camping in, and among them which ones you really need to keep away from your camp. some animals are annoying, others are proper nuisances and some are downright dangerous.

You might be able to put up with annoying critters but if you are depending on your fire to keep dangerous wildlife, and it fails, you might be in for a rude awakening, literally!

Insects, Reptiles and Amphibians are Unlikely to be Repelled

When it comes to the smaller creatures in the woods, the desert or elsewhere in the world your fire is unlikely to have any effect on them when it comes to repulsion, and may indeed have the opposite effect!

Right up front, I am sorry to report that smoke from a campfire does nothing whatsoever to repel mosquitoes, and total defiance of old wives tales and prepper lore. it also doesn’t seem to confuse them in any meaningful way, as anyone who has spent time sitting in the smoke of a campfire trying desperately to keep from being eaten alive will tell you.

Other insects are attracted to light of all kinds, moths most infamously. but moths and many other insects will fly blithely right through the flames of your campfire and incinerate themselves without a second thought.

Unfortunately, most insects don’t seem to perceive fire as dangerous if they perceive it at all. Many are the tales of desert going campers who have awoken at night to find the area around their camp crawling with scorpions and other creatures eerily illuminated by the fire.

Similarly, most cold-blooded reptiles and amphibians don’t seem to recognize the danger that fire is or at least recognize it in time. plenty of anecdotal tales persist of frogs leaping directly into campfires, and it makes sense that snakes and lizards could potentially be attracted to a warmer area at night in order to thermoregulate their bodies.

But how about larger, furrier creatures?

Most Mammals Will Keep Away from Fire…

It seems that most mammalian life will in fact try to avoid a campfire. Certainly, mammals can detect heat and will perceive pain around a source of intense heat the same as we will.

It is also highly probable that any unusual presences or sights and sounds in their environment will give them pause or send them scurrying in the other direction.

…But Perhaps Not for the Reasons You Think!

Now, before you dismiss this as six of one and a half dozen of the other, this could potentially make a big difference as to whether or not you decide to depend on a fire if you are retiring for the night inside a tent and otherwise out of sight or are sleeping in the open.

We all know by now that generally letting an animal know of your presence is the best way to avoid surprising it, particularly in the case of large and dangerous mammals, so this is not a net negative in any case but, as with all things, nuance is important when it comes to making fully informed decisions!

Small Mammals Don’t Seem to Fear Campfires That Much

On the other hand it seems, somewhat bizarrely, that fire is not much of a deterrent whatsoever to smaller mammals, particularly rodents.

Countless tales exist of campers being visited or even assailed by everything from squirrels to possums and raccoons at their campsite with a campfire blazing away.

In the case of more inquisitive creatures like squirrels and raccoons, there have been reports that they have merrily ransacked any treats they could get their clutching little paws on while the fire crackled along cheerily in the background.

This seems hard to believe, but the sheer quantity of such tales not to mention the substantiation of them seems difficult to ignore. if you are counting on your fire to keep away the banditry of the animal kingdom you’re probably going to be sorely disappointed.

It is Possible that a Campfire Could Attract Animals!

Lastly, it must be pointed out that conditions exist where your fire could have strictly the opposite intention across many different species. In areas where humans frequent the natural habitat of mammals, particularly large mammals like mountain lions, bears and so forth, there’s a growing body of evidence that suggests campfires may actually be attracting certain specimens.

This is because repeated interactions with humans and repeated foraging or investigation of a human frequented areas has served as positive reinforcement on account of the presence of food for animals inhabiting these regions.

For such animals, the calculus is simple. Approach humans or approach human habitation and get food, often in substantial quantity.

It stands to reason that there’s such animals quickly lose their fear of any fires at campsites and may certainly even associate such fires with reward in the form of food!

It goes without saying that this is an extremely dangerous condition for both the beast and humans, and you should never depend upon a campfire to repel animals in such places or to keep you safe.

If you are camping in a touristy hotspot or such large animals are common, double your caution while at camp, fire or not.

It is generally accepted that a campfire will repel most mammals, but has little or no effect on insects, amphibians and reptiles. Larger mammals and in particular predators seem to be the most wary of fire in most circumstances, but larger mammals seem to be less deterred by one.

In some cases, animals have learned to associate the presence of a fire with humans, and have associated humans with food and so will seek out a campfire in the interests of being rewarded.

Ultimately, the decision of whether or not you should utilize a campfire is for other considerations such as light and warmth, and if it repels animals so much the better but you must not depend on it for protection or pest repellent.