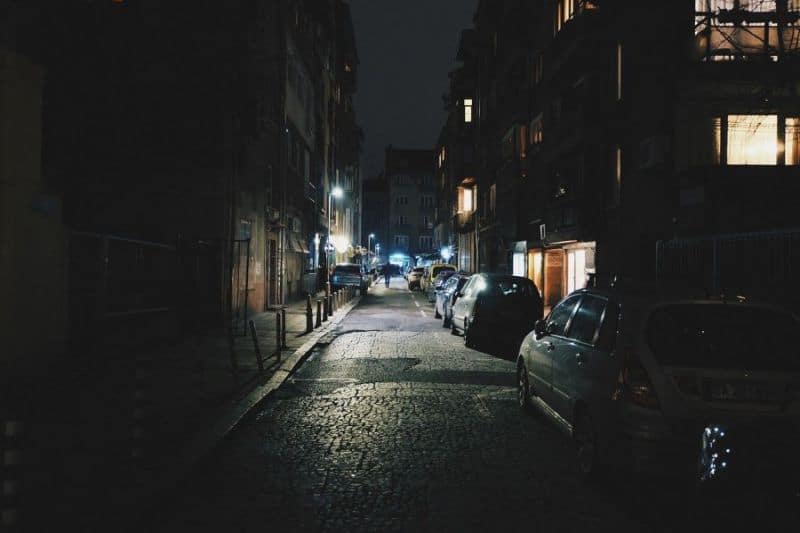 You are walking down the street at night. You hear footsteps behind you. They are drawing closer, growing louder, and the tempo of the steps is increasing.

What do you do?

Are you actually being followed?

In This Article
Situational Awareness
Why Would Someone Follow You?
Deductive Reasoning
In an Urban Environment
On foot
In a Vehicle
Stalkers
Practice Prevention
Conclusion

Develop Situational Awareness to notice if you are being watched or followed.

You need to relocate if that is the level of danger in your neighborhood. [sarcasm]. SA (Situational awareness) is about accurate threat assessment, and not walking around like a paranoid tacti-douche.

Practicing good SA will reduce your level of anxiety and help you to feel safer. SA is a skill that will take time to develop. You need the base knowledge, then practice it until it becomes a deeply ingrained, automatic behavior.

What motive would someone have for following you?

Practice Deductive Reasoning to determine if you are being watched or followed.

You are driving on the highway at night. You get off at an exit to get a coffee and top off the tank.

You notice the lights on the vehicle behind you getting off the exit and pulling into the parking lot. You get back on the highway, and that same car has pulled in behind you again.

Are you being followed?

Use deductive reasoning to minimize anxiety and accurately identify threats. Seeing threats that don’t exist is paranoia. I recall some situations where people reacted as though I were following them and I had some malicious intent. (I really wasn’t following them and had no bad intent).

Situation 1) I had just finished a several mile run, and was walking fast, cooling down. I was wearing Under-Armor running gear, and was covered in sweat, breathing hard. A 50’ish man wearing a martial arts jacket was ahead of me

As I drew closer, he started casting furtive glances at me. This continued until I drew abreast of him and passed him. I was wearing running gear, sweating, and breathing hard.

While I am not going to be on the cover of GQ or Esquire anytime soon, I keep a very neat appearance. I don’t look like a dirtbag or a slob, e.g. a mugger. It was obvious, or so I thought that I had been running rather than out looking for a victim.

Situation 2) I was out walking during a lunch break from work, going to the bank and post office on errands. I was dressed in business casual attire- Khakis and a button-down shirt.

A scruffy, skinny man in his late 20s was ahead of me. He kept turning and looking at me as I drew closer. He hooked his hand onto his wallet and paused, turning to watch me as I passed him.

I was dressed in business casual. It was daytime on a busy city street. Not the best place for a mugging. Muggers are not typically well-dressed either.

Situation 3) I was in my car driving down a city street. A woman was running. She looked nice so I glanced at her as I drove by. She turned and gave me a look of fear/anxiety.

The road curved around and I came to a stoplight. She ran past my car and looked at me so I looked back. The look on her face was closer to horror now than anxiety. You are running in yoga pants and have a good body, expect to get noticed.

A look is not sexual harassment. No, I did not yell Hey baby or any other adolescent idiocy, nor was I staring at her and slobbering. I also was not going to change direction so we didn’t see each other again or shield my eyes as I passed.

The examples above are individuals who have very likely been traumatized at some point in their lives, and they are hyperaware. But they will see threats almost everywhere, because their view of the world has been changed by a trauma.

This results in false positives or seeing something which is not there. This can become a very tiresome way to live your life, leading to mental exhaustion and isolation, as going out in public becomes too much effort.

In an Urban Environment

You suspect someone is following you. There are some methods you can use to determine you are actually being followed, and then measures you can take to lose your follower or stop them from following.

1) Identify them. Phone camera/dash cam/backup cam on and start documenting. Note as much information as possible. Note the make, model, and color of the car, and a description of the driver and any passengers, any identifying marks on the vehicle, and of course the license plate number.

3) Lose them. but don’t put yourself and others in danger with reckless maneuvers or excessive speed.

You have an ex-lover calling you twenty times an hour, all day long. She shows up at your home, knocking on the door and kicking the door, demanding to be let in. You ignore her until she leaves, but she calls, emails and texts you all night, and is in the parking lot of your workplace the next morning.

You are in a bad situation and need to do something.

Stalkers can be thought of as long-term followers. They be an ex-lover, someone you had only very casual contact with, or a complete stranger.

Stalkers obsess and fixate on specific person, engaging in ongoing surveillance, harassment, and pursuit. Their goal may be to establish or re-establish a relationship.

They are very disturbed individuals who have lost all perspective. They may intend their target physical harm, and they can do major psychological harm.

Never make anything easy for the bad guys.

1) Do not stick to a routine. Be unpredictable. Take different routes to and from work , school, or errands, depart and arrive at different times, and use different conveniences stores. Laundromats, and markets. Confound anyone who may be watching you.

2) If you are leading a criminal lifestyle, and/or using drugs, people coming after you is inevitable. This does not include law enforcement. Start asking if the juice is worth the squeeze and if it time to get out of the life.

3) This goes along with point number one. Be very careful who you let into your life. Damaged, toxic individuals can lead you into all kinds of drama, or outright danger.

They draw other damaged people, may be involved with crime or associate with other criminals, and don’t know how to take no for an answer if you try to set limits with them or exclude them from your life. It is better to avoid them than invite them in and try to rescind the invitation later.

Be highly selective about who you associate with and avoid damaged people. Damaged individuals are those who are prone to violence, are emotionally immature, have poor impulse control, a low tolerance for frustration, and poor coping.

Ask yourself why you would want these people in your life. Are you going to fix them? Do you believe you can’t do any better? If you have a pattern or history of attracting losers, or abusive individuals, get to a good therapist and find out why you do this and how to change it.

4) Try to avoid fringe areas or going out alone after dark. Predators look for victims. The best place to find victims are fringe areas with no cameras or witnesses, e.g., a highway rest stop bathroom, or mall bathroom. Predators also like the dark. Avoid these areas as much as possible.

5) Practice good on-line security. Don’t post your travel plans on social media. Your laptop or device is a window into the world.

You have to be careful who you let in if you want to be safe. See some of my thoughts on this topic here.

6) Keep yourself and your vehicle ready for emergencies. Don’t go below half a tank of gas, and keep your vehicle well maintained. You do not want to find yourself in a situation where someone is following you in a vehicle and your car craps out.

Stay fit and be able to run and escape if you need to. If you have been subsisting on pizza, ice cream, beer and two packs of ciggs, you are not going to be in condition to retreat to safety if you must.

If you are jacked and know how to move your body, you will also have more of a command and deterrence presence. You won’t look like a happy target.

The methods I have outlined here are far from infallible. The greater emphasis must be on prevention, not what to do if you are in a situation where someone is already following you.

We will not spam you.
Print
317
Shares

2 thoughts on “What To Do if Someone Is Following You”