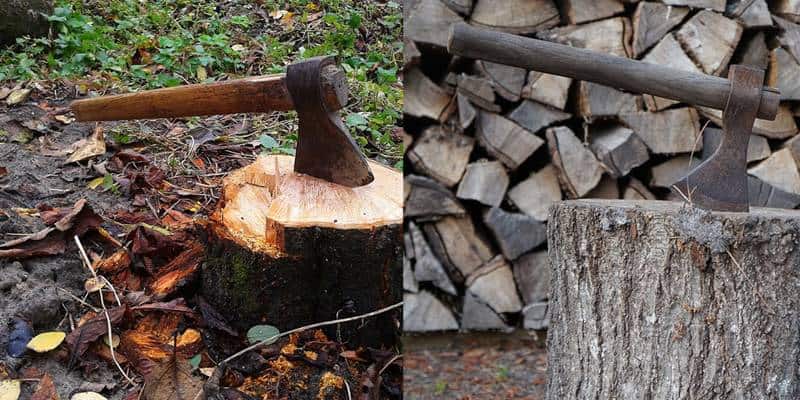 If you have spent any amount of time in the woods, chances are you have used or seen someone used an axe or a hatchet for clearing out a campsite, taking care of fallen branches and logs, or getting firewood ready to go on the fire.

These ancient chopping tools persist today more or less as they have always been, and are just as important for dealing with all kinds of live and dead timber.

One common argument that often brews up in the context of prepping is which tool you should include with your survival kit- an axe or a hatchet? You might see the terms used interchangeably, but regardless in the interest of adding clarity to the conversation we are asking today just what the differences are between hatchets and axes.

The main difference between axes and hatchets is size. Hatchets are small chopping tools that are best used with one hand (though they feature a head nearly identical to the axe). Hatchets also include a hammer on the side opposite the cutting edge. Axes are much longer, designed to be used with two hands, and feature one or two cutting edges on their head.

Unless you are really serious about hand tools, or are a woodsman or woodworker who requires a very specific make of chopping tool, that is pretty much where the differences end for most of us; an axe is long and a hatchet is short. If you care to dig into the topic a little bit deeper, however, we will be examining both tools in greater detail below.

The principal difference between hatchets and axes, aside from length, is the configuration of the head.

For fans and aficionados of chopping tools, there is a considerable amount of minutiae that will be lost on laypeople who just need to turn a log into smaller logs or get some proper firewood ready to go on the campfire.

Axes and hatchets can both be found with a considerable amount of variety in the shape, pitch, bevel and configuration of bits, but only a hatchet will have a proper hammerhead on the poll, or back side that is opposite the cutting edge. Additionally, only axes will be had with two cutting edges, what is known as a double bit axe.

For clarification, both axes and smaller hand axes might have a flat surface on the poll that is often used for pounding and driving pegs, but this is not its intended purpose.

A proper hatchet will have a hammer poll that looks very much like the same surface you would see on the carpenter’s hammer resting in your toolbox right now. This is one easy way to quickly identify a true hatchet.

Regarding the bit and the edge itself, hatchets and axes look more or less identical, though it is common for hatchets to show a more pronounced beard compared to a similarly shaped axe head.

The beard is the lower part of the bed that extends down towards the bottom of the handle, beneath the head itself. This is typically present on hatchets because it affords a slightly increased margin of error for striking, and also shows the hatchets lineage in use as a hewing tool for shaping logs.

The biggest difference between axes and hatchets, and the one most noticeable at first glance, is length, specifically length of the haft or handle.

If you consider the shape of the haft itself, you will notice that the haft of a hatchet is pretty much identical to that of an axe.

It will have the same send, oval section at the top designed to be inserted into the head before being fastened in place, a gently curved section near the bottom and a pronounced swell or bulge that is intended to keep the hand locked in place during hard use.

Even the overall shape and profile of the haft will be more or less identical, only shorter overall.

You should also know that you are likely to run across the terminology of “hand-axe” in your travels, and this is not just another name for a hatchet, not if you want to be specific!

You might think of a hand-axe as a compact axe that can be used with one or both hands, something more akin to a “hand and a half” axe. Like their larger siblings, axes will always lack the hammer poll that hatchets have, and can otherwise be found in any other traditional axe configuration.

Hatchets are not “Just” Compact Axes!

Anytime hatchets are being discussed it is worth bringing up that they are not just compact axe, and you should not treat them as such!

Well, actually they are, and they are used very much the same way, but therein is part of the problem: the shorter length of the hatchet makes accidents far more likely should you miss your intended point of aim or if it glances off upon impact.

A bit of bad luck or carelessness could result in you getting a sharpened hunk of steel going straight into your shin or thigh.

To counteract this, hatchets must be used with an even greater degree of care compared to their larger brethren, and many seasoned outdoorsmen will advise you to do your splitting and other work with it from a kneeling position in order to use the ground as a sort of safe backstop.

If you must use a hatchet while standing, even when chopping wood that is on an elevated platform, make sure you use the greatest possible care!

Axes and hatchets are broadly similar, with the chief differences being that hatchets are much shorter than two-handed axes and they traditionally feature a protruding hammerhead opposite the bit.

Today pretty much any small format axe is marketed as a “hatchet”, but real hatchets and hand axes are indeed different with the latter being larger than the average hatchet smaller than the typical axe. You should learn the ins-and-outs of both in order to choose the right tool for the job and your circumstances.