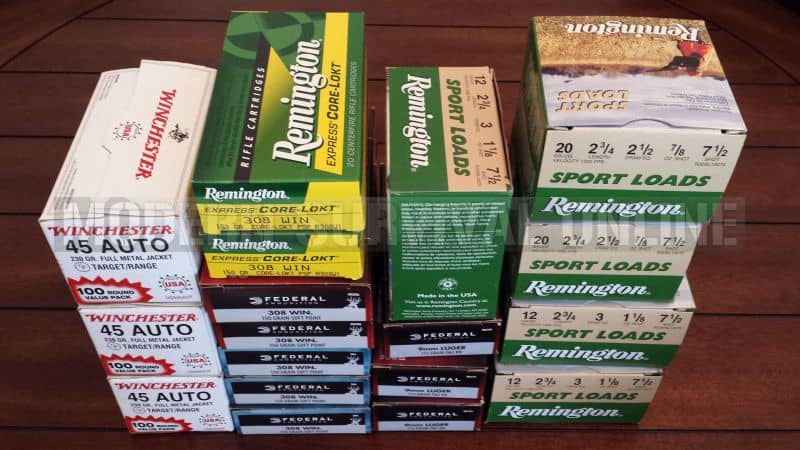 Whether you are a frequent shooter or not, stocking up on ammo is a must for any prepper. Not only is ammo useful for self defense in a SHTF situation, but it will also be needed for hunting and trade.

Because it is so useful, robust, and doesn’t expire quickly, ammo will most likely become the new currency when money fails.

That’s why it’s critical that you not only stock up on ammo, but also know how to store your ammo so that it can last for decades.

By doing this, you can avoid ammo shortages and potential future bans. It also gives you a more certain supply of ammo for hunting, shooting, and self defense.

In this article, we are going to take a look at the top 7 tips for storing your ammo long term so that you’ll know exactly what you need to do to keep your ammo in tip top shape across decades.

There is a lot of debate out there on which type of guns are best for survival situations. Chances are you already have your preference and have acquired your desired firearms.

While there is no specific correct answer here, we have to pay attention to what the most popular calibers are out there and consider stocking up on that type of ammo for potential future value.

Some of us will have chosen firearms for these popular calibers, which makes storing ammo for them that much easier. Even if you don’t have firearms in these calibers, you should think about storing some popular ammo for future barter.

When you start looking at the most popular guns out there, then these calibers start making sense. For example, the AR platform is a top choice among Americans. Typically, the majority of folks get an AR-15 as one of their primary guns.

Regardless, you should consider getting both the .223 and .308 ammo since it will be in high demand. There is a lot of discussion on the differences between these two calibers.

Another must have caliber is the classic .22 LR. Most people will have a .22 rifle that they either plink with or use to hunt small game.

You can usually get one of these for pretty cheap, and it makes a perfect survival gun for hunting squirrels. The .22 LR ammo is pretty cheap too and you can often buy it in bulk when there isn’t a shortage problem.

Another key topic here is that you should be aware of the details of ammunition. For example, the differences between rimfire and centerfire are important if you plan on having the ability to reload ammunition, which would make you highly valuable after SHTF. You’ll need a lot more equipment and supplies though in order to be successful at it.

As we can see from the many calibers to choose from, it makes a lot of sense to go ahead and think about standardizing your calibers so that you make ammo storage a lot more simplified.

Moisture is one of the biggest killers of ammo. Obviously, metal when exposed to moisture will rust and over time, the rust will end up destroying the integrity of the metal casing. Therefore, it is critical that you control the moisture in your storage environment.

Keep in mind that air holds quite a bit of moisture. The warmer the air is, the more moisture it can hold. This is where the concept of humidity comes in.

If your room seems pretty dry at 100 degrees Fahrenheit, then you cool down the air to 50 degrees, the air won’t be able to hold all of the moisture that it did before and that is when condensation will start forming on the surfaces in the room.

The best tips here are to either store your ammo in a room where you can control the moisture level, or carefully select a container with a good seal as we’ll discuss later and also use desiccants to help absorb any remaining moisture that you have locked away in the container.

You can get cheap Silica gel packets to put in your containers or there are more expensive desiccants if you have the budget. Remember that you have to carefully handle desiccants, and on occasion bake the moisture out of them to reactivate them.

Given our discussion on humidity, the biggest thing you want to try to do is to keep a stable and consistent temperature in your storage environment.

This helps prevent temperature cycle swings of the air that will cause moisture to collect on surfaces over and over again.

If you can keep your ammo in a nice air conditioned room, then you are golden. If you have to store it in a garage, attic, or shed where the temperature will be cycling a lot, you will need to take a lot of extra care to keep the moisture out of the container.

Plus, those temperature swings over time will constantly be expanding and contracting the metal in your ammo and container, which will degrade them over time and possibly erode the seal on the container.

You should always keep your ammo out of direct sunlight. There are many reasons why this is a good idea. Obviously, you should never have bare ammo sitting in the sunlight. I also doubt you would ever have a box of ammo out in the sun either for a long period of time.

There’s a rare chance that someone might have their ammo container sitting in the sun. The problem with this is that over time, the sunlight will start to degrade the container by first attacking the paint.

Once there are weaknesses in the paint, metal containers become vulnerable to rust, which leads to the integrity of the container being destroyed and leaving your ammo vulnerable.

The best practice here is to keep your ammo out of the sunlight not only to keep it in good shape, but also to keep it out of view of prying eyes. It’s a good idea to not let anyone other than close family know that you are stockpiling ammo in order to avoid trouble.

As for containers, if you have room in your home where you can safely store ammo on shelves in air conditioning and low moisture, then it makes sense to do so.

Otherwise, the best option is to go buy some military ammo cans. They are designed and built for storing ammo and are fairly cheap. You can find them at gun shops and gun shows.

You want to buy them in person so that you can inspect the rubber seal is brand new. There is no point in buying an old ammo can that has a seal that is worn out, as that undermines the whole purpose of the container.

While the military ammo cans are metal, there are also plastic alternatives that are the same size, color, and capability. Ironically, I have found the plastic ones are usually more expensive than the metal ones, but it may be different in your area.

You want to  consider how you plan on storing your ammo so that you have access to any that you need for shooting or hunting. That way you can keep the long term storage ammo sealed up so that you don’t have to constantly reactivate the desiccants once the containers are closed and sealed.

I recommend getting one military ammo can for each type of caliber and filling the can up with that same caliber ammo. You can then put a piece of tape and use a marker to label the ammo type on the front of the can.

This allows you to know what’s in the container without having to break the seal unless you intend to do so.

What I also do is buy an extra military ammo can and place all of my commonly used ammo in it that I use for shooting and hunting. I then label it my “common” can and that way I can open it often and replenish that ammo whenever I need to so that it’s the only container that I have to open.

As far as location, your situation might be different. If you have a storage room in your home where you can keep your ammo in the air conditioning, then putting your ammo in metal cans with silica desiccants is the absolute best way to go.

Another great place is to stack your ammo cans in the back and bottom of your closet areas so that they are out of sight.

If you have to store your ammo outside, then make sure you have the water tight container with desiccant solution. You will have the best results if you can put them in the most temperature and humidity stable location possible.

If you plan on burying your ammo, then you might need to take extra precautions for sealing up your containers to prevent water intrusion and to protect against root invasion and other problems. Only bury ammo if you have no other choice.

To wrap up, we looked at the 7 major tips for you to be able to store your ammo for decades.

Remember that ammo is one of the best items that you can stockpile for a SHTF situation. You want to choose the most popular calibers because that will be the ammo that is in the highest demand.

You also want to make sure that you put your ammo in the right container, and that you can somewhat control the temperature, moisture, and sunlight. By keeping the ammo organized properly, you don’t have to break the seal of your containers too often, and can find what you need easily.

Tom Sheppard is a long time survivalist. He spends a lot of time out in the North Texas woods and enjoys prepping. In his spare time, he shares his expertise by writing articles. He often contributes what he knows over at Trek Warrior on survival gear and skills.

We will not spam you.
Print
211
Shares