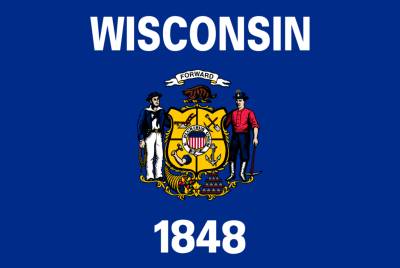 Since a 2016 revision of Wisconsin’s existing legislation governing knives, it is now an excellent, pro-knife state which is sure to thrill knife owners of all stripes. There is no category of knife that is expressly forbidden based on its action, features or any other characteristics, and you can carry any kind of knife at all openly or concealed.

Wisconsin now has strong preemption laws covering knives, and that means you won’t have to contend with the oftentimes treacherous legal landscape that arises when municipalities can enforce their own laws on weapons that are in excess of state standards.

Wisconsin is definitely a pleasant surprise for knife owners and we will provide you with a usable summary of everything you need to know below along with specific legal statutes that cancer knives at the end of this article.

Wisconsin does not explicitly forbid any category of knife based on its type, action or any other features, and furthermore no knife is included in the category of dangerous weapon which would otherwise introduce restrictions and caveats when it comes to the possession and carry of them.

Wisconsin is predominantly concerned with the intent behind the carrying of a knife, or the use of the same. So long as you are not using your knife in any criminal capacity, or to further the commission of a crime, you aren’t going to have any issues.

Wisconsin now has strong preemption laws governing knives so towns and cities will not be able to enact their own regulations on knives that are more restrictive than the states extremely relaxed laws on the same.

Wisconsin allows its citizens and visitors to carry any kind of knife they please concealed with no permit required, so long as the knife is being carried for any lawful purpose, and not used in the furtherance or commission of any crime.

It is worth repeating that there is no category of knife explicitly banned from possession or carry in the state of Wisconsin.

Wisconsin makes no distinction between the carry of knives with the benefit of a permit as opposed to without, and you will gain no additional privileges should you have a permit issued by Wisconsin or a permit from another state that is recognized by Wisconsin.

The open carry of all legal knives is legal in Wisconsin so long as it is not done for any criminal purpose.

You may not carry any knife into any building that is owned by the state, or onto the grounds or within any structure owned or operated by any school, and this includes grade schools as well as colleges and technical schools. There is no exemption for any particular kind of knife, so don’t bring them!

Since 2016 and the attendant overhaul of Wisconsin’s knife legislation, it is now an excellent state in all regards for knife owners, with no types of knives being banned from position or carry, unless one is carrying a knife with criminal Intent.

Strong preemption laws means there is only one set of rules throughout the state and you will not run afoul of any surprisingly restrictive local laws that could get you in trouble.

“In chs. 939 to 948 and 951, the following words and phrases have the designated meanings unless the context of a specific section manifestly requires a different construction or the word or phrase is defined in s. 948.01 for purposes of ch. 948:

(10) “Dangerous weapon” means any firearm, whether loaded or unloaded; any device designed as a weapon and capable of producing death or great bodily harm; any ligature or other instrumentality used on the throat, neck, nose, or mouth of another person to impede, partially or completely, breathing or circulation of blood; any electric weapon, as defined in s. 941.295 (1c) (a); or any other device or instrumentality which, in the manner it is used or intended to be used, is calculated or likely to produce death or great bodily harm.

1. The person is employed by a state or local government agency in another state.

2. The agency has authorized the person to carry a firearm.

3. The person is not the subject of any disciplinary action by the agency that could result in the suspension or loss of the person’s law enforcement authority.

4. The person meets all standards established by the agency to qualify the person on a regular basis to use a firearm.

5. The person is not prohibited under federal law from possessing a firearm.

(2) Any person, other than one of the following, who carries a concealed and dangerous weapon is guilty of a Class A misdemeanor:

(e) An individual who carries a concealed and dangerous weapon, as defined in s. 175.60 (1) (j), in his or her own dwelling or place of business or on land that he or she owns, leases, or legally occupies.

(1) In this section, “dangerous weapon” means any firearm, loaded or unloaded; any electric weapon, as defined in s. 941.295 (1c) (a); metallic knuckles or knuckles of any substance which could be put to the same use with the same or similar effect as metallic knuckles; a nunchaku or any similar weapon consisting of 2 sticks of wood, plastic or metal connected at one end by a length of rope, chain, wire or leather; a cestus or similar material weighted with metal or other substance and worn on the hand; a shuriken or any similar pointed star-like object intended to injure a person when thrown; or a manrikigusari or similar length of chain having weighted ends.

(a) Any person under 18 years of age who possesses or goes armed with a dangerous weapon is guilty of a Class A misdemeanor.

(b) Except as provided in par. (c), any person who intentionally sells, loans or gives a dangerous weapon to a person under 18 years of age is guilty of a Class I felony.

(c) Whoever violates par. (b) is guilty of a Class H felony if the person under 18 years of age under par. (b) discharges the firearm and the discharge causes death to himself, herself or another.

(a) Nothing in this section prohibits a county from imposing a sales tax or use tax under subch. V of ch. 77 on any knife or any firearm or part of a firearm, including ammunition and reloader components, sold in the county.

(b) “Political subdivision” means a city, village, town or county.

(2) Except as provided in subs. (3) and (4), no political subdivision may enact or enforce an ordinance or adopt a resolution that regulates the sale, purchase, purchase delay, transfer, ownership, use, keeping, possession, bearing, transportation, licensing, permitting, registration, or taxation of any knife or any firearm or part of a firearm, including ammunition and reloader components, unless the ordinance or resolution is the same as or similar to, and no more stringent than, a state statute.