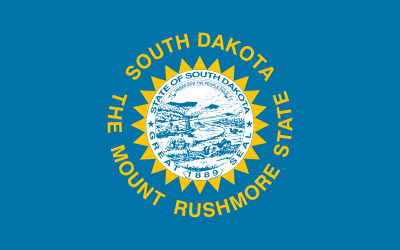 South Dakota is an exemplary state for the carry and ownership of knives of all kinds, hampered only by the fact that the state lacks any preemption laws to help keep the legal playing field level across the board as you travel from place to place.

As it turns out several towns and cities in South Dakota have their own regulations on knives that will affect you more than the state’s laws.

But, so far as the state is concerned, you are allowed to carry any kind of knife you want to openly or concealed. From the most tricked-out tactical switchblade to the heftiest fixed blade fighting knife, it is a 100% A-OK in South Dakota.

Below you will find our assessment that contains everything you need to know about carrying a knife in the state as well as a selection of the most important state statutes at the end of this article.

The state of South Dakota hardly has any mentions of knives at all on their law books. No type of knife is banned from ownership or possession.

Unfortunately, as mentioned above there is no statewide preemption law on the books in South Dakota, and that means local laws will take precedence when it comes to the possession and carry of weapons including knives.

Several major towns and cities have laws of their own that are significantly more restrictive than the state’s own laws, including prohibitions on concealed carry, blade length and more.

South Dakota allows the carry of any kind of knife whatsoever without benefit of a permit within its borders, though as mentioned you will have to contend with whatever local county and city laws apply in the place you are traveling through or stay. Sad to say, but some of them are significantly more restrictive than the state standard.

But back to the states laws themselves, South Dakota is fairly unique in that the definition of concealed as it applies to the statutes concerning weapons only applies to firearms in particular.

If you care to look up the definition below on your own you will see it is quite simple in this regard. South Dakota defines “dangerous and deadly weapons” as knives which are calculated or designed to inflict death or serious bodily harm according to the manner in which it is used.

This could of course be any knife used in the commission of a crime, but no particular category, class or feature of knife is named in the definition.

Additional South Dakota statutes make it clear that the concealed of said deadly or dangerous weapon is only a crime if it is done with the intent to commit a felony, in which case it is a felony itself.

This is so simple you might be forgiven for thinking this is some kind of deception on part of the lawmakers, but it is not. South Dakota is and remains a staunch pro-second Amendment state, and has no concerns whatsoever with its citizens carrying knives about.

South Dakota makes no distinction at all when it comes to carrying a knife with a permit as opposed to without.

What is worth mentioning is that the statute regarding the concealed carry of a pistol while obtaining a concealed weapons permit specifically states that being issued a permit by the state, or obtaining a permit from another state that has reciprocity with South Dakota does not impose any general prohibition on the carrier of a pistol without a permit.

Though the permit statute is referring specifically to pistols, it is highly illuminating concerning South Dakota’s attitude towards the Second Amendment and its citizens. This is one of very few times where it is shown to be overwhelmingly positive!

The open carry of knives is completely permissible in South Dakota, though once again some cities have their own restrictions concerning open carry particularly. Make sure you stay on top of those local laws!

You cannot carry a knife into any courthouse or court room, into any state capitol building or into any public school or public school grounds. There are exceptions, see the statutes below.

South Dakota is an excellent state for knife owners concerning possession and carry, but unfortunately has one major shortcoming in the form of a lack of statewide preemption.

Several towns and cities have taken advantage of this gap and oversight to enact their own laws that are significantly more restrictive than the state standard, and that might hamper your travel plans depending on what you prefer to carry.

Pay attention to the local laws, avoid taking your knife into a courthouse or school, and you should not have much in the way of problems in South Dakota.

(1) If applied to the intent with which an act is done or omitted:

(a) The words, “malice, maliciously,” and all derivatives thereof import a wish to intentionally vex, annoy, or injure another person, established either by proof or presumption of law;

(d) The words, “reckless, recklessly,” and all derivatives thereof, import a conscious and unjustifiable disregard of a substantial risk that the offender’s conduct may cause a certain result or may be of a certain nature. A person is reckless with respect to circumstances if that person consciously and unjustifiably disregards a substantial risk that such circumstances may exist;

(e) The words, “neglect, negligently,” and all words derived thereof, import a want of attention to the nature or probable consequences of an act or omission which a prudent person ordinarily bestows in acting in his or her own concerns;

(2) “Actor,” the person who takes the active part in a transaction;

(6) “Concealed,” any firearm that is totally hidden from view. If any part of the firearm is capable of being seen, it is not concealed;

(44A) “Serious bodily injury,” such injury as is grave and not trivial, and gives rise to apprehension of danger to life, health, or limb;

22-14-8. Concealment of weapon with intent to commit felony—

Felony. Any person who conceals on or about his or her person a controlled or dangerous weapon with intent to commit a felony is guilty of a Class 5 felony.

A permit to carry a concealed pistol shall be issued to any person by the sheriff of the county in which the applicant resides. The permit shall be valid throughout the state and shall be issued pursuant to § 23-7-7.1. For purposes of verifying the qualifications of an applicant, prior to issuing a permit, the sheriff shall execute, and the applicant shall pass, a background investigation, including a computer check of available on-line records and the National Instant Criminal Background Check. The issuance of a permit to carry a concealed pistol under this chapter, or the recognition of nonresident permits to carry a concealed pistol under § 23-7-7.4, does not impose a general prohibition on the carry of a pistol without a permit.

13-32-7. Possession of firearm or dangerous weapon on public elementary or secondary school premises or in vehicle or building as misdemeanor—Exceptions.

Any person, other than a law enforcement officer or school sentinel under § 13-64-1, who intentionally carries, possesses, stores, keeps, leaves, places, or puts into the possession of another person, any dangerous weapon, firearm, or air gun, whether or not the firearm or air gun is designed, adapted, used, or intended to be used primarily for imitative or noisemaking purposes, on or in any public elementary or secondary school premises, vehicle, or building, or on or in any premises, vehicle, or building used or leased for public elementary or secondary school functions, whether or not any person is endangered by any action under this section, is guilty of a Class 1 misdemeanor. The provisions of this section do not apply to;

(1) Use of a starting gun at an athletic event;

(c) Supervised school or session for training in the use of firearms; or

(4) Any church or other house of worship; or

(5) Any nonpublic school located on the premises of a church or other house of worship.

Except as provided in § 22-14-24, any person who knowingly possesses or causes to be present any firearm or other dangerous weapon, in any county courthouse or in the state capitol, or attempts to do so, is guilty of a Class 1 misdemeanor.