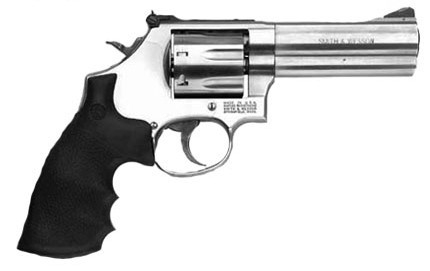 Smith & Wesson makes all kinds of nice guns these days, even rifles, but to the faithful the name conjures images of only one thing: revolvers, and damn good ones. For 100 years S&W has been making wheelguns that have served citizens, cops and soldiers continuously all over the world. They continue to serve today.

It is a wonder that the nearly ancient revolver continues to find popularity and relevance today among all of the high-tech and high-capacity autoloaders. Plenty of shooters think revolvers are obsolete, old fashioned and inefficient. The facts are not with them however, as a quality revolver is more than up to the task of keeping you and your family safe.

Out of all the revolvers big and small that S&W has produced the 686 is one of their bar-none best, and best selling: accurate, reliable and a great platform for the now legendary .357 Magnum, the 686 represents all that Smith & Wesson has done, and continues to do well. If you want a do-it-all dependable mid-size revolver, the 686 is the one to get, and in this article I’ll tell you all about this excellent wheelgun.

Most shooters don’t know that round is so old. This mighty round was introduced in the eponymous S&W Registered Magnum, the first gun to chamber it and now a mythically sought-after gun by collectors.

The gun was made almost too well and was discontinued after but a few years of production but the cartridge made one hell of an impression and was there to stay. Appearing a few years after the Registered Magnum, the Model 27, an N-frame revolver in S&W parlance was introduced.

It remains in production today and lent much of its DNA to the 686. Both the Model 27 and Registered Magnum were excellent handguns, but were too expensive and too bulky for the needs of the average citizen or cop working a beat. Folks wanted this screaming-hot new round in a leaner frame.

You might say they went too far in the intended direction at the S&W design offices, though: before the just-right size of the L-frame was conceived, some madmen crammed the .357 Magnum into the long-standing and completely totable K-framed Model 10 and called it the Model 13.

This produced an extremely powerful and carry-able gun, but it seems ol’ number 13 lived up to its reputation: the gun would not hold up long under the constant pounding of this ferocious round, the combination of svelte frame and less mass being too severe a test of metallurgy at the time.

A few gems sprang from that union though; the outstanding Model 19 Combat Magnum being one, and it remains one of the most beloved revolvers in its class, but the .357 Magnum would remained marooned in a way for another 45 years in either a actually-too-small K-frame, or an overabundance-of-caution-too-big N-frame.

All that changed in 1980 with the advent of our subject: the gleaming stainless steel L-frame 686, and its cousin the blued carbon steel 586. The L-frame was, and remains, the best chassis for the .357 Magnum today. Only a little bigger and beefier than the K-frame, the L-frame is enlarged just enough to allow a larger, stronger cylinder, one that has thick enough walls to stand up to a constant diet of the most powerful magnum loadings.

Make no mistake, the L-frame is not a K-frame and only a novice would mistake it for one, but it is also noticeable trimmer than the stocky N-frame, which is better suited to the mauling .44 Magnum pioneered in that chassis. The increased strength of the L-frame proved a perfect fit: strong enough to handle the stoutest loads and tame a little recoil while being small enough for convenient carry, on the belt or otherwise.

A star was born! And today the 686 enjoys a rapid following of S&W aficionados and itself serves as the template for several other models in S&W’s lineup. A 7-shot version of the gun is available alongside other fancy, enhanced custom shop models. To many shooters, the 686 was and remains the iconic model of what a .357 Magnum revolver is, what it should be.

There is no mistaking the 686 for anything but what it is and that is a classically made Smith & Wesson wheelgun. The shape of the gun and the layout of all of its controls is instantly recognizable as so, from the shape and placement of the cylinder release and the style of the ejector rod to the location and size of the screws on the sideplate.

While old salts like me lament that the latest and greatest S&W’s are actually pale imitation of the kind of guns the company used to crank out, and nowhere is that more noticeable than the action, the 686 nevertheless has a very smooth and manageable double action trigger and a scary-crisp single-action trigger, both ideal for getting rounds on target with a revolver.

The gun is made entirely of stainless steel (not chrome plated, as is sometimes believed) and has a traditional and right capacity of 6 rounds. Well, 7, maybe, if you get that version. Factory grips are ergonomic rubber, but you can get grips in any material, size, shape or color you want today; being a really popular gun sure helps with your 3rd party support, huh?
Barrel length varies: the standard is 4”. Various models have barrels anywhere from 6” all the way down to 2 1/2”.

The 686 is entirely typical as far as operation is concerned. The cylinder is released by pressing the latch forward and dropping it out of the frame. Empties are easily removed by a smack on the full-length ejector rod and then fresh rounds are inserted into the chambers by hand or with a loading device like a speedloader. Once accomplished, the cylinder is closed and the gun is ready to fire.

Once you have fired your six, in single- or double-action mode, you release the cylinder to start again. A picture of simplicity.

The 686 is reliable and packs plenty of power into a modestly sized handgun. The .357 Magnum has an excellent if bloody history of impressive results against all kinds of critters, human and animal included in that tally. The gun is certainly easy to shoot thanks to its good balance and remarkably nice trigger.

While some see the .357 Magnum as a poor choice today compared to the wimpier .38 Special due to the availability of high-performance .38 loads in increasingly stronger guns, I think the .357 Magnum makes the most sense from a self-defense or survival-mode standpoint.

The choice of a .357 Magnum gives you far greater flexibility when it comes to ammo: you can load .357 or .38 into a gun chambered for the .357 but not the other way around. This gives you a greater pool of ammo to draw from, and also lets you tailor your loading to the task at hand, be that mild practice or bug-stomping self-defense.

The question of capacity that seems to stay on everyone’s lips is a moot point for most users, unless you are scampering around a foreign battlefield somewhere.

You can look up all the statistics for self-defense yourself, but I can give you the short version: it is a rarity that any self-defense encounter for a civilian will ever take more than 3 shots to resolve, win or lose. A 6-shot revolver and one spare load of ammo is more than enough to handle anything at all that might come your way.

Now, on the matter of concealed carry, the 686 is no pipsqueak, even with the short barrel. It is hefty and it is broad, doubly so compared to a single-stack semi.

The wideness of a revolver’s cylinder does not make it super comfortable to carry IWB but a good holster can help mitigate this somewhat. This is a highly personal thing, and depending on your proportions it might be intolerable or cause you no grief at all.

Bottom Line: a 686 loaded with modern .357 rounds and in skilled hands is heavy medicine for those who would harm you.

Smith & Wesson invented Magnum handguns, so it is only fitting that they retain the mantle of “Best in Class”, and that lofty crown is carried by the 686.

The 686 is an ideal revolver, being durable, accurate and easy to shoot well. If you don’t mind the heft, a 686 make a great companion by the bedside or in your holster.

We will not spam you.
Print
107
Shares