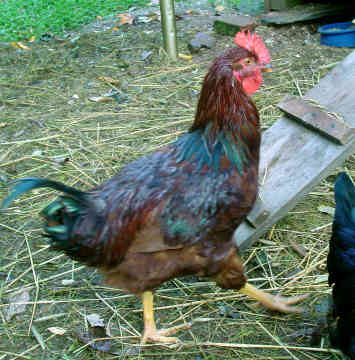 Raising poultry is new to me. I remembered many older skills from my parents day and refined what I recalled from them. Keeping chickens was not one of those things.

The only reason I write this is to show how incredibly easy it is. With a minimum of research you can be having farm fresh eggs for your breakfast.

Since moving to the country, Tractor Supply Co. has become my new mall. It is the source for many of the things that I now need here in the sticks. On one of my prowls they had a couple pens with live chicks of various breeds. Hmmm I said.

I went home to research chicken breeds on the web. The first thing I learned was: did I want meat chickens or layers and that would determine if I needed a rooster. I decided on layers, Rhode Island Reds have a reputation as good year round layers. I liked eggs and could always sell or trade the excess or as has happened give them to my neighbors. 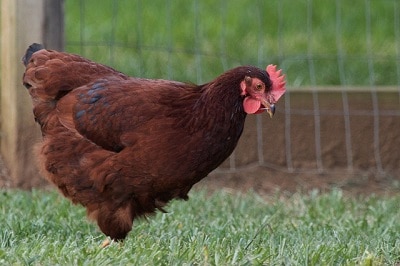 I went back to TSC and bought a hutch and small wired run, $99 each. A bit expensive but quick and easily assembled. I also bought a small feeder and water dispenser.

Two days later I had my chicken house set up near the back door by the deck. I wanted to be able to keep an easy eye on them as I have many feral cats and other predators here. I closed in the sides with cardboard and added a lamp hood with a thermal flood bulb to keep the chicks warm as the temps were low at that time. A thermometer monitored the hutch temps.

Back to TSC for chicks. I had planned to only get two, until I had some idea what I was doing. Nope, sold only by the six-pack. OK, I bought six, a fifty pound bag of chick feed, some Pro-biotic to mix into their water and the FFA agricultural education book “How to raise chickens” by Chrstine Heindrichs. TSC has a nice down on the farm book shelf available.

Back home with my Box-O-Chicks and to read up a bit. I was a bit obsessive with the pro-biotic, feed, water, and heat lamp, certain that I was going to lose some of them.

As they grew bigger, I moved the hutch and run out to the sheds, but within sight. I was still afraid of predators so I moved Deogee the dog out there with them, nearby.

We have a lot of large predatory birds here so I was hesitant to free range them, but we all have to leave the nest sometime. They stayed under the trees for sometime near the hutch in the day and back in the hutch at night. They eventually ranged the entire fenced property. They have neatly edged the fence line and cleared out the ticks and other bugs. They now only return to the hutch to eat and lay, having found roosts in the water tower cross braces and atop the aquaponics tanks.

As Deogee is also red, they think he is the head chicken, much to his confusion. He leads the flock run to feed from the door to the run every morning, where I refill the now larger feed and water dispensers. They have been on Layer feed for some time now and are giving me 6 good sized brown eggs a day, dependent on stress and weather.

Its been over a year. My fridge always has a couple dozen eggs, I have become friends with some neighbors because of the eggs, and Deogee is in analysis.

Chickens are an amusement and really funny. More than that they are easy to keep given the many rewards and a constant food source for grid down. Maybe this year a rooster and meat breed.