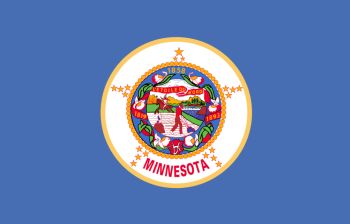 Minnesota is a state with odd, and seemingly contradictory knife laws. While the Minnesota statutes are quite lengthy, and the intricacy of the wording often gives the impression that a law is more restrictive than it actually is, the state is surprisingly permissive when it comes to the type and style of knives that you may carry.

The only type of knife that is expressly forbidden is the switchblade, or automatic. You may not possess, carry or manufacture one in the state of Minnesota.

Other than that, you may own and carry any kind and length of knife you desire, though the state is marred by a complete lack of statewide preemption and that could potentially get you into trouble; quite a few cities and towns throughout Minnesota have knife laws that are significantly more restrictive than the statewide standard.

We will tell you everything you need to know about the state laws in the rest of the article below.

It does not take a genius to figure out that any knife of any kind can potentially produce great bodily harm or death when employed against another human being.

Do take care that, when choosing a knife, ones with a more aggressive appearance or combative design pedigree are more likely to be adjudged dangerous weapons.

Switchblades are not permitted to be possessed or carried in the state of Minnesota, but the statutes accomplish this by a fairly circuitous route.

Minnesota declares the mishandling of any dangerous weapon as a misdemeanor, with mishandling meaning using it or wielding it in a way as to endanger the safety of another person.

In the same section they declare manufacturing, transferring, or possessing any switchblade knife that opens automatically as an equivalent crime.

This brings us to an important consideration regarding switchblades: Minnesota has failed to define a switchblade with any precise language, and due to the way they have worded several state statutes concerning switchblades, it is likely that assisted-opening knives might be lumped in under that definition.

Unfortunately, Minnesota has not revised statutes to include the now ubiquitous “bias toward closure” language that protects these common and popular knives from switchblade statutes in various states. Proceed at your own peril if you choose to carry an assisted opening knife in Minnesota.

Be advised that Minnesota’s lack of statewide preemption means that certain cities and counties will have regulations on knives that are far stricter than the state standard.

You may carry any legal knife concealed on or about your person without a permit in Minnesota, though you should be warned that many localities have their own laws concerning the concealment of weapons.

Open carry of knives is legal, but it is worth mentioning that Minnesota still has on the books one of these strangest laws of its kind concerning knives and other weapons.

Any person who is armed with a dirk, dagger, sword, pistol, or other dangerous weapon without “reasonable cause” to fear an assault on their person may, upon complaint of another, be required to pay a surety bond to the complainant for a term not exceeding six months.

You can think of a surety bond as a sort of monetary guarantee that you won’t run amok or cause trouble with the weapon. Good grief! Let that be reason enough to keep your weapons concealed in Minnesota!

Any government buildings in the capitol, any courtroom or court facility and any school, school grounds, recreational facility or sports field. The state statutes go on at some length as to what precisely is and is not allowable regarding carry of weapons in these places, and it is worth a read in case you are someone who is exempted.

Minnesota is a knife permissive state overall, but the extreme length and wordiness of the state statutes does not inspire much in the way of certainty. Switchblades are not permitted, and thanks to a weakly worded statute, assisted-opening knives might be a perilous choice.

Though you can carry any other kind of knife concealed safely, make sure you check local laws before proceeding; Minnesota completely lacks any statewide preemption concerning knives.

Subdivision 1. Misdemeanor and gross misdemeanor crimes. (a) Whoever does any of the following is guilty of a crime and may be sentenced as provided in paragraph (b):

(1) recklessly handles or uses a gun or other dangerous weapon or explosive so as to endanger the safety of another; or

(2) intentionally points a gun of any kind, capable of injuring or killing a human being and whether loaded or unloaded, at or toward another; or

(3) manufactures or sells for any unlawful purpose any weapon known as a slungshot or sand club; or

(5) possesses any other dangerous article or substance for the purpose of being used unlawfully as a weapon against another; or

“Whoever shall go armed with a dirk, dagger, sword, pistol, or other offensive and dangerous weapon, without reasonable cause to fear an assault or other injury or violence to person, family, or property, may, on complaint of any other person having reasonable cause to fear an injury or breach of the peace, be required to find sureties for keeping the peace, for a term not exceeding six months, with the right of appealing as before provided.”

(a) Except as provided under paragraphs (d) and (f), whoever possesses, stores, or keeps a dangerous weapon while knowingly on school property is guilty of a felony and may be sentenced to imprisonment for not more than five years or to payment of a fine of not more than $ 10,000, or both.

(e) As used in this subdivision:

(i) a public or private elementary, middle, or secondary school building and its improved grounds, whether leased or owned by the school;

(ii) a child care center licensed under chapter 245A during the period children are present and participating in a child care program;

(iii) the area within a school bus when that bus is being used by a school to transport one or more elementary, middle, or secondary school students to and from school-related activities, including curricular, cocurricular, noncurricular, extracurricular, and supplementary activities; and

(iv) that portion of a building or facility under the temporary, exclusive control of a public or private school, a school district, or an association of such entities where conspicuous signs are prominently posted at each entrance that give actual notice to persons of the school-related use.

(f) This subdivision does not apply to:

(3) persons authorized to carry a pistol under section 624.714 while in a motor vehicle or outside of a motor vehicle to directly place a firearm in, or retrieve it from, the trunk or rear area of the vehicle;

(7) a gun or knife show held on school property;

(8) possession of dangerous weapons, BB guns, or replica firearms with written permission of the principal or other person having general control and supervision of the school or the director of a child care center; or (…)

(a) A person who commits either of the following acts is guilty of a felony and may be sentenced to imprisonment for not more than five years or to payment of a fine of not more than $ 10,000, or both:

(1) possesses a dangerous weapon, ammunition, or explosives within any courthouse complex; or

(2) possesses a dangerous weapon, ammunition, or explosives in any state building within the Capitol Area described in chapter 15B, other than the National Guard Armory.