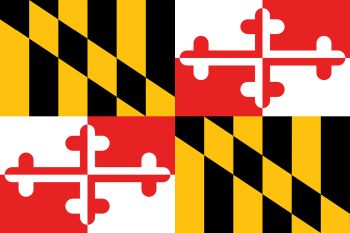 Maryland is a generally permissive state when it comes to the carry of knives, but you will be sharply limited on the style or type of knife you are allowed to carry.

Pretty much the only kind of knife you are able to carry concealed is a penknife, a definition that is not commonly encountered today.

You can sensibly open carry any knife that is not a dangerous weapon, but under that classification you will find such styles of knife as dirk, switchblade, bowie, star knife (throwing star / shuriken) or razor. That can potentially encompass a majority fraction of all knives!

But you had better make sure you are on the right side of the law when carrying a knife in Maryland: if you should be charged you can expect substantial fines and significant criminal charges!

While you can own pretty much any kind of knife you want in the state of Maryland, it is illegal to display, sell, offer to sell, transfer, or otherwise barter a switchblade knife or a ballistic knife.

Maryland carry laws get a little bit complex. What you can and cannot carry is partially dictated by whether or not you have a state concealed weapons permit.

If you do not have a permit, you cannot concealed carry any fixed blade knife, any throwing star (which the state calls a star-knife), any razor or any switchblade.

You should definitely know that the way Maryland defines switchblade means that in all probability assisted opening knives will fall under that province, so definitely don’t carry a simple assisted opening pocket knife if you don’t have a concealed weapons permit.

A pen knife is defined as any pocket knife that has a blade that folds into the handle. that pretty much describes any folding pocket knife, doesn’t it?

Hold on just a minute: don’t some folding pocket knives have features that could see them classified as a dangerous weapon in court? Potentially, and any of you that are already passingly familiar with state laws know that that is anything but a clear answer.

But fortunately in this case the courts in Maryland have already clarified with little ambiguity any knife meeting the definition of pen knife that is not a switchblade (meaning an automatic or assisted-opening knife) is a-okay for concealed carry. There are no other restrictions or classifications on the knife based on that action.

Before you strap on that big bowie knife, you must understand that the courts reserve the right to judge the circumstances under which you decided to carry that restricted knife at their pleasure.

Your decision making process as well as your reasonableness will be assessed and dissected with excruciating thoroughness should you be charged with a crime while carrying that knife.

Don’t be dumb: if you want to carry one of these restricted knives mentioned above get yourself a Maryland concealed weapons permit! Otherwise stick with a simple knife that meets the definition of penknife in all regards to stay on the safe side!

Maryland statutes clearly state that a person may carry openly on or about their personage a knife so long as it is not a dangerous weapon.

If you care to consult the definitions in the statutes below, you will see that “dangerous weapon” includes dirk knife, bowie knife, switchblade knife, star knife and razor.

No explicit definitions are given for the aforementioned types of knives, so it is assumed that they have the common meaning. It is in your best interest to understand those definitions and choose a knife that is decidedly not any of the above if you want to openly carry it in the state of Maryland.

Public schools. The carrying of any kind of knife by any person and for any reason on or in public school property is a violation of Maryland law, and carries with it stiff penalties.

Don’t take it on school grounds, don’t take it into school buildings, don’t even take it to school functions off school property if you are smart. It doesn’t matter if you are a student, uninvited guests, anything.

No knives in public schools. The only exceptions to this law are for law enforcement officers, be they on duty, off duty or retired, and even then they must be there as the guest or relative of a student and badged.

Note that this law only applies to public schools, not private schools, and those private institutions can implement their own rules on the subject.

But on the other trying to open carry or carry concealed without a permit sharply limits the kinds of knives you have access to for carrying in public.

Make sure you read up on the relevant definitions and ensure that your knife does not fall into any prohibited categories based on your permitting status or mode of carry.

The following is the bulk of Maryland’s important laws governing the ownership and carry of knives. Quite a bit of it is fairly dry reading, but considering how stiff the penalties and attendant charges are in the state, it is in your best interest to become familiar with all of it.

Pay careful attention to what kind of knives you are allowed to carry and under what circumstances. Your mode of carry along with your permit status will be critical to staying out of trouble:

(1) In this section the following words have the meanings indicated.

(4) “Star knife” means a device used as a throwing weapon, consisting of several sharp or pointed blades arrayed as radially disposed arms about a central disk.

(ii) “Weapon” does not include:

2. a penknife without a switchblade.

(b) Exceptions for certain individuals. — This section does not prohibit the following individuals from carrying a weapon:

(2) a special agent of a railroad;

(3) a holder of a permit to carry a handgun issued under Title 5, Subtitle 3 of the Public Safety Article; or

(4) an individual who carries the weapon as a reasonable precaution against apprehended danger, subject to the right of the court in an action arising under this section to judge the reasonableness of the carrying of the weapon, and the proper occasion for carrying it, under the evidence in the case.

(1) A person may not wear or carry a dangerous weapon of any kind concealed on or about the person.

(2) A person may not wear or carry a dangerous weapon, chemical mace, pepper mace, or a tear gas device openly with the intent or purpose of injuring an individual in an unlawful manner.

(ii) A minor may not carry a dangerous weapon between 1 hour after sunset and 1 hour before sunrise, whether concealed or not, except while:

1. on a bona fide hunting trip; or

2. engaged in or on the way to or returning from a bona fide trap shoot, sport shooting event, or any organized civic or military activity.

(1) A person who violates this section is guilty of a misdemeanor and on conviction is subject to imprisonment not exceeding 3 years or a fine not exceeding $ 1,000 or both.

4-105. Transfer of switchblade or shooting knife

(a) Prohibited. — A person may not sell, barter, display, or offer to sell or barter:

(1) a knife or a penknife having a blade that opens automatically by hand pressure applied to a button, spring, or other device in the handle of the knife, commonly called a switchblade knife or a switchblade penknife; or

(2) a device that is designed to propel a knife from a metal sheath by means of a high-compression ejector spring, commonly called a shooting knife.

(b) Penalty. — A person who violates this section is guilty of a misdemeanor and on conviction is subject to imprisonment not exceeding 12 months or a fine of not less than $ 50 and not exceeding $ 500 or both.

(a) Exceptions. — This section does not apply to:

(1) a law enforcement officer in the regular course of the officer’s duty;

(ii) the weapon carried or possessed by the officer or retired officer is concealed; and

(iii) the officer or retired officer is authorized to carry a concealed handgun in the State;

(3) a person hired by a county board of education specifically for the purpose of guarding public school property;

(4) a person engaged in organized shooting activity for educational purposes; or

(5) a person who, with a written invitation from the school principal, displays or engages in a historical demonstration using a weapon or a replica of a weapon for educational purposes.

(b) Prohibited. — A person may not carry or possess a firearm, knife, or deadly weapon of any kind on public school property.

(1) Except as provided in paragraph (2) of this subsection, a person who violates this section is guilty of a misdemeanor and on conviction is subject to imprisonment not exceeding 3 years or a fine not exceeding $ 1,000 or both.

(2) A person who is convicted of carrying or possessing a handgun in violation of this section shall be sentenced under Subtitle 2 of this title.