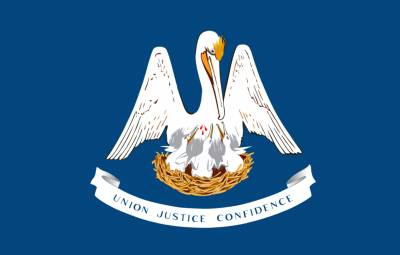 Louisiana is a state with excellent knife laws for its citizens, allowing anyone to own any type of knife they desire and carry it openly, with only a single restriction against the carry of any kind of switchblade, or automatic knife, concealed.

Notably, the state statutes exempt assisted opening knives, gravity knives, and other knives that are able to be open with only one hand from the definition of switchblade, an appreciated inclusion that some other states have yet to correct.

Louisiana state statutes are written in such a way that they are easy to understand for the layperson, though you should pay attention to the use and definition of certain words throughout the text as it is easy to get confused when they substitute a broad categorical word for weapon or knife.

But ,in an unfortunate turn Louisiana, sadly lacks any statewide preemption statute overriding local knife laws, which means you will have to stay up-to-date on what county and city laws affect your choices. Notably Baton Rouge, Shreveport and New Orleans all have regulations more restrictive than the state’s.

All that aside, we will help you figure out what you need to know in the rest of this article and have included the exact text of the most pertinent state statutes at the very end for your perusal.

Louisiana does not specifically forbid any particular kind of knife from being owned, or generally possessed. The state also does not have any restriction on the configuration or blade length of any given knife. If you take the time to read the state statutes included below, you will see the term “instrumentality” pop up regularly.

Though this term is utilized to indicate unemployment or weapon other than a firearm, knives are not included in the definition of instrumentality or dangerous instrumentality, but you can also see defined in the text.

The only part of the passage that might get you in trouble is if you should carry any such instrumentality or knife with intent to use it in a criminally negligent way. Obviously, carrying a knife for utilitarian purposes or self-defense is not a criminal act.

Also note that it is illegal for anyone adjudicated mentally incompetent (or criminally crazy), anyone with a felony criminal record, or anyone with a misdemeanor record of domestic violence to own a weapon in the state of Louisiana.

It is worth noting that anyone who has served their sentence and remained free of transgressions for 10 years since their release may petition the state to have their civil rights, including their right to own and carry weapons, restored.

The concealed carry of any type of knife is okay in Louisiana with one obvious exception, that being automatic knives, or switchblades. There are no two ways around it; you may carry a switchblade openly, but you may not intentionally conceal it on or about your person.

Happily, the language utilized in the state statutes specifically excludes from the definition of switchblade any knife which may be opened with one hand through pressure being applied to the blade, or any projection of the blade and any knife that is opened by inertial action, so long as the knife has a detent or other component providing resistance to opening or some other mechanical bias towards remaining in the closed position.

What this means is that assisted-opening knives are alright to conceal; only true switchblades, or automatic knives, are forbidden from being concealed.

The state of Louisiana makes no distinction on the concealment of knives with a permit as opposed to without a permit.

The open carry of all kinds of knives is allowed in the state of Louisiana, though one should exercise caution if openly carrying a switchblade in a belt pouch or scabbard, or some other contrivance that could be construed as concealing it from ordinary sight.

You cannot carry any knife onto the grounds of any school, into any school building, aboard any school vehicle or on the premises of any school run activity, event or function, including athletic events.

Louisiana is an overwhelmingly positive state when it comes to citizen ownership and carry of knives, with a notable exception for bidding the concealed carry of any switchblade or automatic knife, though the same statutes that forbid the carrying of those knives explicitly allow assisted opening knives and any knife which is capable of being opened with one hand.

Be warned that felons and anyone who has been charged with a misdemeanor crime of domestic violence may not possess a knife in the state of Louisiana.

§94. Illegal use of weapons or dangerous instrumentalities

A. Illegal use of weapons or dangerous instrumentalities is the intentional or criminally negligent discharging of any firearm, or the throwing, placing, or other use of any article, liquid, or substance, where it is foreseeable that it may result in death or great bodily harm to a human being.

B. Except as provided in Subsection E, whoever commits the crime of illegal use of weapons or dangerous instrumentalities shall be fined not more than one thousand dollars, or imprisoned with or without hard labor for not more than two years, or both.

C. Except as provided in Subsection E, on a second or subsequent conviction, the offender shall be imprisoned at hard labor for not less than five years nor more than seven years, without benefit of probation or suspension of sentence.

A. Illegal carrying of weapons is:

(1) The intentional concealment of any firearm, or other instrumentality customarily used or intended for probable use as a dangerous weapon, on one’s person; or

(2) The ownership, possession, custody or use of any firearm, or other instrumentality customarily used as a dangerous weapon, at any time by an enemy alien; or

(3) The ownership, possession, custody or use of any tools, or dynamite, or nitroglycerine, or explosives, or other instrumentality customarily used by thieves or burglars at any time by any person with the intent to commit a crime; or

(4)(a) The intentional concealment on one’s person of any switchblade knife, spring knife, or other knife or similar instrument having a blade which may be automatically unfolded or extended from a handle by the manipulation of a button, switch, latch, or similar contrivance located on the handle.

(b) The provisions of this Paragraph shall not apply to the following:

(i) Any knife that may be opened with one hand by manual pressure applied to the blade or any projection of the blade.

(ii) Any knife that may be opened by means of inertia produced by the hand, wrist, or other movement, provided the knife has either a detent or other structure that provides resistance that shall be overcome in opening or initiating the opening movement of the blade or a bias or spring load toward the closed position.

§95.1. Possession of firearm or carrying concealed weapon by a person convicted of certain felonies

A. It is unlawful for any person who has been convicted of, or has been found not guilty by reason of insanity for, a crime of violence as defined in R.S. 14:2(B) which is a felony or simple burglary, burglary of a pharmacy, burglary of an inhabited dwelling, unauthorized entry of an inhabited dwelling, felony illegal use of weapons or dangerous instrumentalities, manufacture or possession of a delayed action incendiary device, manufacture or possession of a bomb, or possession of a firearm while in the possession of or during the sale or distribution of a controlled dangerous substance, or any violation of the Uniform Controlled Dangerous Substances Law which is a felony, or any crime which is defined as a sex offense in R.S. 15:541, or any crime defined as an attempt to commit one of the above-enumerated offenses under the laws of this state, or who has been convicted under the laws of any other state or of the United States or of any foreign government or country of a crime which, if committed in this state, would be one of the above-enumerated crimes, to possess a firearm or carry a concealed weapon.

§95.10. Possession of a firearm or carrying of a concealed weapon by a person convicted of domestic abuse battery and certain offenses of battery of a dating partner

A. It is unlawful for any person who has been convicted of any of the following offenses to possess a firearm or carry a concealed weapon:

C. A person shall not be considered to have been convicted of domestic abuse battery or battery of a dating partner for purposes of this Section unless the person was represented by counsel in the case, or knowingly and intelligently waived the right to counsel in the case; and in the case of a prosecution for an offense described in this Section for which a person was entitled to a jury trial in the jurisdiction in which the case was tried, either the case was tried by a jury, or the person knowingly and intelligently waived the right to have the case tried by a jury, by guilty plea or otherwise. A person shall not be considered convicted of R.S. 14:34.9 or 35.3 for the purposes of this Section if the conviction has been expunged, set aside, or is an offense for which the person has been pardoned or had civil rights restored unless the pardon, expungement, or restoration of civil rights expressly provides that the person may not ship, possess, or receive firearms.

§95.2. Carrying a firearm or dangerous weapon by a student or nonstudent on school property, at school-sponsored functions, or in a firearm-free zone

A. Carrying a firearm, or dangerous weapon as defined in R.S. 14:2, by a student or nonstudent on school property, at a school sponsored function, or in a firearm-free zone is unlawful and shall be defined as possession of any firearm or dangerous weapon, on one’s person, at any time while on a school campus, on school transportation, or at any school sponsored function in a specific designated area including but not limited to athletic competitions, dances, parties, or any extracurricular activities, or within one thousand feet of any school campus.