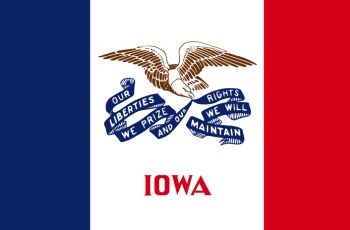 Iowa is a mixed-bag state when it comes to the ownership and carry of knives. With a cursory inspection of the state regulations, you might think Iowa was quite pro-knife, since it allows both open and concealed carry, and you have a fair bit of choice when it comes to choosing a legal knife.

However, the deeper you dig the worse it gets, as the state statutes are written in a rambling way, one where any given knife could fit into one or potentially two restricted categories of weapons. There are also not insignificant restrictions on blade length, action and type of knives that you are allowed to carry.

Trying to parse through Iowa knife laws is not easy and not fun, so we have tried to do the heavy lifting for you, and will give you the details you need to know in the remainder of this article.

Iowa does not expressly forbid any type of knife except a ballistic knife, which is one that expels the blade as a projectile via spring action, through use of elastic material, a compressed gas charge or some other means.

Iowa takes great pains, and uses an awful lot of ink to classify knives into one of two broad categories:

Knowing which category your knife belongs to is essential for carrying within the confines of the law. You definitely don’t want to get this wrong, as making a mistake here could see you slapped with an aggravated misdemeanor.

Iowa defines a “dangerous weapon” as any instrument or device that is designed primarily for use in inflicting death or injury upon a human being or animal.

Included in this definition is the “offensive weapon” category, along with daggers, razors, stilettos, switchblades and any knife having a blade that exceeds 5 inches in length.

Also included in this category is any weapon of like kind or any device, tool or other instrument of any kind that is used in a way as to be likely to inflict death or serious injury upon someone else.

The term offensive weapon includes quite a few weapons, but for our purposes only includes ballistic knives, or any components or tools designed to create a ballistic knife.

You can own a dangerous weapon so long as you do not carry it, but you cannot own an offensive weapon, i.e. a ballistic knife, at all.

Iowa also lacks statewide preemption laws entirely, meaning you must be acquainted with, and follow all local laws that govern the carry of knives, as well as what types are legal to possess.

Many local laws, especially those in larger cities, are typically more stringent than those found throughout the state so this is a bit of a pain in the butt.

The only exceptions to this are if you are carrying an otherwise legal knife on or about your person at your home, place of business, while hunting or fishing and actively engaged in those pursuits.

The restrictions on knives are identical for those who have a concealed weapons permit valid in the state of Iowa, excepting that the law states one may produce said valid permit for a law enforcement officer at the time inquiry if carrying a knife that is otherwise restricted, such as a dirk, stiletto or any knife with a blade exceeding 5 inches in length.

While this part of the law is short and succinct, easy to interpret and to the point (forgive the pun) it is still not as strong a fortification of citizens’ rights as I would prefer, as the statute further goes on to say that one may likewise produce a valid permit at trial for said crime as an affirmative defense.

This does leave some room for doubt that one might be cleared at the scene of any wrongdoing if you are carrying a knife that is otherwise legal, should one lack a permit.

You may open carry any knife that is not a “dangerous weapon” or “offensive weapon”. See the definitions above, and the state statutes at the end of this article for clarification on these terms.

Take great care that you do not violate Iowa law regarding carry of knives in prohibited places as it could possibly earn you felony charges and a fine that is double the usual maximum rate!

Iowa allows its citizens a fair amount of latitude regarding what kind of knives they may carry, but it is far from the most permissive of states.

Restrictions on certain types and categories of knives and fairly odious restrictions on length means that larger knives are out of the question, unless one obtains a concealed weapons permit.

The state’s lack of preemption also means it is entirely possible that one runs afoul how confusing patchwork laws as they travel to and fro. Make sure you stay on top of local laws in the areas that you frequent the most when carrying a knife in Iowa.

They are lengthy, confusing, and sometimes difficult to interpret, but it is your sole responsibility to remain inside the bounds of the law. The most pertinent Iowa State statutes concerning knives are below.

A “dangerous weapon” is any instrument or device designed primarily for use in inflicting death or injury upon a human being or animal, and which is capable of inflicting death upon a human being when used in the manner for which it was designed, except a bow and arrow when possessed and used for hunting or any other lawful purpose. Additionally, any instrument or device of any sort whatsoever which is actually used in such a manner as to indicate that the defendant intends to inflict death or serious injury upon the other, and which, when so used, is capable of inflicting death upon a human being, is a dangerous weapon. Dangerous weapons include but are not limited to any offensive weapon, pistol, revolver, or other firearm, dagger, razor, stiletto, switchblade knife, knife having a blade exceeding five inches in length, or any portable device or weapon directing an electric current, impulse, wave, or beam that produces a high-voltage pulse designed to immobilize a person.

An offensive weapon is any device or instrumentality of the following types:

e. Any part or combination of parts either designed or intended to be used to convert any device into an offensive weapon as described in paragraphs “a” through “d”, or to assemble into such an offensive weapon, except magazines or other parts, ammunition, or ammunition components used in common with lawful sporting firearms or parts including but not limited to barrels suitable for refitting to sporting firearms.

Any person, other than a person authorized herein, who knowingly possesses an offensive weapon commits a class “D” felony.

1. Except as otherwise provided in this section, a person who goes armed with a dangerous weapon concealed on or about the person, or who, within the limits of any city, goes armed with a pistol or revolver, or any loaded firearm of any kind, whether concealed or not, or who knowingly carries or transports in a vehicle a pistol or revolver, commits an aggravated misdemeanor.

2. A person who goes armed with a knife concealed on or about the person, if the person uses the knife in the commission of a crime, commits an aggravated misdemeanor.

3. A person who goes armed with a knife concealed on or about the person, if the person does not use the knife in the commission of a crime:

a. If the knife has a blade exceeding eight inches in length, commits an aggravated misdemeanor.

b. If the knife has a blade exceeding five inches but not exceeding eight inches in length, commits a serious misdemeanor.

4. Subsections 1 through 3 do not apply to any of the following:

a. A person who goes armed with a dangerous weapon in the person’s own dwelling or place of business, or on land owned or possessed by the person

g. A person while the person is lawfully engaged in target practice on a range designed for that purpose or while actually engaged in lawful hunting.

i. A person who has in the person’s possession and who displays to a peace officer on demand a valid permit to carry weapons which has been issued to the person, and whose conduct is within the limits of that permit. A person shall not be convicted of a violation of this section if the person produces at the person’s trial a permit to carry weapons which was valid at the time of the alleged offense and which would have brought the person’s conduct within this exception if the permit had been produced at the time of the alleged offense.

1. As used in this section, “weapons free zone” means the area in or on, or within one thousand feet of, the real property comprising a public or private elementary or secondary school, or in or on the real property comprising a public park. A weapons free zone shall not include that portion of a public park designated as a hunting area under section 461A.42.

2. Notwithstanding sections 902.9 and 903.1, a person who commits a public offense involving a firearm or offensive weapon, within a weapons free zone, in violation of this or any other chapter shall be subject to a fine of twice the maximum amount which may otherwise be imposed for the public offense.

a. A felon sentenced for a first conviction for a violation of section 124.401D, shall be confined for no more than ninety-nine years.

1. If a person eighteen years of age or older is convicted of a simple or serious misdemeanor and a specific penalty is not provided for or if a person under eighteen years of age has been waived to adult court pursuant to section 232.45 on a felony charge and is subsequently convicted of a simple, serious, or aggravated misdemeanor, the court shall determine the sentence, and shall fix the period of confinement or the amount of fine, which fine shall not be suspended by the court, within the following limits:

b. For a serious misdemeanor, there shall be a fine of at least three hundred fifteen dollars but not to exceed one thousand eight hundred seventy-five dollars. In addition, the court may also order imprisonment not to exceed one year.

2. When a person is convicted of an aggravated misdemeanor, and a specific penalty is not provided for, the maximum penalty shall be imprisonment not to exceed two years. There shall be a fine of at least six hundred twenty-five dollars but not to exceed six thousand two hundred fifty dollars. When a judgment of conviction of an aggravated misdemeanor is entered against any person and the court imposes a sentence of confinement for a period of more than one year the term shall be an indeterminate term.