A while back I wrote about an idea I had using small solar-powered lights to charge AA batteries. Works well and is inexpensive. Reader “Brad” sent me an email and gave me another idea. Use these lights as a silent alarm.

Here is how it works:

First – a solar light has its post removed as it is going to be mounted to a tree, not stuck in the ground.

Second – look at the solar light and find a safe place away from the electronics to drill a hole for a mounting screw. Drill the hole. 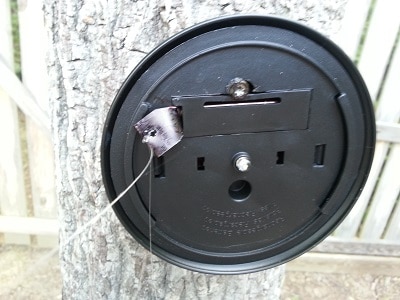 Now – the way this thing works is with the LED pointed outward from the tree(solar part covered) – a piece of tough plastic with a string attached (I like fishing line) is stuck between one end of the battery and the internal contactor.

The end of the string will need to be attached securely. When someone (or some “THING”) walks and “trips” the string, causing the plastic tab to pull out – the battery will then make a complete circuit and the light will come on (only when its dark out). The sensor that detects light can be covered – but I didn’t really see the point. 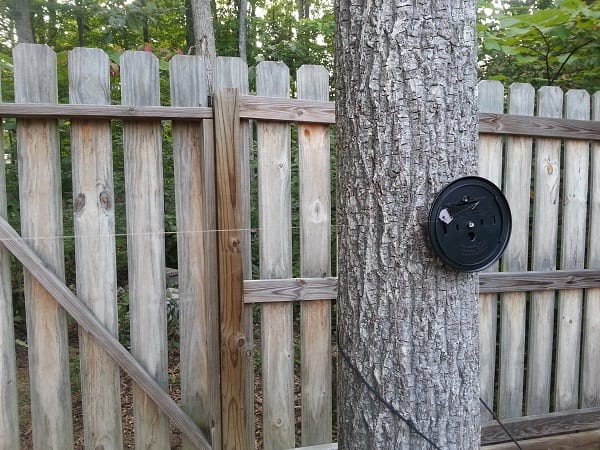 Think about all the places these could be put. You can see in the picture above one is by my back fence. How about several of them all along the top of the fence so that if someone crawled over in the middle of the night the light would shine like a beacon? I think that would work well. 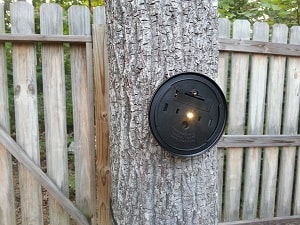 By the way – the one you see in the pictures above have been attached to that tree for over 3 weeks and it has sat in the intense sun as well as torrential downpours – still works just fine.

I see this nighttime perimeter alarm set up as inexpensive as well as effective. In complete darkness with no other lights on – it really stands out. Imagine someone standing watch in a window looking over a large backyard and suddenly one of these lights comes on – they could throw on some larger solar lights to illuminate the area to check out what was there. Now – imagine the same situation without this perimeter alarm. Someone could sneak over the fence and unless they made some noise you might have no idea.

I am working on getting a bunch of these, along with some fishing line, screws, drill bits, and batteries and storing them away in a small tote.

So, what do you think?