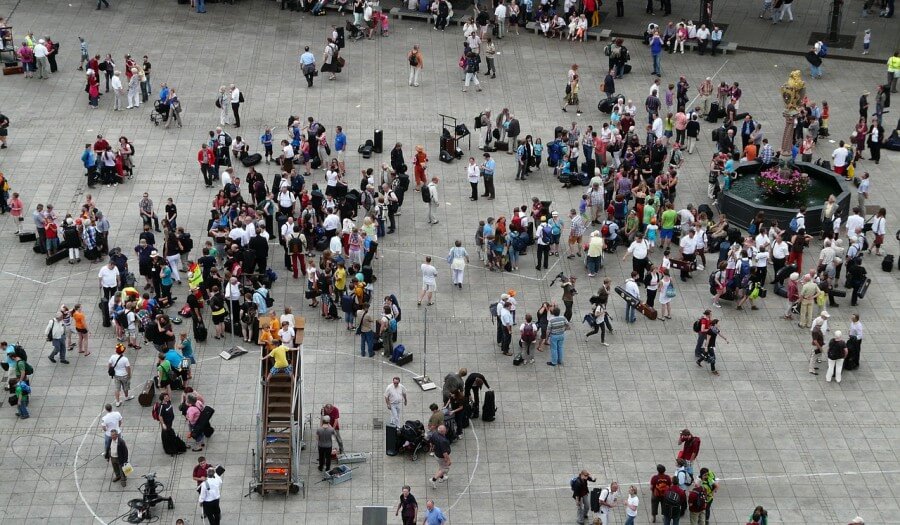 When the SHTF, who will be the first targets of the looters, the rioters, and the panicked idiots who didn’t prepare? The people who did. When the SHTF, you will most likely be prepared.

If you are reading this article it is likely that you will not be short of the necessities of life when it all goes wrong. So those who haven’t got what they need will be looking for you. So you need to hide.

The Gray Man and his Friends

So in a bad situation you need to hide. Obviously this can be accomplished by bugging out, or by simply staying at home, but unless you are entirely self sufficient, you will eventually need to move through a populated area. While doing this you need to be unnoticeable.

According to Kevin Reeve of onPoint Tactical, there are three types of unnoticeable people:

How to become the Gray Man

The attributes of a gray man depend on context. A 5’6” white man in a plain suit and tie, staring at a smartphone is perfectly unnoticeable in an office or boardroom meeting, but will stick out like a sore thumb at a pool party. Think about where you will be and what might be the norm.

In gray man theory, the ‘baseline’ is the standard for the people in the area. Look around, or better yet plan ahead for where you are going to be, and imagine what the people there will look and act like.

Don’t picture a person you know of who works or lives there, because they are an individual, and you want not to be an individual of any kind. Think up average characteristics which fulfill each of the senses:

Finally, how will these people act? This is of equal importance (but less use, as will be made clear below) to how they will look, sound and smell.

You might need to use props to help you look around or move without being noticeable, and it’s good to be prepared with something appropriate.

For example, is this place more of a paper newspaper or a news-on-a-smartphone place? How do these people move? With great purpose, striding along, or slowly, head down and tired? Build as through a picture as possible.

Recognize Your Own Stimuli (and Minimize Them)

Your brain registers huge amounts of sensory data every moment. To be useful though, this has to be filtered, and the white noise removed.

You have probably experienced the classic example of this: at a party of social gathering, someone mentions your name on the other side of the room.

You weren’t listening to their conversation, but you register the name because it is significant to you. To be a gray man you need to be entirely average, just ‘white noise’, and output nothing significant to

Nobody is actually just an average, and you will inevitably have unusual, noticeable features. Start with your body. Height is the biggest one here, and can actually be minimised, if not directly changed.

If you are taller than average, slouch a bit while walking, have your head down and shoulders slumped (a hood can help with this effect).

Do not wear long garments (evening coats, dresses etc.) or the same color on your top and bottom half, as these make you body continuous and accentuate your height.

Horizontal stripes can accentuate your breadth and blur your height. Shorter, looser trousers (even just boot cut rather than skinny jean) make you legs seem shorter and break up your line.

Obviously flatter shoes, ideally which reach a longer way up your leg, will minimize your height, so thin-soled boots are a good idea.

You don’t only have to use your own presentation though, positioning yourself near people taller than you will draw attention away from your height.

Shorter people should do the opposite. Stand up as straight as possible. Wear continuous or similar colors to keep your body-line intact, and tighter trousers to highlight the length of your legs.

Vertical stripes will draw the eyes to you height. Heels or thicker soled shoes will give you more actual height, but be careful not to be too noticeable about it.

Men with facial hair, consider carefully whether it will blend in or stick out in the environment you will be in. Large beards tend to be very noticeable (except among older men) but will hide you face, so consider carefully. Women should not (unless very appropriate for the place) appear sexy or attractive if possible.

Men will notice you a lot more, and you don’t want that. Minimize your bust and don’t display too much skin.

Both genders should remove piercings and try to cover up tattoos (with clothing or a skin mask cream).

Finally, minimize the stimuli of your actions: don’t talk to people or engage in any contact unless absolutely necessary. Don’t make sudden movements or loud noises.

Conform to the Baseline

Having dealt with your own stimulate, you should resemble, as far as possible, a ‘tabula rasa’ (blank slate) human. Now to this you should add or change whatever possible to conform to the baseline you have established.

Be careful. You should not be a perfect example of the sort of person you might meet, but an average.

Hardly under the radar. But while they were looking at the godlike figure of the perfect gym goer, nobody would notice the Average Joe in the corner: average height, average build, lifting average weight as if he’s been coming here a few months.

So dress to the baseline of where you will be. In most urban environments, that means bland, neutral colors without logos or complex patterns. Jeans are almost always a good idea and hoodies and simple jackets are great when appropriate.

Move within the Herd

The baseline should not only include outward appearance, but what everyone else is doing. If all the other people are moving in one direction, follow them, and make your entry and exit as discreet as possible.

Try not to take individual actions which might draw attention, even if you see other people doing so. The reason you have seen them is that they have drawn attention to themselves! Don’t do it!

This is why the way people act is of equal importance, but less use when determining a baseline: it can tell you a lot about the people you want to blend in with, but you often actually need to mimic it.

If you have to leave the herd, try to do so by following a small group who are all splitting off, and in general stay away from the edges of the group if possible. If you must strike out alone, first look around to see if anyone else is doing the same, and imitate the way they do so.

Mask any individual actions you find you must make. This can be done with loud noises around you, or by using a prop like a phone or newspaper to cover looking around.

But Don’t Become the Gray Man!

Of course, when necessary, to appear as a gray man is great, and should be done with care. However, of course you don’t truly want to be an average, unprepared person, just moving with the herd forever.

Making yourself difficult to notice does not mean that you have to jettison all of your preparedness mentality. As a member of the survivalist boards put it:

“A small practical kit for daily carry broken down into categories like comms, medical, light, knife, defense, signaling, etc is still small enough to not attract attention if the user is smart & thinks ahead in terms of what do I REALLY need vs what MIGHT come in handy.”

First Off: EDC. Let’s say you have affected to look like the urban archetypal gray man. If you really think about it, in today’s world this guy is probably a depot worker for somewhere like amazon, or works in a Walmart somewhere, so he’s coming home from work with a backpack.

It’ll be a small, nondescript, unbranded backpack in a neutral color (not an enormous tactical hiking pack or BOB), but it will certainly be big enough to hold a day’s simple food, a spare flashlight, first aid kit, radio and maybe a spare cheap cell phone. Something like this fits the description pretty well.

Conversely, the look of what goes into the pack doesn’t really matter much. You probably want to move through the crowded area as quickly as possible, not needing to use any of the gear in you pack, so it’s only there for emergencies/unforeseen circumstances or for what you intend to do when you reach your destination.

Either way, if something comes up which necessitates your using your first aid kit, or a weapon, or whatever else is in your bag, that situation must be serious enough to take priority over your gray man cover, so it ceases to matter if you first aid kit is in a tactical pouch, people will probably have noticed you anyway!

For the EDC items themselves, again you want to match the baseline as far as possible. Most people who carry a flashlight carry a $2 thing they picked up at a truckstop once and don’t carry spare batteries.

If you want to really blend in, then just go to a truck-stop and buy a $2 light, but you could also buy a decent quality light which look unobtrusive and remove any branding from it, maybe scratch it up a little to fit in better.

For stuff which you keep in your pockets, choose items which will not bulge and will be the least noticeable when used (presuming you keep it in your pockets because you need the most often).

Obviously, don’t open carry a weapon. If you must carry a weapon (ideally you shouldn’t need to as using it will draw a lot of attention to you), then try to find a good way to really conceal it: an excellent concealed holster, a CCW pocket in your pack, or just a very easily pocketed weapon (like the Taurus Curve).

The gray man is not an abstract idea to be kept in reserve until needed, he/she can be useful now. If you are training or preparing for any situation out of the norm then your neighbors and friends should either be helping, or not know about it.

When the SHTF, anybody unprepared might turn on you, so the gray man can mask any preparation you make.

In a true survival situation, you want to be noticed as little as possible. Tacticool pants and guns are certainly useful, but they aren’t very low profile, and might get you hurt at the hands of desperate people.

Staying at home or hiding away is great, but one day you will have to venture out, so go gray and stay safe.

We will not spam you.
Print
3K
Shares