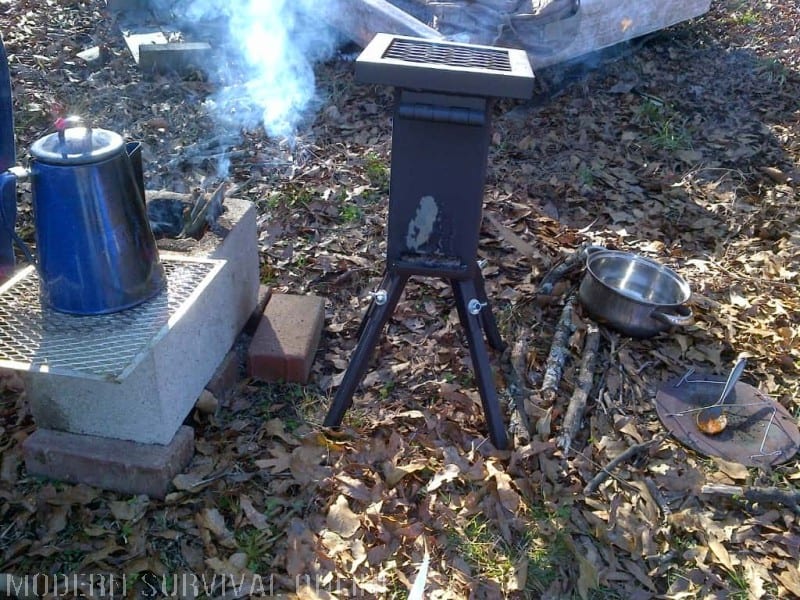 I’ll go on and bet if you’ve got any friends that are heavy into hiking, camping or homesteading you have heard then go on and on at length about rocket stoves, the new marvels of efficient cooking and heating.

Well, got a little spoiler for you: they aren’t new, but boy, oh boy are they efficient! Rocket stoves can be had as an over-the-counter product or built yourself as a DIY project.

No matter how you come by your rocket stove you can rest assured you’re going to get tons of heat on very little fuel. You know, it almost sounds too good to be true. So tell us, Tim: how does a rocket stove work?

Rocket stoves work by drawing in a large volume of cooler air over the burning fuel. This mass of oxygen supply facilitates more complete combustion of fuel particulates that would otherwise go unburned into the air as smoke. By burning the tiny particles that would otherwise escape, rocket stoves not only burn cleanly, but they also burn very hot compared to traditional stoves.

In this way, a rocket stove will furnish a tremendous amount of heat for a little fuel and with virtually no smoke when designed and operated correctly.

Big or small, rocket stoves have the chops for almost any heating task. The ability to do so much work with so little fuel is entrancing for preppers, and it should be! From boiling water in the middle of camp to cooking a huge meal or heating your entire home there is a rocket stove application for you. Read on to learn a little more about these powerful stoves.

Rocket Stoves Do It Better

Considering how easy they are to make you’d think there be some kind of catch with operating a rocket stove. Well, surprise!

There isn’t, unless you consider screaming high temperatures a disadvantage with a stove, and I sure don’t. Below are just a few of the advantages rocket stoves boast over conventional ones.

I know what you might be thinking: if rocket stoves are so great how come so few people use them? It’s a question I often ask myself, reader. I only hope after this article and other sources more preppers in the West will come to appreciate and use the terrific design that is the modern rocket stove.

Anatomy of a Rocket Stove

Rocket stoves are very simple designs. No matter if you plan to buy or build your own, take some time to learn about the design of a typical rocket stove and the principles behind its operation.

They are so easy to build using common materials; you’re doing yourself a major to service if you don’t know how to put one of these bad boys together.

To help yourself understand the operation and design of a rocket stove, start by imagining a capital letter J. if you look at a rocket stove from the side, this is exactly what it looks like inside.

From left to right, you have a short vertical pipe open at the top, a horizontal pipe at the very bottom, and a large vertical pipe, connected to the shorter one by the horizontal pipe. These components are respectively the feed tube (or fuel chamber), the burn tunnel (or combustion tunnel), and the heat riser or chimney.

All those components are usually made out of metal of some kind or high heat tolerance ceramic. All those components will be insulated to hold in heat, increasing efficiency and thoroughness of combustion. This insulation is most often dirt, but can be clay or any other material that will pack & seal tightly around it.

From here operation is a simple puzzle: fuel, most often wood, is placed in the wide open top of the fuel chamber where it is lit and then begins to burn. As the fuel burns, the flames are drawn through the burn tunnel, pushing a great mass of quickly rising hot air through the chimney.

The combustion process begins to suck in more and more cool air for the fuel chamber which makes the fuel burn more completely and therefore hotter.

A hotter burn pushes a greater quantity of air, more quickly, through the chimney drawing in an even greater volume of cool air and the process repeats in a sort of vicious cycle until the fuel is exhausted.

The flames will grow so hot and begin moving so fast there is often an audible whooshing or howling sound created by a rocket stove. By now you’ve probably figured out how they got their name.

In fact, rocket stoves burn so hot and so efficiently that most new operators struggle the most with controlling the heat, not getting enough of it.

By reducing the amount of fuel placed in the rocket stove and a few other tricks you can keep the heat down to a manageable level, assuming you don’t want to turn your tasty dinner into fresh charcoal briquettes.

And remember a properly set up rocket stove is so efficient it will do all of this with virtually no smoke. Recall if you will at the smoke itself is burned up in the combustion process.

The design of a rocket stove allows the burning fuel receives an ample supply of fresh oxygen compared to traditional stoves. This hotter, more complete burn contributes to the vastly higher temperature that a rocket stove can supply, which in turn leads to a drawing in an even greater quantity of oxygen further fueling and sustaining this reaction.

Rocket stoves are easy to make, burn extremely hot, extremely cleanly and on very little fuel. They’re your heat-producing ace in the hole if you are a prepper!

We will not spam you.
Print
158
Shares

2 thoughts on “So, How Does a Rocket Stove Work?”