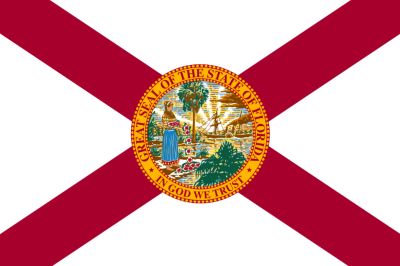 Florida is a broadly benevolent state when it comes to the ownership and carry of all kinds of knives. You can carry pretty much any kind of knife you want so long as it is carried openly, and a standard concealed weapons permit from the state of Florida, or a recognized permit from another state will allow you to carry nearly any type of knife concealed.

If there is one quirk that you should be aware of in the State of Florida is that their preemption law only preempts local and municipal laws for people who have a concealed weapons permit already.

If you have a permit, you do not have to abide by the municipal laws that are more stringent than the state laws. If you don’t have a permit, tough; you’ll have to play by local town and county rules.

This is a bit of a disappointment in an otherwise staunchly pro-second amendment and pro-knife state but all-around Florida is very accommodating when it comes to knives.

You may own any type of knife in the State of Florida except one: ballistic knives. Ballistic knives are a type of knife that actually expels their blade as a projectile via the use of spring action, compressed gas, elastic or some other type of mechanism.

Thanks to some sloppy language in the statutes switchblades and many assisted opening knives were once upon a time incorrectly included in the definition of ballistic knife, though this has not been the case for nearly twenty years in the state.

Also specifically allowed for ownership are all other kinds of knives including dirks, daggers, butterfly knives, bowie knives and so on, though to carry concealed anything except a common pocket knife will require a permit. See below.

The only type of knife that one may carry in Florida without a concealed weapons permit is any knife that is specifically not a deadly weapon. What kind of knife fails to qualify as a deadly weapon? The answer in the state statutes is a “common pocket knife”, the definition of which requires a fair amount of explanation if you want to carry one with certainty in Florida.

Since the state does not have a specific definition of common pocketknife, we are left to rely on two potential explanations: The common definition, or the informed opinion based on prior decisions and case law.

Generally speaking, based on prior case law in Florida a common pocket knife is defined as “ a type of knife occurring frequently in the community, which has a blade that folds into the handle and they can be carried in one’s pocket”.

Specifically, a common pocket knife “will lack a combat style grip”, “a notched combat-style grip” or a “large metal hilt or handguard”.

These explanations might do more harm than good if we are trying to figure out whether or not our folding knife is a common pocket knife or just a folding deadly weapon: what is a combat style grip?

Is it a certain shape, a certain texture, or does it have certain features or specific proportions? What notches are being referred to?

A metal hilt or handguard is easy enough to define, and is a rare feature on pocket knives unless the judge were to classify any protuberance which might keep the hand from slipping onto the edge as such.

It is the lack of clearly defined definitions and restricted features that makes the commonly encountered term “common folding pocket knife” so nebulous and tricky to apply with accuracy.

You may carry virtually any kind of knife you want in the State of Florida so long as you have a concealed weapons permit. Ballistic knives are still forbidden, however. The State of Florida will recognize their own permit, naturally, and also the permit from any state with which they have reciprocity.

Of particular note, Florida is generally highly permissive about when and where you can carry your otherwise legally carried knives in the state.

Florida allows the open carry of any kind of knife so long as it is otherwise illegal in the state. Essentially, no ballistic knives once again.

One may not carry any weapon, including knives, with or without a permit to any police or Sheriff’s department building, any detention facility or jail, any courtroom, any polling place, any school athletic event, any elementary, secondary or university school facility or building, or into any bar or any portion of a restaurant that serves alcohol, and lastly into the sterile security area or passenger terminal of any airport.

Florida is overwhelmingly an excellent state with regards to the carry of knives, though the reliance on obtaining a concealed weapons permit in order to carry legally the widest possible array of knives is a bit of an annoyance.

The only other negative marks regarding our review of the state laws is the lack of a concise definition for a common pocket knife, and the fact that state preemption only applies if one has the aforementioned concealed weapons permit.

Even in a pro-knife and pro self-defense state like Florida you have to know the letter of the law as it is written. Ignorance is never an excuse or an affirmative defense!

(1) It is unlawful for any person to manufacture, display, sell, own, possess, or use a ballistic self-propelled knife which is a device that propels a knifelike blade as a projectile and which physically separates the blade from the device by means of a coil spring, elastic material, or compressed gas.  A ballistic self-propelled knife is declared to be a dangerous or deadly weapon and a contraband item.  It shall be subject to seizure and shall be disposed of as provided in s. 790.08(1) and (6) .

(2) This section shall not apply to:

(a) Any device from which a knifelike blade opens, where such blade remains physically integrated with the device when open.

(b) Any device which propels an arrow, a bolt, or a dart by means of any common bow, compound bow, crossbow, or underwater spear gun.

(12)(a) A license issued under this section does not authorize any person to openly carry a handgun or carry a concealed weapon or firearm into:

3. Any detention facility, prison, or jail;

7. Any meeting of the governing body of a county, public school district, municipality, or special district;

8. Any meeting of the Legislature or a committee thereof;

9. Any school, college, or professional athletic event not related to firearms;

10. Any elementary or secondary school facility or administration building;

14. The inside of the passenger terminal and sterile area of any airport, provided that no person shall be prohibited from carrying any legal firearm into the terminal, which firearm is encased for shipment for purposes of checking such firearm as baggage to be lawfully transported on any aircraft; or

15. Any place where the carrying of firearms is prohibited by federal law.

790.25 Lawful ownership, possession, and use of firearms and other weapons.

(a) This section does not authorize carrying a concealed weapon without a permit, as prohibited by ss. 790.01 and 790.02.

(3) LAWFUL USES.—The provisions of ss. 790.053 and 790.06 do not apply in the following instances, and, despite such sections, it is lawful for the following persons to own, possess, and lawfully use firearms and other weapons, ammunition, and supplies for lawful purposes:

(4) CONSTRUCTION.—This act shall be liberally construed to carry out the declaration of policy herein and in favor of the constitutional right to keep and bear arms for lawful purposes. This act is supplemental and additional to existing rights to bear arms now guaranteed by law and decisions of the courts of Florida, and nothing herein shall impair or diminish any of such rights. This act shall supersede any law, ordinance, or regulation in conflict herewith.

(5) POSSESSION IN PRIVATE CONVEYANCE.—Notwithstanding subsection (2), it is lawful and is not a violation of s. 790.01 for a person 18 years of age or older to possess a concealed firearm or other weapon for self-defense or other lawful purpose within the interior of a private conveyance, without a license, if the firearm or other weapon is securely encased or is otherwise not readily accessible for immediate use. Nothing herein contained prohibits the carrying of a legal firearm other than a handgun anywhere in a private conveyance when such firearm is being carried for a lawful use. Nothing herein contained shall be construed to authorize the carrying of a concealed firearm or other weapon on the person. This subsection shall be liberally construed in favor of the lawful use, ownership, and possession of firearms and other weapons, including lawful self-defense as provided in s. 776.012.