Light. Probably one of the very first things a prepper considers when making a list of supplies to stock up on in case of an emergency. That famous lined, yellow notebook is brought out and at the very top “flashlights” is written, followed by “batteries”, “food”, “water”, etc.

Almost half of every single day the sun is shining on the other side of the Earth, while we bask in darkness. In today’s world due to significant technological advancements “flashlights” are shining brighter for a longer period of time than ever before.

Often overlooked when considering emergency lighting are headlamps. Headlamps provide hands-free illumination of an area or object. Being able to have both hands available to manipulate door hands, a tire iron, a firearm, or whatever is highly advantageous.

The Zebralight H502 is an advanced light powered by one single AA battery. Unique to the H502 is the dual-use capability in that it can be carried and used like a traditional flashlight or inserted securely into the headband for hands free application.

Right out of the box the Zebralight exuded quality. Fit and finish looked fantastic. The headband itself also seemed like a quality build. Instructions regarding the Zebralight were included and like most men – I quickly chucked them to the side. I wanted to open this thing – get a battery in it and see it shine. 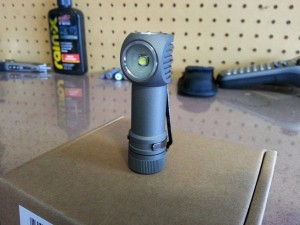 I obtained one Ray-O-Vac alkaline AA battery from my stash, installed it and began to play with the flashlight. Turning it on was easy – a simple push of the button on top of the light was all it took. Turning it off was not. I had to go back and retrieve the instructions with my manhood in check as I could not figure out how to shut it off. 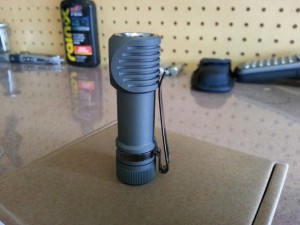 Here is the lowdown on the operation of this sophistication peice of equipment:

There are three levels of brightness – high, medium and low. There is an additional strobe feature as well. To access each brightness level the button is pressed in rapid secession until desired brightness level or strobe is reached. Once it is done a couple times it is very easy. To shut it off -you simply click the button with quick “click” and the light goes off.

It really is pretty simple (once you read the directions). 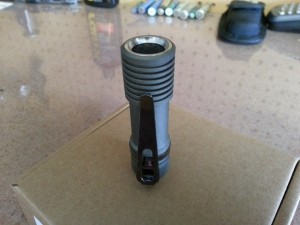 This compact but powerful light includes a small but very strong and durable clip. Perfect fr attaching to a pocket, shirt pocket, belt – whatever. I likely would just stick it in my pocket as clipping it to hang somewhere could lead to it falling and being lost. 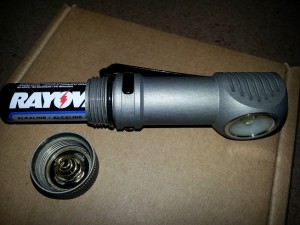 As mentioned – I used a Ray-O-Vac AA alkaline battery for my testing. It is recommended for optimal performance to use Lithium AA batteries. Due to the cost – I have not tried that yet. 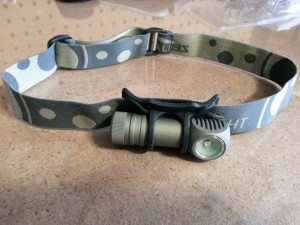 Overall – the light itself is impressive. I decided to try the headband next. The Zebralight H502 is attached to the headband via to rubber rings – which hold it securely. The clip should be taken off prior to insertion.

Once mounted – the headband should be adjusted to fit the wearers head. The band is fully adjustable and fits snugly due to its stretchable characteristics.

Once everything is set up – it is ready to rock ‘n roll. Lightweight and super powerful – great for inclusion in a bug out bag, car glove box, or in the nightstand. 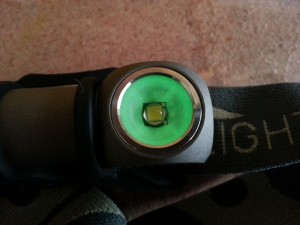 Now – to performance. This thing is bright – super bright.  Most every single flashlight I own is very bright and shines with a focused beam. This light is different in that its beam is widespread. At its highest setting the LED shines at 260 lumens. At 260 lumens the light will last approx. 1 hour.

At a lower 160 lumens one AA alkaline battery will last almost 2 hours. While at an even lower 100 lumen setting almost 3.5 hours can be attained.

One thing I found to be such a great idea it the recess around the LED glows after it is shut off. There is actually enough light from that glow in total darkness to open another battery pack and re-power the light. Great thinking!!

Taking the light outside at night really shows its usefulness. I was able to illuminate a wide area as I walked around. Plenty of light which to work on a car, move firewood to my firepit, get something out of my shed – or whatever.

I highly recommend the Zebralight H502.