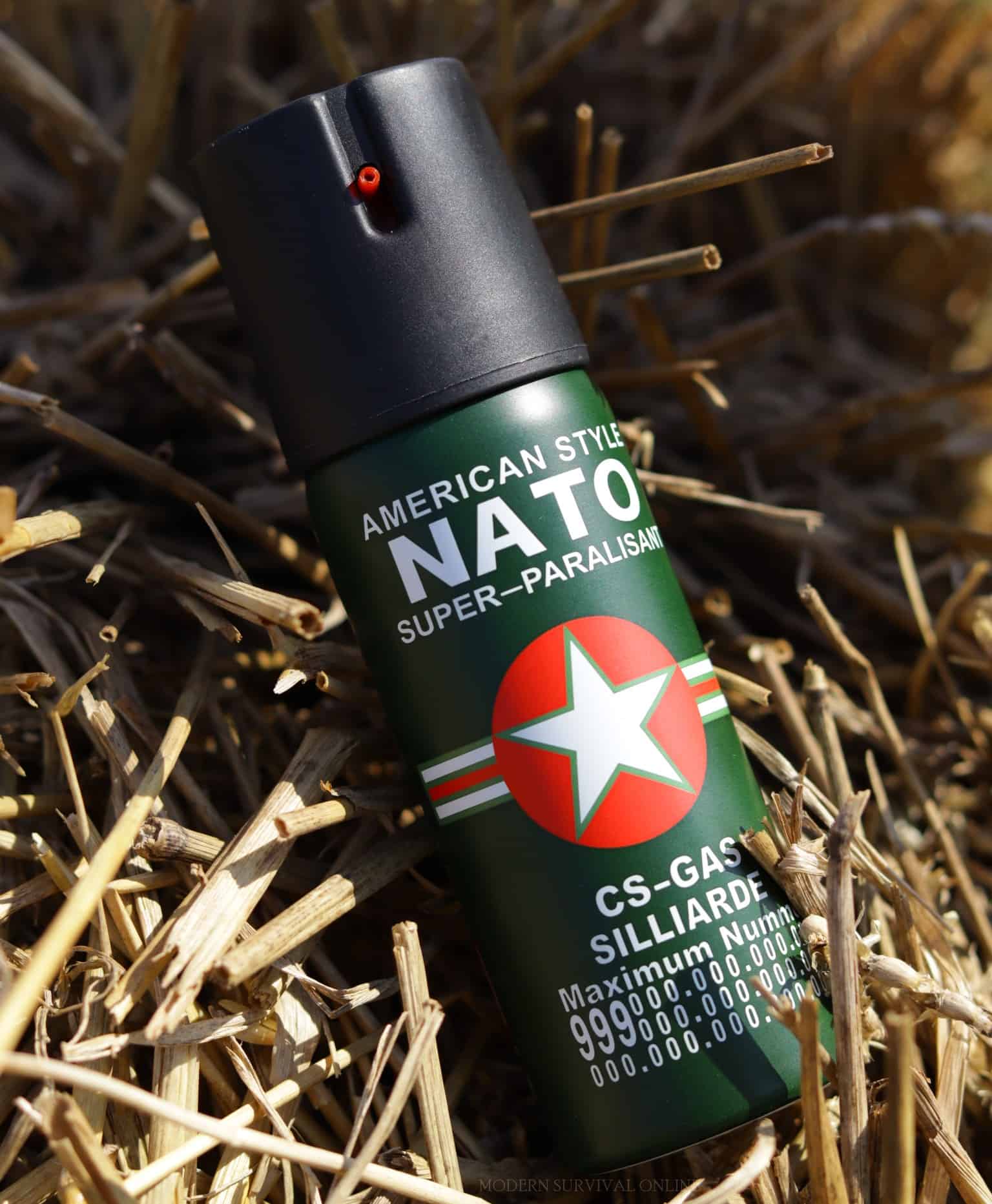 The use of force continuum ranges from Command presence, in which your very presence deters aggression, all the way up to lethal force.

Between these two far ends of the spectrum are less-than-lethal self-defense tools, including a Taser, Stun Gun, or Pepper spray.

Pepper spray, more technically known as OC (Oleoresin Capsicum) spray, is a viable alternative for self-defense; it is classified as less-than –lethal, in that it is highly unlikely to cause death or serious injury. OC spray can temporarily incapacitate an attacker, buying you time to escape.

Pointing a canister of OC at someone with your thumb on the button and a stern warning to back off may be enough to dissuade some individuals.

OC is also useful it than it is far less regulated than firearms, and therefore more accessible, and it is an option for someone who has decided beforehand they could not use a gun to defend themselves. OC is one of many options for a self-defense spray.

Other types of self- defense sprays

This is not yet available for civilian use as of the date of this article. (Summer 2018). It is based on wasabi horseradish instead of OC. It produces more or less the same effects as OC, but is very short acting; about 10 minutes vs. 45. Thinking of how much a small amount of wasabi paste burns, this has got to hurt.

Wasabi also produces a different kind of burn. I feel hot peppers mostly in my mouth, as a nice red hot glow that burns for a few minutes.

Wasabi burns my nose and somehow, the back of my neck in a white hot glow that only lasts for seconds, but it is much more intense.

CS is classified as a chemical irritant, and is commonly known as tear gas. It is a powder which when raised to its melting point releases a vapor which reacts with water to make an acid. CS is irritating to the skin and mucus membranes.

CS will cause a burning sensation, tearing of the eyes, coughing, excessive mucous production, e.g., strands going from your nose to the ground, and may cause vomiting and choking, and loss of bladder control.

Basically, whatever fluids are inside you will unpleasantly emerge through the nearest convenient orifice. It will be especially irritating if skin is wet or perspired, and will cause acute burning under wristwatches, other jewelry, or eyeglasses.

People who have been exposed to it say it is quite incapacitating. It is short acting, and is minimally effective against dogs’ bears, or sasquatches, as they have no lacrimal glands, or tear ducts.

I just wanted to see if you were paying attention. I do not actually know whether or not sasquatches can cry.

CN is commonly referred to as Mace. CN is made of crystals in a pressurized liquid medium, typically propelled by nitrogen gas. It can have a delayed onset of action for up to 30 seconds, and causes the eyes to burn and water.

This should not be confused with Mace brand OC spray. This is a brand name, but has fallen into generic use for any type of irritating chemical spray.

Bear spray comes in a much larger container (about 8 0z. vs. 3 oz. or less) than most canisters of OC, and is more of a fogger than a spray. It is designed to put up an OC shield between you and the bear.

Both compounds are minimally toxic to humans, and will produce stinging, burning, itching, tingling and numbness if they come in contact with exposed skin.  It will not be of a high enough intensity to deter most people intent on doing violence.  It is also a violation of federal law to use an insecticide “in a manner inconsistent with its labeling” For a self-defense spray, stick with OC.

This is a synthetic form of OC used by law enforcement in the UK.

This is a joke. It is a non-irritating dye/paint which you spray on the bad guy. The idea is it will “disorient them and dissuade them from further aggression”.

When they run away, the police will be able to identify them as your attacker as they will be painted. The only advantage this has is it can be carried in jurisdictions where OC cannot. Used by civilians in the UK.

MPK (pelargonic acid morpholide) is used in Russia, and is another synthetic analogue of OC.

PSI Poly Spray Imobilizante is a lachrymatory spray based on lemon and onion extracts and is used in Brazil.

While the other self-defense sprays have their advantages and limitations, we will focus on OC as it is one of the most effective and commonly available.

Before buying pepper spray, know the law regarding purchase, possession, carry, and use in your jurisdiction.

Oleoresin capsicum is the extract from hot peppers. OC is an oily liquid, partly water soluble, with a maximum of 15% active ingredient and a rating of about one to three million Scoville units. The Scoville scale is a rating scale of the relative heat perception from capsicum. See the link below for a look at the Scoville scale.

A neurotoxin typically effects the central nervous system, or the nerves of the brain and spinal cord, which are responsible for the command, control, and communication of the entire body.

OC will produce a burning sensation on any bare skin it contacts. It causes your mucous membranes in your nasal cavity to produce heavy amounts of mucous, and your eyes to tear, and reflexively clamp shut. The subject who is exposed will be incapacitated for 30 to 45 minutes and the effects can persist to a lesser degree for up to three or four hours, producing prolonged discomfort. OC will cause temporary inflammation, but it does not damage tissue.

A canister of OC is not a magic charm that will repel evil. It is a tool, fraught with limitations.

The effects of OC may not be felt for up to 15 seconds. A violent individual can do a lot of damage in that time.

Most people will be stopped or deterred by OC, depending on their level of motivation to attack you, and their pain tolerance. There have been numerous documented cases and many more anecdotal ones of individuals sprayed or even saturated with OC who did not respond.

The OC stream may also be blocked by eyewear or from what I am told, a skateboard used as a makeshift shield.  Some lots of OC should have failed quality control, but made it to the shelf, and are too weak to have an incapacitating effect.

Ask anyone in law enforcement or corrections, or otherwise involved with the criminal justice system and they will have a story of someone they hosed down with OC and it had no effect. For that matter, Binge-watch COPS and you will see suspects exposed to pepper spray with no effect or a delayed effect.

There are three main options for OC delivery systems, or the means by which the spray, foam, or gel gets on the bad guy.

Get live training. Reading and video is an introduction, or supplement to training. Here are links to videos to give you get you started and to provide some further information.

OC is a less than lethal option on the continuum of force. It always you to defend yourself at a distance, incapacitate your attacker so you can escape, and generally will not permanently harm your attacker. There are a number of options available for both the type of OC and the delivery system.

We will not spam you.
Print
108
Shares