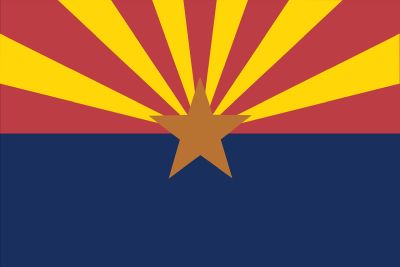 Arizona is a generally easygoing state when it comes to knife ownership and the carry of knives, with one small point of contention: only pocket knives are legal to concealed carry without a permit if you are under the age of 21, and the word “pocketknife” is not confidently defined within the state’s laws.

So long as you are not breaking any other laws you can concealed carry all kinds of knives in Arizona.

Arizona also exercises rigorous statewide preemption of local knife laws that are more stringent than the state standard, and that means you can carry your knife that is otherwise legal confidently as you travel and move about the state.

Arizona is a state with very few restrictions on what type of knife you can own, as well as any other essential characteristics pertaining to the knife.

You can have any kind of folding knife, automatic knife, dagger, bowie, gravity knife, machete and so on. pretty much every kind of knife is legal to own, legal to carry (with few exceptions) and legal to sell or transport.

This is one of the few states where pretty much any kind of knife qualifies as a potentially deadly weapon, but the carry of deadly weapons is explicitly allowed under the state constitution and state statutes.

We will get into a little more detail on all of these in the sections below.

Concealed carry of knives in the state of Arizona while lacking a concealed weapons permit is entirely legal so long as you follow a few restrictions.

First, only a common pocket knife may be carried on or about someone’s person concealed if they are under the age of 21.

This also applies to in one’s vehicle. If underage any knife meeting the definition of deadly weapon would not be legal to carry concealed.

This might be a little problematic for people living and traveling in Arizona because “pocket knife” is not readily defined in the state statutes. Is a common stockman knife or trapper knife considered a pocket knife or a deadly weapon?

Certainly any knife may be used as a deadly weapon, so this is not as easy a question to answer as one might think. If this sounds like nitpicking, it definitely is, but these legal definitions are critically important to understanding and staying on the right side of the law.

Aside from the age restriction, if you are carrying any knife concealed on or about your person or within your vehicle you must disclose the fact truthfully to a law enforcement officer if he or she asks. Failing to do so is a crime.

Aside from that, only people who are a prohibited person, typically meaning a felon, are forbidden from carrying knives and other deadly weapons in the state of Arizona.

One must also not transfer any deadly weapon to a prohibited person lest they commit a crime by doing so.

It also does not give you carte blanche to carry in a restricted area if specifically asked by the operator, the owner of the establishment, or the event to secure your weapon.

Arizona does not forbid weapons in many places but it does grant wide latitude to the operators of public businesses to control what weapons are allowed on premises, and if they seek to disarm people entering the premises they must provide secure storage for any weapons checked.

Be sure to check out the legal statutes at the end of this article for more details on that.

Besides that, you may not carry your knife on to any school or school grounds, into or onto any place where polling is taking place on Election Day, and onto the grounds of any nuclear or hydroelectric power plant.

Arizona is among the very best states when it comes to citizens’ rights to carry weapons of all kinds, knives certainly among them.

The only thing you can really take away from Arizona is the fact that “pocket knife” is ill-defined in the state statutes, and it is the only category of knife that may be safely and legally carried concealed on or about someone’s person if they are under the age of 21.

This might sound like a small issue, but it does open up the possibility that a humble folding knife that appears too large, too long or just looks aggressive might get someone in trouble.

But, assuming you are over the age of 21, and you make sure to always tell a law enforcement officer that you are carrying if you are asked, you won’t have any trouble carrying whatever you want in the state.

Below is a selection of Arizona’s most important and most relevant statutes regarding the carry of knives, but this is in no way a completely comprehensive list.

Make sure you read all of these statutes, understand them and consult with an attorney if you have any questions:

A. In this chapter, unless the context otherwise requires:

1. ” Deadly weapon” means anything that is designed for lethal use. The term includes a firearm.

(a) Includes the following:

(List removed for brevity. No kind of knife is specifically forbidden in the state of Arizona.)

A. A person commits misconduct involving weapons by knowingly:

1. Carrying a deadly weapon except a pocket knife concealed on his person or within his immediate control in or on a means of transportation:

(b) When contacted by a law enforcement officer and failing to accurately answer the officer if the officer asks whether the person is carrying a concealed deadly weapon; or

2. Carrying a deadly weapon except a pocket knife concealed on his person or concealed within his immediate control in or on a means of transportation if the person is under twenty-one years of age; or

3. Manufacturing, possessing, transporting, selling or transferring a prohibited weapon, except that if the violation involves dry ice, a person commits misconduct involving weapons by knowingly possessing the dry ice with the intent to cause injury to or death of another person or to cause damage to the property of another person; or

4. Possessing a deadly weapon or prohibited weapon if such person is a prohibited possessor; or

5. Selling or transferring a deadly weapon to a prohibited possessor; or

6. Defacing a deadly weapon; or

8. Using or possessing a deadly weapon during the commission of any felony offense included in chapter 34 of this title; or

9. Discharging a firearm at an occupied structure in order to assist, promote or further the interests of a criminal street gang, a criminal syndicate or a racketeering enterprise; or

1. A peace officer or any person summoned by any peace officer to assist and while actually assisting in the performance of official duties; or

4. A person specifically licensed, authorized or permitted pursuant to a statute of this state or of the United States.

B. This section does not apply to the licensed premises of any public establishment or public event with a license issued pursuant to title 4.

11. Unless specifically authorized by law, entering an election polling place on the day of any election carrying a deadly weapon; or

12. Possessing a deadly weapon on school grounds; or

13. Unless specifically authorized by law, entering a nuclear or hydroelectric generating station carrying a deadly weapon on his person or within the immediate control of any person; or

2. ” Public establishment” means a structure, vehicle or craft that is owned, leased or operated by this state or a political subdivision of this state.

A. Except as provided in subsections C and D, a political subdivision of this state shall not enact any ordinance, rule or tax relating to the transportation, possession, carrying, sale, transfer, purchase, gift, devise, licensing, registration or use of a knife or knife making components in this state.

C. This section does not prohibit a political subdivision of this state from enacting and enforcing any ordinance or rule pursuant to state law, to implement or enforce state law or relating to imposing any privilege or use tax on the retail sale, lease or rental of, or the gross proceeds or gross income from the sale, lease or rental of, a knife or any knife components at a rate that applies generally to other items of tangible personal property.

E. A political subdivision’s rule or ordinance that relates to knives and that is inconsistent with or more restrictive than state law, whether enacted before or after the effective date of this amendment to this section, is null and void.

F. For the purposes of this section:

1. ” Knife” means a cutting instrument and includes a sharpened or pointed blade.